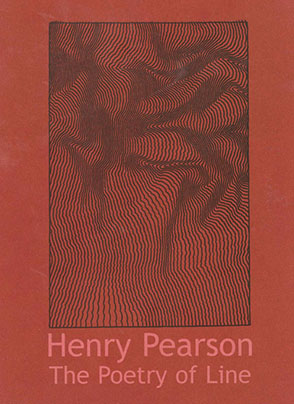 Henry Pearson is often linked to the Op Art movement of the 1960s because his best-known paintings feature a labyrinth of undulating parallel lines. Yet his work, although included in the landmark exhibition of 1965, "The Responsive Eye," has an intuitive rhythm and poetic elegance that fall well outside the calculated, often hard-edged structures favored by most Op artists. World War II interrupted Pearson’s first career in theater design but led to a prolonged contact with Japanese culture and a passion for painting.

Back in New York City, Pearson studied at the Art Students League and, as early as 1959, began to develop drawings he had made during the war from secret Japanese survey maps. Gradually, he transformed a topography of mountains and valleys into nonobjective forms that reflect a personal vision and herald a new era of linear abstraction in his work. The Poetry of Line accompanied an exhibition of Pearson’s drawings from 1959 to the mid-1970s, the years when the artist moved toward geometric abstraction. This work is crucial from the standpoint of draftsmanship because it achieves a status above that of a sketch or study and makes an artistic statement at once complete and intimate.