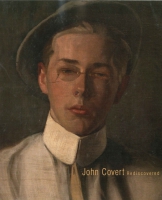 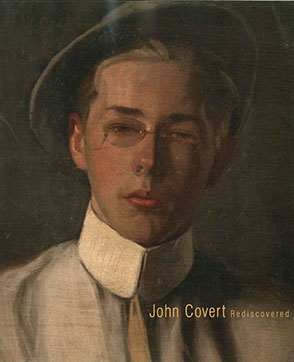 “The great artist of tomorrow will be underground.”—Marcel Duchamp ,

Although little known today, John R. Covert (1882–1960) played a pivotal role in the development of American modernism. He was a founder of the Society of Independent Artists, an active participant in the Société Anonyme, and produced innovative paintings and collage-constructions that reflect his experiences of the renowned art collection of his cousin, Walter Arensberg. Yet, in 1923, Covert broke off his association with key modernists like Marcel Duchamp and Charles Demuth, closed his New York studio, and went to work as a salesman for the Vesuvius Crucible Company of Pittsburgh. Generally, the artist’s story is thought to end there, but John Covert Rediscovered, published in conjunction with an exhibition of the same name organized by the Palmer Museum of Art, shows that Covert never abandoned his artistic endeavors even if he did spend the last decades of his life at the periphery of the art world.

Drawing on Covert’s daybooks (recently conserved at the Philadelphia Museum of Art) and art in the collection of the late Charles Covert Arensberg, John Covert Rediscovered not only establishes that Covert continued his artistic explorations long after his supposed retirement in 1923 but also introduces several hitherto lost works. No less surprising and significant is its revelation that Covert became a filmmaker and prolific photographer, working both within and against modernist ideas of the image.

In his introduction, Leo G. Mazow presents a new view of Covert’s multifaceted activities, including his exercises in secret writing and cryptography. John Covert Rediscovered also contains an essay by Michael R. Taylor that breaks new ground by tracing Covert’s "conversion" to modernism back to his life in Munich and Paris during the turbulent years leading up to World War I. All the art in the exhibition is reproduced in this publication, the value of which is further augmented by Leo Mazow’s informative commentaries on each art work.

The exhibition, "John Covert Rediscovered," organized by the Palmer Museum of Art, has also been shown at The Demuth Foundation and will be at the Suzanne H. Arnold Gallery, Lebanon Valley College, August 28–October 12, 2003.

“The great artist of tomorrow will be underground.”—Marcel Duchamp ,

Leo G. Mazow is Curator of American Art and Affiliate Assistant Professor of Art History at The Pennsylvania State University.

Michael R. Taylor is Associate Curator of Modern and Contemporary Art at the Philadelphia Museum of Art.