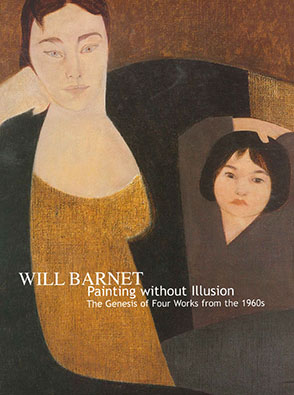 Will Barnet (1911–), much like Chuck Close and Alex Katz, has approached painting through sustained exploration of the relationship between abstract, geometric forms and the processes of perception. In this book, which accompanied an exhibition of the same name at the Palmer Museum of Art and the Alexandre Gallery, Patrick J. McGrady examines the paintings, drawings, and prints Barnet made in the 1960s, the decade when Barnet portrayed his family and renegotiated his commitment to pure abstraction.

As McGrady traces work during this decisive period in Barnet’s career, he shows how drawing became increasingly important in the evolution of such major paintings as Mother and Child, The Blue Robe, and Eden. In addition, McGrady provides a richly documented discussion of critics’ responses to the profound changes in Barnet’s art and Barnet’s own commentary on his goals as an abstract artist.

Will Barnet illustrates many of the forty-nine works in the 2003 exhibition and includes a checklist of the exhibition as well as reproductions of comparative works.