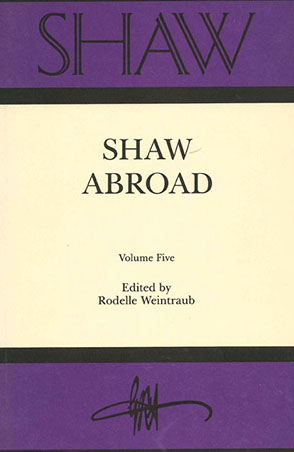 Shaw's first travels were to Bayreuth as a Wagner pilgrim and to Holland and Belgium for their art and theater. Italy was next, and the result was Shaw's self-styled "Pre-Raphaelite" play, Candida. Shaw visited Sweden and met the irascible Strindberg, whose notorious plays he admired, and returned many times to Ireland—"John Bull's Other Island"—as tourist and self-exile. Crossings to France—a nation he disliked with Anglophilic intensity—led to Saint Joan and The Six of Calais, while visits to Italy in his sixties and seventies are seen here, in a remarkable exploration certain to stir controversy, as a last surging of Shaw's banked amorous fires, with repercussions in the later plays.

In his later travels Shaw became enmeshed in other countries' politics, sometimes deliberately, sometimes unawares; he was a political myopic in Russia, a pawn in Yugoslavia, a gadfly in Japan as well as in Hong Kong and China, and a prophet in South Africa, where he wrote The Black Girl in Search of God. Voyages to India and New Zealand led to his mystical and misunderstood The Simpleton of the Unexpected Isles. In the United States he spoke from the stage of the Metropolitan Opera, hobnobbed with cinema stars in Hollywood, and admired—if nothing else in America—the Grand Canyon.

Included is a little-known article by G.B.S. on how to cross Switzerland speedily by auto without being picked up by the police, and a typically cantankerous pair of interviews on visiting the Holy Land.

A WAGNER PILGRIM: GBS IN GERMANY 5

A HIGH WIND TO JAMAICA 37

CROSSING SWITZERLAND: THUN TO ZÜRICH. THE TRUTHS ABOUT THE BRÜNIG PASS AND THE SPEED LIMITS 63

A POLITICAL GAME: SHAW IN YUGOSLAVIA 115

MYOPIA OR UTOPIA? SHAW IN RUSSIA 125

SEEKING THE UNKNOWABLE: SHAW IN INDIA 181

SHAKING THE EARTH: SHAW IN JAPAN 239

“THAT AWFUL COUNTRY”: SHAW IN AMERICA 279

“IF I SHOWED MY TRUE FEELINGS”: SHAW IN

THE LIFE AS A BIBLIOGRAPHY 319

A CONTINUING CHECKLIST OF SHAVIANA325