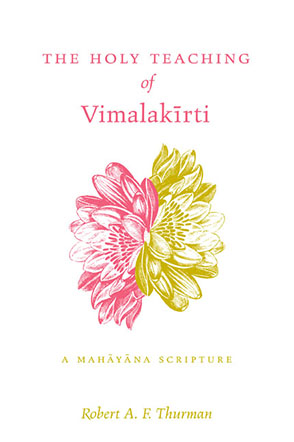 Robert Thurman’s translation makes available, in relatively nontechnical English, the Tibetan version of this key Buddhist scripture, previously known to the English-speaking world only through translations from Chinese texts. The Tibetan version is generally conceded to be more faithful to the original Sanskrit than are the Chinese texts. The Tibetan version also is clearer, richer, and more precise in its philosophical and psychological expression. The books of the sūtra are accompanied by an introduction by Dr. Thurman and by three glossaries: Sanskrit terms, numerical categories, and technical terms.

Robert A. F Thurman, who was ordained a Buddhist monk in 1964 by Tenzin Gyatso, the current Dalai Lama, is the current director of Tibet House in New York City. He is the father of five children, including the actress Uma Thurman. One of the world's most respected scholars and translators of Tibetan and Sanskrit, Thurman has translated The Tibetan Book of the Dead (1994) and is the author or translator of many books, including The Central Philosophy of Tibet: A Study and Translation of Jey Tsong Khapa's Essence of True Eloquence (1984), Speech of Gold: Reason and Enlightenment in Tibetan Buddhism (1989), Inside Tibetan Buddhism (1995), and Infinite Life: Seven Virtues for Living Well (2004). This book was published in cooperation with The Institute for Advanced Studies of World Religions.