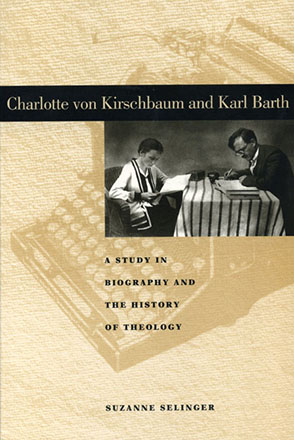 Drawing upon published and unpublished sources that include their own writings, the observations of contemporaries, and correspondence with people who knew them, Suzanne Selinger seeks to describe the collaboration in a multidimensional way. Von Kirschbaum gave a series of lectures in 1949, published in the same year, on women in the perspective of Scripture, theology, and the church. In the three volumes of Barth's Church Dogmatics that deal with humankind, including the male-female relationship as the locus of the image of God, Barth cites von Kirschbaum's scholarship. The subject inevitably reflects upon their own relationship. Moreover, it is just this subject—the anthropology of gender—that has been the source of the categorical rejection of Barth by many feminists.

The author—a Barthian, a feminist, and a trained historian—addresses the concerns of Barth's critics by agreeing deeply with them in part but also by insisting upon understanding Barth and von Kirschbaum contextually. This means biographically and in relation to early German feminism (a phenomenon little known in the English-speaking world), the intellectual movement known as dialogical personalism, and the background of everything Barth and von Kirschbaum wrote or thought in their work together: the steady, threatening growth of the Nazi state, World War II, and the postwar German situation.

Suzanne Selinger is Theological Librarian and Associate Professor of Historical Theology at Drew University and author of Calvin Against Himself: An Inquiry in Intellectual History (1984).