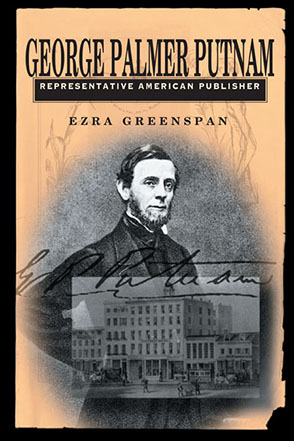 “A fascinating portrait. This book brings G. P. Putnam to life and contributes in important ways to our understanding of American publishing history. ”—Robert J. Scholnick, College of William and Mary

George Palmer Putnam (1814–1872) was arguably the most important American publisher of the nineteenth century, a man fully and multiply involved in developments transforming all aspects of literary culture. In this comprehensive cultural biography, Ezra Greenspan offers a wide-ranging account of a rich, productive life lived in print, interrelating Putnam’s life with the life of his family (one of the most remarkable of its time), with the changing patterns of life in New York City and the nation, and with the institutionalization of modern print culture in nineteenth-century America.

Putnam’s roles and achievements were many: he established and ran the publishing house of G. P. Putnam’s in New York City; published many of the leading American antebellum writers, male and female, canonical and noncanonical (indeed, was responsible for the first act of American canonization—of Washington Irving); was the leading publisher of art books in his time and launched Putnam's Monthly; led efforts resulting in the institutionalization of the American publishing industry and was the most outspoken promoter of American authorship; led the fight in the United States for international copyright; was the first American publisher to open an overseas (London) branch office; and for a decade was the leading American agent in the international book trade.

Putnam’s achievements were not limited to his professional sphere: he was also the founding Superintendent of the Metropolitan Museum of Art, the official publisher to the New York World's Fair of 1853, the Commissioner of the Internal Revenue in New York City during the Civil War, and the organizer of the greatest authors-publishers dinner ever given in nineteenth-century America. Friend and confidant to many of the leading figures of his time, he was not simply a centrally placed publisher but was one of the most centrally placed people of his entire society.

This study is based on meticulous archival research into not only Putnam's own papers but into the records of his business, the papers of other family members, and the archives of persons with whom Putnam had contact through business and social networks. In a finely detailed narrative, Greenspan weaves together the story of Putnam's life and that of the development of print culture in nineteenth-century America to offer an ambitious, comprehensive biography of this "representative American publisher."

“A fascinating portrait. This book brings G. P. Putnam to life and contributes in important ways to our understanding of American publishing history. ”—Robert J. Scholnick, College of William and Mary

“Under a deceptively bland title, Ezra Greenspan has written a meticulously researched, elegant, important book, which should be read carefully by anyone interested in the hard work and imaginative commerce that went into creating American literary culture in the nineteenth century.
The story Greenspan tells, however, is a story eminently complete in itself, and a major contribution to American cultural history.”—Bruce Michelson, American Studies

“Greenspan’s biography, the first extended examination of Putnam since the turn of the twentieth century, offers a definitive account of this publisher’s career.”—Eric Lupfer, Libraries and Culture

“I would like to say that Greenspan’s work is a model for modern scholarship in publishing history, but it presents an example that may be difficult to follow.
We can only hope that undiscovered manuscript troves will find their way to libraries, and, in the meantime, we can enjoy the product of Greenspan’s labors and make more well-informed surmises about other publishers based on his exemplary scholarship.”—Melissa J. Homestead, Resources for American Literary Study

Ezra Greenspan is Associate Professor of English at the University of South Carolina. His previously published books are The Schlemiel Comes to America (1981), Walt Whitman and the American Reader (1990), and Cambridge Companion to Walt Whitman (1995).