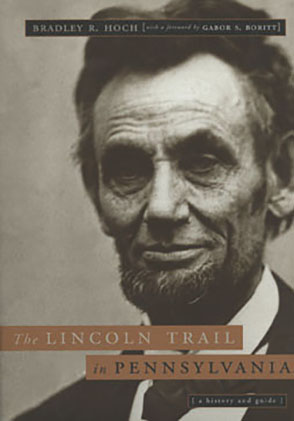 “What a ride for the Lincoln buff. . . . Philadelphia, Harrisburg, York, Hanover, Gettysburg, Pittsburgh, and Erie also figure in the 210-page book, which will appeal to those with an interest in Pennsylvania and Civil War history.”—Caroline Abels, Pittsburgh Post-Gazette

What is the Lincoln Trail in Pennsylvania? It is the story of Abraham Lincoln in the Keystone State—the chronicle of where he went, what he did, and what he said in the state. The trail begins with Lincoln's Pennsylvania ancestors, moves on to his travels, public appearances, and speeches, and concludes with his funeral train in 1865. The Lincoln Trail in Pennsylvania tells a story for the reader, but it is also a guide for those who would travel the state figuratively or literally, to recover the memory of America's sixteenth president.

The Lincoln Trail in Pennsylvania transports the reader back in time to key moments in Lincoln's public life. In 1846, at the age of thirty-seven, Lincoln was elected to the U.S. House of Representatives. Using mileage that Lincoln claimed for his trip, available routes, duration of the journey, and average speeds, Bradley Hoch is the first to establish the probable route Lincoln followed on his way from Illinois to Washington, D.C. Hoch concludes that he traveled by steamboat along the Ohio and Monongahela Rivers and by stagecoach on the National Road into Maryland.

After Lincoln was elected president in November 1860, he transformed his inaugural journey from Springfield to Washington into a grand railroad tour of northern cities, hoping to cement the people's loyalty to the Union and to himself. His inaugural train, the first of its kind, made several stops in Pennsylvania. Hoch follows Lincoln throughout his journey, including the dramatic last leg—the "secret night train"—when Allan Pinkerton and his agents, determined to protect Lincoln from would-be assassins, cut telegraph lines and sidetracked trains in order to spirit him safely from Harrisburg to Washington.

Hoch recovers symbolic moments, none more moving than Lincoln's funeral train as it stopped in several Pennsylvania cities, including York, Harrisburg, Lancaster, and Erie. In Philadelphia, the Liberty Bell was placed at the head of Lincoln's coffin when it lay in Independence Hall. As more than one hundred thousand mourners passed by, the bell's inscription memorialized his life: "Proclaim LIBERTY throughout all the Land unto all the inhabitants thereof."

Rarely seen photographs, engravings, and maps enrich this illuminating volume. In the final chapter, Hoch offers a guide of sites to visit in present-day Pennsylvania, making The Lincoln Trail in Pennsylvania a welcome book for a wide range of readers interested in American history.

“What a ride for the Lincoln buff. . . . Philadelphia, Harrisburg, York, Hanover, Gettysburg, Pittsburgh, and Erie also figure in the 210-page book, which will appeal to those with an interest in Pennsylvania and Civil War history.”—Caroline Abels, Pittsburgh Post-Gazette

“Hoch’s book features some rare photographs, engravings, and maps of Lincoln’s visits to Pennsylvania.
The Lincoln Trail in Pennsylvania chronicles where Lincoln went, what he did, and what he said in the state.”—Ann Diviney, Sun Style

Bradley R. Hoch is founding partner of Gettysburg Pediatrics. Lincoln and the Civil War are deeply ingrained in his family's past: two of his great grandfathers fought as volunteers in Pennsylvania regiments during the Civil War.