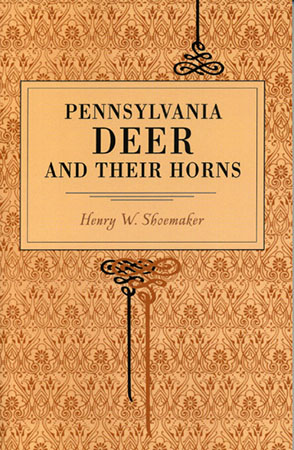 An Open Access edition of Pennsylvania Deer and Their Horns is available through PSU Press Unlocked. To access this free electronic edition click here. Print editions are also available.

Shoemaker writes that the book is meant to “establish a standard of comparison of old and new deer and their horns . . . by presenting descriptions and measurements of the best known heads of moose, elk and deer killed in the commonwealth, an added zest will be given to efforts of collectors and hunters.” In the chapters that follow, the author describes and compares fossil and extinct Pennsylvania deer, big deer, little deer, the gray moose or elk, and black moose. Descriptions of famous hunters, hunting methods, and traditions appear alongside hunting lore and tales of legendary stags and their famous pursuers.

The volume concludes with three chapters on deer, elk, and moose horns, with descriptions and measurements of antlers, along with stories of unusual and “freak” heads and sets of antlers. The text is heavily illustrated with photographs of famous hunters and their game, alongside many photographs of the deer and horns themselves.

Henry W. Shoemaker (1880–1958) was the author of more than twenty volumes of popular Pennsylvania literary folklore and numerous narrative volumes about Pennsylvania’s disappearing wildlife during the first half of the twentieth century. He also served as Pennsylvania’s first state folklorist from 1948 to 1956.