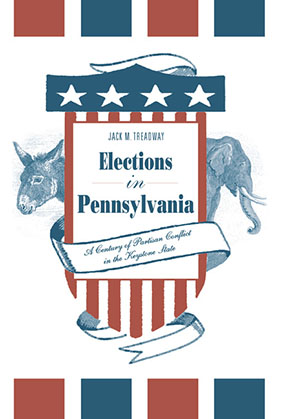 “Elections in Pennsylvania fills an important void in the literature on the political history of the state. In this single volume a reader can find a veritable treasure trove of statistical information on nearly every statewide elected office from 1900 to 2004. Treadway’s analysis of the data reveals important heretofore undiscovered trends in the behavior of Pennsylvania’s voters, and he offers thoughtful and incisive explanations of his findings. This is a significant work that deserves to be read by scholars, practitioners, and citizens of the Keystone State.”—Thomas J. Baldino, Wilkes University

The most comprehensive state election study ever undertaken, Elections in Pennsylvania provides data and analysis for more than 13,000 general elections and more than 6,000 primary elections held in the state between 1900 and 1998, with a postscript examining in less detail the elections of 2000 and 2002. Included are all elections for president, governor, U.S. senators and representatives, statewide offices, and members of the General Assembly. The extensive period of time covered allows the author to provide an important historical perspective on electoral trends, distinguishing what are genuinely new developments in electoral dynamics and voting behavior in recent decades from what are continuations of patterns earlier in the century.

“Elections in Pennsylvania fills an important void in the literature on the political history of the state. In this single volume a reader can find a veritable treasure trove of statistical information on nearly every statewide elected office from 1900 to 2004. Treadway’s analysis of the data reveals important heretofore undiscovered trends in the behavior of Pennsylvania’s voters, and he offers thoughtful and incisive explanations of his findings. This is a significant work that deserves to be read by scholars, practitioners, and citizens of the Keystone State.”—Thomas J. Baldino, Wilkes University

“There was—until now—no comprehensive history of Pennsylvania politics covering party development, party competition, election results, and voting attitudes in the twentieth century. Treadway remedies this deficiency with a well-researched, clearly written volume that will appeal to a general audience interested in Pennsylvania politics as well as to specialists who seek a one-stop place for data and information not conveniently found elsewhere. Not only does the author pull together material not readily available, but he also assesses it in a way that makes a significant contribution to Pennsylvania political history.”—G. Terry Madonna, Franklin and Marshall College

“The book, published by the Pennsylvania State University Press, is a gold mine for political buffs. Everything you ever wanted to know about every statewide election of the past 100 years is in the book, which contains dozens of tables, graphs and maps chronicling primary and general elections dating back to 1900. . . . The professor has produced the definitive history of Pennsylvania politics in the twentieth century.”—Tony Phyrillas, Mercury

“Hailed as the most comprehensive state election study ever undertaken, Elections in Pennsylvania provides data and analysis for more than 13,000 general elections and more than 6,000 primary elections in the state between 1900 and 1998, with a postscript examining in less detail the elections of 2000 and 2002.”Susquehanna Life

“This will be a useful reference for political scientists and scholars.”—Al Holliday, Pennsylvania Magazine

“Elections in Pennsylvania is a well-researched, clearly written, and highly informational monograph that represents a significant contribution to the historiography of politics in Pennsylvania.”—John M. McLarnon, Pennsylvania Magazine of History and Biography

Jack Treadway is Professor of Political Science at Kutztown University.

1. Pennsylvania Then and Now

2. A Century of Electors

The last four decades of the twentieth century produced a significant amount of academic research that has greatly enhanced our understanding of electoral dynamics and individual voting behavior. As has always been the case, the bulk of the research focused on national elections. Nevertheless, the sharp increase in research at the state level has added much to our knowledge about state elections, particularly state legislative elections.

Of particular importance to our understanding of legislative elections was the release in 1990 of computer files created by the Inter-University Consortium for Political and Social Research (ICPSR) at the University of Michigan. The initial files covered general elections in almost all states and primary elections in fourteen southern and border states for the election years 1968–86. The files have been updated every two years. A number of scholarly articles were published following the release of the files. Some of the authors supplemented the ICPSR data with data from earlier years (Jewell 1994).

Despite these recent efforts, much remains to be done. Many aspects of state legislative elections have received no or only cursory examination (Jewell 1994). While gubernatorial elections have been analyzed by a number of state government scholars, elections for other statewide offices have received little attention. A more significant deficiency, in my opinion, is the dearth of studies examining elections from a historical perspective. Dealing with that shortcoming is the primary goal of this book.

Most of the election studies chronicle the changes that have transpired since the early 1960s. While this research has greatly expanded our understanding of the electoral process, it begs an important question—namely, are the trends of the past four decades unique? If they are, then we have, indeed, witnessed some significant changes during the last forty years. But if they are not, then the current patterns may not be all that different from those of the past, in which case, the 1960s may not be the best baseline for at least some areas of electoral research.

The basic premise of this book is that contemporary electoral dynamics and trends must be put into historical perspective. One cannot assume that current trends are unprecedented. A historical analysis may reveal that particular electoral patterns, assumed to be a byproduct of the contemporary political environment, may, rather, be a continuation of a longer-term trend or a reversion to a standard that was prevalent decades ago.

This book will provide a historical perspective by examining the more than thirteen thousand general elections and more than six thousand primary elections for president, governor, U.S. senator and representative, statewide offices, and members of the Pennsylvania General Assembly that took place in Pennsylvania between 1900 and 1998. This approach will allow us to distinguish between longer-term trends and unique contemporary patterns. It is my conviction that to understand and appreciate fully contemporary electoral patterns and arrangements, one must understand what existed before. Trends do not exist in a historical vacuum—placing them in the proper historical context is crucial to assessing their ultimate significance.

The basic goal of this book is to develop a series of generalizations regarding electoral dynamics and voting based on a comprehensive set of elections over the course of a century. It is hoped that this detailed case study will offer some useful insights into the changing character of electoral competition and voting in Pennsylvania during the twentieth century. The most obvious limitation of this study is that the findings do not necessarily apply to other states. However, there is no reason to believe that elections in Pennsylvania are completely unlike those in the other forty-nine states and that nothing that is learned from this research is applicable outside its borders.

Chapter 1, “Pennsylvania Then and Now,” chronicles the economic, social, and political changes that took place in the state during the twentieth century and discusses the impact of the Republican statewide political machine during the first decades of the century.

Chapter 2, “A Century of Electors,” details trends in voter registration and turnout and discusses the incidence of independence among voters and the increasing incidence of split-ticket voting.

Chapter 3, “Legislative Elections,” examines in detail General Assembly and congressional elections. Among the topics included are the percentage of incumbents running for reelection, the reelection rates of incumbents, the incidence of marginal districts, the percentage of contested elections, electoral marginality and the incidence of defeat, and the relationship between vote share and seats won.

Chapter 4, “Legislative Careerism,” focuses on changes in the level of professionalism among Pennsylvania state legislators and members of the state’s delegation to the U.S. House of Representatives and summarizes the political backgrounds of members of the General Assembly who were serving in 1901 and 1995.

Chapter 6, “ Primary Elections,” examines competition and voter turnout in primary elections for governor, U.S. senator, congressional representative, and the state legislator. The chapter examines the potential influence of incumbency, prospects for general election success, urban-rural differences, and majority-minority party status on the level of primary competition and analyzes trends in primary election voter turnout and the difference between primary and general election turnout.

Chapter 7, “Patterns of Partisanship,” treats a variety of electoral patterns. It attempts to determine when the New Deal realignment occurred in Pennsylvania; examines the changing relationship between urbanism, racial and ethnic diversity, and the Republican vote; categorizes all sixty-seven counties according to their level of competition in gubernatorial and presidential elections during the twentieth century; profiles contemporary Republican and Democratic state legislative districts; and finally, presents a summary of the home counties of all those individuals who served as governors, U.S. senators, and statewide officeholders.

Chapter 8, “In Perspective,” summarizes a century of partisan conflict and reviews the findings contained in the previous chapters. It shows that some recent trends, hailed as significant departures from the past, are less significant than is contended. Some of these patterns are simply the past revisited.

Chapter 9, “Postscript,” updates the twentieth-century trends through the 2000 and 2002 elections.

It is hoped that this study of twentieth-century Pennsylvania elections can further our understanding of state elections in general. If this approach proves useful, perhaps others will conduct similar studies in other states. Additional comparative data will allow us to better understand which patterns are common to a variety of states as well as which are unique to particular states. I remain convinced that more historical data can only increase our understanding of contemporary elections in the American states.

The Realignment of Pennsylvania Politics Since 1960

Two-Party Competition in a Battleground State