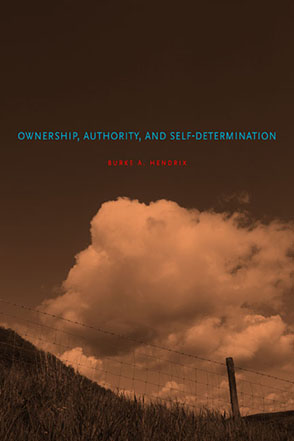 Much controversy has existed over the claims of Native Americans and other indigenous peoples that they have a right—based on original occupancy of land, historical transfers of sovereignty, and principles of self-determination—to a political status separate from the states in which they now find themselves embedded. How valid are these claims on moral grounds?

Burke Hendrix tackles these thorny questions in this book. Rather than focusing on the legal and constitutional status of indigenous nations within the states now ruling them, he starts at a more basic level, interrogating fundamental justifications for political authority itself. He shows that historical claims of land ownership and prior sovereignty cannot provide a sufficient basis for challenging the authority of existing states, but that our natural moral duties to aid other persons in danger can justify rights to political separation from states that fail to protect their citizens as they should.

Actual attempts at political separation must be carefully managed through well-defined procedural mechanisms, however, to foster extensive democratic deliberation about the nature of the political changes at stake. Using such procedures, Hendrix argues, indigenous peoples should be able to withdraw politically from the states currently ruling them, even to the point of choosing full independence.

Burke A. Hendrix is Assistant Professor of Government at Cornell University, where he also has a joint appointment in the Program on Ethics and Public Life.

3. The Limits of Ownership

Conquest gives a title that the courts of the conqueror cannot deny, whatever the private or speculative opinions of individuals may be, respecting the original justice of the claim which has been successfully asserted. The British government, which was then our government, and whose rights have passed to the United States, asserted a title to all lands occupied by Indians. . . . These claims have been maintained as far west as the river Mississippi, by the sword.

Most of us are familiar with the methods by which the United States acquired its current territory from American Indian nations, and the ways in which it forced these nations to submit to its political authority even on the lands they were allowed to retain. Do these historical processes call into question the authority of the United States in the present day? If not, why not? Most other states have similar histories of fraud and violence, even if the details vary—are their claims to authority also called into question?

What justifies the authority of states over particular populations and territories, and what should happen when this authority is challenged in the present day? These are the central questions of this book.