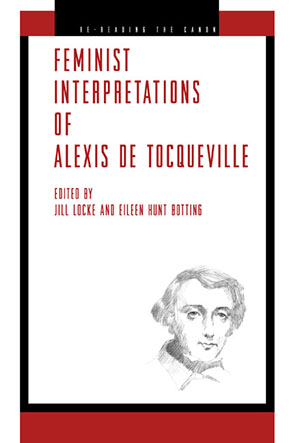 The volume highlights the expressly normative nature of Tocqueville’s project, thus providing an overdue counterweight to the conventional understanding of Tocquevillean America as an actual place in time and history. By reading Tocqueville alongside the writings of early women’s rights activists, ethnologists, critical race theorists, contemporary feminists, neoconservatives, and his French contemporaries, among others, this book produces a variety of Tocquevilles that unsettles the hegemonic view of his work.

Seen as a philosophical source and a political authority for modern democracies since the publication of the twin volumes of Democracy in America (1835/1840), Tocqueville emerges from this collection as a vital interlocutor for democratic theorists confronting the power relations generated by intersections of gender, sexual, racial, class, ethnic, national, and colonial identities.

Jill Locke is Associate Professor of Political Science and Chair of the Department at Gustavus Adolphus College.

Eileen Hunt Botting is Rolfs Associate Professor of Political Science and Director of the Gender Studies Program at the University of Notre Dame.

Introduction: To Tocqueville and Beyond

1. Beyond the Bon Ménage: Tocqueville and the Paradox of Liberal Citoyennes

3. Tocqueville and the Feminization of the Bourgeoisie

6. Sympathy, Equality, and Consent: Tocqueville and Harriet Martineau on Women and Democracy in America

7. Tocqueville’s American Woman and “The True Conception of Democratic Progress.”

8. Toward a Generative Theory of Equality

12. Tocqueville’s Authority: Feminism and Reform “Between Government and Civil Society”

This new series, Re-Reading the Canon, is designed to foster this process of reevaluation. Each volume will offer feminist analyses of the theories of a selected philosopher. Since feminist philosophy is not monolithic in method or content, the essays are also selected to illustrate the variety of perspectives within feminist criticism and highlight some of the controversies within feminist scholarship.

In this series, feminist lenses will be focused on the canonical texts of Western philosophy, both those authors who have been part of the traditional canon, and those philosophers whose writings have more recently gained attention within the philosophical community. A glance at the list of volumes in the series will reveal an immediate gender bias of the canon: Arendt, Aristotle, Beauvoir, Derrida, Descartes, Foucault, Hegel, Hume, Kant, Locke, Marx, Mill, Nietzsche, Plato, Rousseau, Wittgenstein, Wollstonecraft. There are all too few women included, and those few who do appear have been added only recently. In creating this series, it is not my intention to rectify the current canon of philosophical thought. What is and is not included within the canon during a particular historical period is a result of many factors. Although no canonization of texts will include all philosophers, no canonization of texts that excludes all but a few women can offer an accurate representation of the history of the discipline, as women have been philosophers since the ancient period.