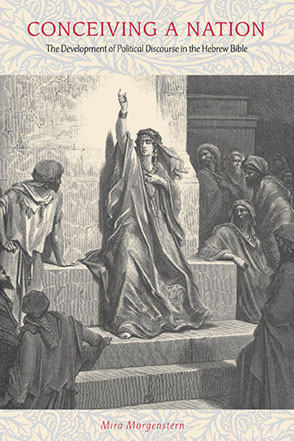 “Mira Morgenstern is a deep reader of biblical texts, and her readings give us a new and provocatively modern understanding of Israelite nationhood—constructed, as it were, from the margins, by dreamers, strangers, and women, among others. This is an illuminating and exciting book.”—Michael Walzer, Institute for Advanced Study

Current conflicts in both national and international arenas have undermined the natural, organic concept of nationhood as conventionally espoused in the nineteenth century. Conceiving a Nation argues that the modern understanding of the nation as a contested concept—as the product of a fluid and ongoing process of negotiation open to a range of livable solutions—is actually rooted in the Bible.

This book draws attention to the contribution that the Bible makes to political discourse about the nation. The Bible is particularly well suited to this open-ended discourse because of its own nature as a text whose ambiguity and laconic quality render it constantly open to new interpretations and applicable to changing circumstances. The Bible offers a pluralistic understanding of different models of political development for different nations, and it depicts altering concepts of national identity over time.

In this book, Morgenstern reads the Bible as the source of a dynamic critique of the ideas that are conventionally considered to be fundamental to national identity, treating in successive chapters the ethnic (Ruth), the cultural (Samson), the political (Jotham), and the territorial (Esther). Throughout, she explores a number of common themes, such as the relationship of women to political authority and the “strangeness” of Israelite political existence. In the Conclusion, she elucidates how biblical analysis can aid in recognition of modern claims to nationhood.

“Mira Morgenstern is a deep reader of biblical texts, and her readings give us a new and provocatively modern understanding of Israelite nationhood—constructed, as it were, from the margins, by dreamers, strangers, and women, among others. This is an illuminating and exciting book.”—Michael Walzer, Institute for Advanced Study

“Political theorists and biblical scholars have shown an increased interest recently in the political character of the Hebrew Bible. Mira Morgenstern’s Conceiving a Nation is a noteworthy addition to the burgeoning academic literature on the subject. Morgenstern focuses on six examples—Joseph, Moses, three figures from the period of the judges (Ruth, Jotham, and Samson), and Esther. She uses these examples to argue that the political discourse of the Hebrew Bible is characterized by the persistent theme of strangeness/difference, which not only distinguishes the biblical text from more traditional works for political theory, but also makes it especially relevant to our own time. Morgenstern’s book is influenced by and, in turn, will influence discussion in the fields of political theory and biblical studies as well as feminist and literary studies.”—Gary Remer, Tulane University

“[This] book is a significant contribution to the political theory of ancient Israel. . . . Using a literary approach for reading biblical narratives, Morgenstern masterfully presents many political implications in the Hebrew scriptures with interpretations that are original and insightful.”—A. J. Waskey, Choice

Mira Morgenstern is Associate Professor of Political Science at The City College, City University of New York. She is the author of Rousseau and the Politics of Ambiguity: Self, Culture, and Society (Penn State, 1996).

1 Joseph: The Politics of Dreaming

2 Moses: The Politics of Alienation

3 Ruth: The Politics of Difference

4 Jotham: The Politics of Parable

5 Samson: The Politics of Riddling

6 Esther: The Politics of Metaphor