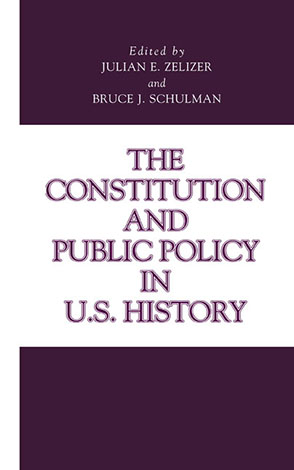 Julian E. Zelizer is Professor of History and Public Affairs at Princeton University.

Bruce J. Schulman is Professor of History at Boston University.

Idea or Practice: A Brief Historiography of Judicial Review

From Blood to Profit: Making Money in the Practice and Imagery of Early America

Necessities of State: Police, Sovereignty, and the Constitution

Constitutional Revision and the City: The Enforcement Acts and Urban America, 1870–1894

“The Least Vaccinated of Any Civilized Country”: Personal Liberty and Public Heath in the Progressive Era

Woodrow Wilson and a World Governed by Evolving Law

The South Confronts the Court: The Southern Manifesto of 1956

State Constitutionalism and the Death Penalty

The Equal Rights Amendment Reconsidered: Politics, Policy, and Social Mobilization in a Democracy

Jefferson, who was unable to attend the Philadelphia Convention, shared the belief with those drafters of the Constitution that a written constitution was fundamental to the prevention of tyranny and the preservation of rights and liberty of a free people. As such, the Constitution sought to establish a federal government with the necessary power to realize the nation’s shared purpose, while so structured in careful balance in its branches and distribution of federal and state powers that it would prevent oppression. The Constitution established the primary rules for the conduct of impartial government against the demands of political faction, popular passion, and personal ambition.

From the eighteenth century through the mid-twentieth century, constitutional interpretation primarily revolved around the doctrine of limited government. The most fundamental and vexing constitutional issue confronting Americans in the early nineteenth century was the relationship and the definition of powers between the federal government and the states. The issue of slavery embodied this question in its most heated form and would only be resolved in a tragic civil war.

The Civil War did not fully resolve, however, fundamental constitutional questions concerning the federal government’s power to tax, the regulation of commerce, the definition of marriage and religious freedom, safeguards for female and child laborers, and the protection of entrepreneurial liberty and property. At the same time, a sign of a more broadly construed legal environment for government was evident in domestic regulatory law and federal voting rights legislation. The rise of progressive reform in the late nineteenth century encouraged political sentiment for a more activist federal government operating within a less restrained legal environment.

By the mid-twentieth century, constitutional questions became central to American politics as the courts addressed a range of issues, including racial segregation, presidential powers, abortion, prayer in public schools, and voting rights. Within a highly politicized environment and the seeming breakup of a cultural consensus, the courts became the focus of political debate, addressing fundamental questions about the role of the courts and judges within an American democracy raised by activists, public officials, and scholars.

The eighteenth-century political philosopher Lord Bolingbroke defined the English constitution as “that assemblage of laws, institutions, and customs, derived from certain fixed principles of reason, directed to certain fixed objects of public good” within a system by which the community has agreed to be governed. Bolingbroke’s definition assumes that fixed principles of reason and fixed objects of public good can be agreed upon within a polity. What happens, however, when these basic standards of reasoning are called into question by scholars? And what is the result when the ultimate goals of government cannot be agreed upon by a citizenry?

The essays in this volume show that legal and constitutional debate over matters of policy has a long history in America. These essays reveal that such debate is perennial to a democracy, and while political conflicts over the meaning of the Constitution and specific policies are not easily resolved, even more difficult are the lessons of learning how to balance order and freedom, individual rights and community responsibilities, and liberty and democracy in this fragile entity we call the American republic.