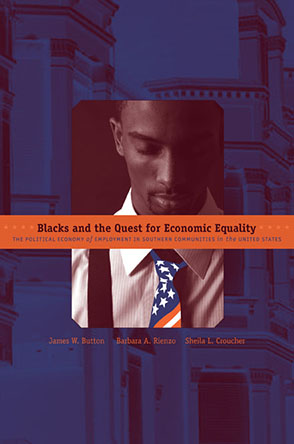 “This is an exceptional work of scholarship that presents a comprehensive and compelling study of racial inequality in employment that also provides prescriptions for change. It’s both highly readable and meets rigorous academic standards. It’s not to be missed by anyone with a genuine interest in race and employment inequality.”—T. Wayne Parent, Louisiana State University

The civil rights movement of the 1960s improved the political and legal status of African Americans, but the quest for equality in employment and economic well-being has lagged behind. Blacks are more than twice as likely as whites to be employed in lower-paying service jobs or to be unemployed, are three times as likely to live in poverty, and have a median household income barely half of that for white households. What accounts for these disparities, and what possibilities are there for overcoming obstacles to black economic progress? This book seeks answers to these questions through a combined quantitative and qualitative study of six municipalities in Florida.

Factors impeding the quest for equality include employer discrimination, inadequate education, increasing competition for jobs from white females and Latinos, and a lack of transportation, job training, affordable childcare, and other sources of support, which makes it difficult for blacks to compete effectively. Among factors aiding in the quest is the impact of black political power in enhancing opportunities for African Americans in municipal employment.

The authors conclude by proposing a variety of ameliorative measures: strict enforcement of antidiscrimination laws; public policies to provide disadvantaged people with a good education, adequate shelter and food, and decent jobs; and self-help efforts by blacks to counter self-destructive attitudes and activities.

“This is an exceptional work of scholarship that presents a comprehensive and compelling study of racial inequality in employment that also provides prescriptions for change. It’s both highly readable and meets rigorous academic standards. It’s not to be missed by anyone with a genuine interest in race and employment inequality.”—T. Wayne Parent, Louisiana State University

“This is a bittersweet book—it is among the best of Jim Button’s works on southern communities, and, alas, he is no longer with us. Button, Rienzo, and Croucher examine black economic opportunities in six Florida communities that represent the Old and New South. Using a variety of methodological approaches, the authors give us a detailed and nuanced view of the ability of black communities within these cities to gain an economic foothold. This is an excellent piece of scholarship and makes a major contribution to our understanding of the South and black progress.”—Paula D. McClain, Duke University

The late James W. Button was Professor of Political Science at the University of Florida.

Barbara A. Rienzo is Professor of Health Education and Behavior at the University of Florida.

2. The Economic, Racial, and Political Contexts of the Cities

4. African Americans in the Municipal Workforces

Thirty years ago, I began the exploration of race, politics, and change in six southern (Florida) communities. In Blacks and Social Change: Impact of the Civil Rights Movement in Southern Communities (Princeton University Press, 1989), I detailed transformations that resulted following the 1960s political mobilization of blacks, including the election of African Americans to public office, improvements in municipal services, and the desegregation of schools and public accommodations. Now, in the latest investigation of these six cities, Barbara Rienzo and I look at the issue of most importance to African Americans more recently—the betterment of economic (primarily employment) conditions.

In my first book, I surmised that greater black political participation helped African Americans in the South by removing legal barriers, providing greater status, and enhancing basic public services such as street paving, recreation, and police protection. I also suggested, however, that the larger and more complex battle would be the quest by blacks for economic equality with whites. In the words of Martin Luther King Jr., “Jobs are harder and costlier to create than voting rolls” (King 1976, 6). Thus, the focus of this work is to explore the employment situation of blacks in the new millennium and the factors that have influenced how blacks are faring economically.

This study is unique in several respects. First, it blends both quantitative and qualitative data that triangulate our findings. The more than four hundred personal interviews (we completed the vast majority!) provide a rare entr&eacute;e into blacks’ and whites’ perspectives as they deal with the issue of race and employment within southern communities. Second, we closely look at the policies and problems not often investigated in context yet related to jobs and African Americans, including the salient issues of affirmative action, interminority competition, inequities in public education, and cultural diversity programs.

Third, this study focuses on typical communities in the South. While this region encompasses more than half the African American population, race and economics in the South are sorely neglected by both scholars and policymakers. Finally, unlike most academic tomes on race-related issues, this study conclude with a discussion of prescriptions for change that, based on our findings, have the best chance of improving the economic status of African Americans through employment opportunities.

This study could not have been completed without the funding bestowed by The Russell Sage Foundation. For this, we are most grateful. We would also like to acknowledge the work of two graduate research assistants who assisted with a portion of the fieldwork for this study: Shannon Tynes Michael and Phil Gold.