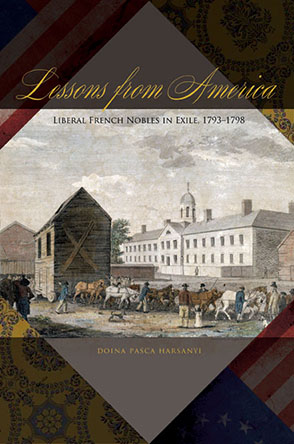 “Lessons from America contributes a fresh dimension to the classic story of how the French Revolution became the touchstone of political life in the early American republic. To this well-known theme, it brings the European individuals who actually played a key role in the debate through their keen intellects, high social status, and personal connections with leading American political figures. Although based on meticulous research, this is no narrow monograph seeking to ram home a very fine point. Rather, it is a richly textured account that reads as fluently as a novel without sacrificing intellectual rigor and historiographical engagement.”—Rafe Blaufarb, Florida State University

Every war has refugees; every revolution has exiles. Most of the refugees of the French Revolution mourned the demise of the monarchy. Lessons from America examines an unusual group who did not. Doina Pasca Harsanyi looks at the American experience of a group of French liberal aristocrats, early participants in the French Revolution, who took shelter in Philadelphia during the Reign of Terror. The book traces their path from enlightened salons to revolutionary activism to subsequent exile in America and, finally, back to government posts in France—illuminating the ways in which the French experiment in democracy was informed by the American experience.

“Lessons from America contributes a fresh dimension to the classic story of how the French Revolution became the touchstone of political life in the early American republic. To this well-known theme, it brings the European individuals who actually played a key role in the debate through their keen intellects, high social status, and personal connections with leading American political figures. Although based on meticulous research, this is no narrow monograph seeking to ram home a very fine point. Rather, it is a richly textured account that reads as fluently as a novel without sacrificing intellectual rigor and historiographical engagement.”—Rafe Blaufarb, Florida State University

“This is a first-rate study of the transmission and transformation of ideas and experiences across the Atlantic. Working from the experience of a group of refugee French liberal nobles in America, Harsanyi addresses the development of French political culture during and after the Revolution with insight and intelligence. Lessons from America sheds new light on the formation of French liberalism. It will be important reading for scholars in many fields.”—Alan Kahan, Florida International University, Emeritus

“This study offers insights into the world that confronted a small group of Frenchmen as it was reflected in their biographies and correspondence. . . . Doina Pasca Harsanyi has . . . produced a book that makes a delightful read and a solid contribution to the emigration experience during the French Revolution.”—Kristy Carpenter, H-France Book Reviews

“By providing the fullest, smartest, and most judicious account of French liberal nobles in the United States, Harsanyi has written a book that will be of keen interest to scholars of the French Revolution, the early American republic, the Atlantic world, and the development of modern political ideologies.”—Matthew Rainbow Hale, Pennsylvania Magazine of History and Biography

“Elegantly written and amply documented in thirty pages of footnotes. . . [Lessons from America] is a helpful contribution to the history of liberal ideas.”—William Doyle, Journal of Modern History

1. Aristocrats and Liberal Nobles on the Eve of the Revolution

3. What to Expect When Landing in America

4. The American Home Away from Home

5. Politics, Business, and the Future of France

6. American Influences Under the Directory

On March 8, 1794, Médéric-Louis-Élie Moreau de Saint-Méry, a respected writer and former member of the National Constituent Assembly, arrived in the United States, quite shaken by the perilous four-month passage and even more by the events that prompted his departure. On September 7, 1792, one year after the disbanding of the National Constituent Assembly, he witnessed the fatal stoning of the duc de La Rochefoucauld at Gisors; for more than a year afterwards he crisscrossed the country, trying to stay ahead of an arrest warrant, during which time he also learned of the execution of his close friend, the scientist and former mayor of Paris Jean-Sylvain Bailly. Although these particular manifestations of the will of the people frightened him into boarding a ship to America as soon as he could reach Le Havre, Moreau could boast a very respectable revolutionary career.

A wealthy resident of Martinique, Moreau spent long years in Paris, studying the law and writing a richly documented six-volume work on the French Indies, Loiz et constitutions des colonies françaises de l’Amérique sous le vent, published between 1784 and 1790. The book earned him a reputation as a man of letters and the prestigious position of secretary of the Musée de Paris in 1787. In 1789 he was elected representative of the Saint-Eustache district at the Paris Commune. Subsequently elected president of the Commune on July 1, 1789, he found himself right in the middle of revolutionary events. On July 14 he received the key to the Bastille from the very hands of the insurgents and enjoyed a moment of fame as he harangued Louis XVI “to make his authority last by using no other weapons but the love of his people: this weapon will suffice and will render useless all others.” Such memories doubtless comforted him in his exile in America, where he made a living first as a shipping clerk in New York—a low position that injured both his pride and his back—and then as a printer and a book-seller in Philadelphia. Moreau’s bookstore at the corner of Front and Walnut streets carried everything from books and newspapers to stationery and clothing. Most important, it functioned as a meeting place for a select group of French émigrés, most of them his former colleagues at the National Constituent Assembly. Moreau’s own words give us an idea of the coterie over which he presided: “Nothing could exactly describe the nature of my relationship with Talleyrand. . . . Every day, during the time we were together in Philadelphia, from the month of October 1795 until this day, he came to my office at eight o’clock in the evening. There, alone and without interruptions (except when Beaumetz, Talon, Blacons, Noailles, Volney, Payen de Bois, Démeunier, Boislandry also came) we opened our hearts to one another and our innermost thoughts became known to each other.”

Moreau’s store comes across as the re-creation of an enlightened French salon bravely weathering uncontrollable events, a small piece of the Republic of Letters in exile. As in actual salons, membership was restricted to nobles and outstanding educated commoners. French émigrés of more modest backgrounds or refugees from the civil wars in Saint-Domingue were not invited. Nor were émigrés of dissimilar political allegiances, such as the royalist chevalier de Moré or the notorious former courtier chevalier de Tilly. Obviously, various representatives of the French Republic were carefully avoided as well.

It was a tightly knit group where shared experiences and beliefs formed a powerful bond. All the individuals named by Moreau belonged to the upper crust of the Old Regime and their names would have had a familiar ring in Parisian salons and academies. At the Estates General of May 1789, La Rochefoucauld-Liancourt, Beaumetz, Blacons, and Noailles represented the nobility, Talleyrand the high clergy. Elected by the third estate, Moreau and Démeunier were successful men of letters, quite used to hobnobbing with the nobility. The political experiences of the entire group were intimately linked with the early Patriot consensus against absolutism and the subsequent realignments at the Constituent Assembly. All of them began their revolutionary careers as radicals on the Patriot side; all left the Constituent Assembly on positions they believed responsibly moderate but which, in revolutionary parlance, looked suspiciously aristocratic (when not plainly counterrevolutionary) to the uncompromising Jacobins who ultimately obtained the upper hand. Toward the close of the Assembly, all of Moreau’s future guests joined the club of the Feuillants, founded in February 1791 as the party of moderation and order. After the fall of the monarchy in August 1792, moderation smacked more than ever of treason. Moreau, Noailles, La Rochefoucauld-Liancourt, and all the others became hunted men, the objects of arrest warrants. Caught between emigration and execution, they naturally chose emigration. This book is their story, seen from three perspectives: the Atlantic connections during the revolutionary era, the evolution of aristocratic identity, and the development of French political liberalism.

Letters Written from the Banks of the Ohio

Claude-François de Lezay-Marnésia, Edited with an introduction by Benjamin Hoffmann, and Translated by Alan J. Singerman

Friendship and Politics in Post-Revolutionary France