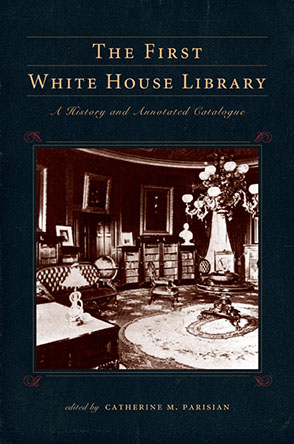 “Do not be misled by the modest title of this book or by the fact that one of our least-known presidents was behind the first White House library. This book brings together wonderful essays, starting with that by historian Sean Wilentz, and going on to others on the role of Mrs. Fillmore, the library room, the process of forming the library, and, of course, the library’s contents. The catalogue proper of this library that represented the ‘collective mind of the age’ contains mini-essays explaining how each book fit in. This is library history at its best; in other words, it’s cultural history. This splendid contribution to American history deserves to be widely available.”—Kenneth E. Carpenter, former Assistant Director for Research Resources in the Harvard University Library and the Harvard College Library

Although many early U.S. presidents were avid readers and book collectors—George Washington, John Adams, and Thomas Jefferson, to name a few—they usually brought their own books to the White House and removed them at the end of their terms. It was not until 1850 that Millard and Abigail Fillmore established the first official White House collection. This catalogue of the library that they assembled not only reveals much about their own preoccupations and interests and those of the age they lived in, but also provides insight into American library history, reading history, and book trade and distribution networks.

Aside from the editor, the contributors are William Allman, Elizabeth Thacker-Estrada, and Sean Wilentz. For more information about the National First Ladies Libraries visit http://www.firstladies.org.

“Do not be misled by the modest title of this book or by the fact that one of our least-known presidents was behind the first White House library. This book brings together wonderful essays, starting with that by historian Sean Wilentz, and going on to others on the role of Mrs. Fillmore, the library room, the process of forming the library, and, of course, the library’s contents. The catalogue proper of this library that represented the ‘collective mind of the age’ contains mini-essays explaining how each book fit in. This is library history at its best; in other words, it’s cultural history. This splendid contribution to American history deserves to be widely available.”—Kenneth E. Carpenter, former Assistant Director for Research Resources in the Harvard University Library and the Harvard College Library

“When Abigail Fillmore moved into the White House with her husband and daughter, they made an innovation. A family of book lovers, they created a national collection for an in-home library that they left to the nation. Catherine Parisian’s exhaustive and meticulous archival work reconstructs the collection and how it was housed. While Fillmore’s rise to the presidency has been described as exemplifying the American dream, Parisian reveals the foundation of the dream to be education and family life. The Fillmores—especially Abigail—applied these values to the president’s house in the full knowledge that it is the peoples’ house. The scholarly lens of the history of the book is used to illuminate the Fillmores’ home life in Washington and, by extension, a model of middle-class domesticity for the nation.”—Caroline F. Sloat, Director of Book Publication, American Antiquarian Society

“This book's greatest strength is the information it provides about the individual titles Fillmore collected for the first White House Library. For those interested in the history of either the White House or Millard Fillmore, the catalogue's numerous insights into the selection process and detailed discussion of which editions were most likely included in the collection will also be useful.”—Carli Spina, RBM: A Journal of Rare Books, Manuscripts, and Cultural Heritage

Catherine M. Parisian is Assistant Professor of English at the University of North Carolina at Pembroke.

Millard Fillmore and His Library

The White House Collection: The Mind of the Common Man

Creating a Room for the Collection

Millard Fillmore and His Booksellers

Appendix A: A List of the Books Purchased for the First White House Library in 1850

Appendix B: A Subject Index of Books in the First White House Library Catalogue

In March 2004 I convened a meeting of librarians and bibliographers to consider the feasibility of reconstructing the first permanent White House Library, established in 1850 by President Millard Fillmore and First Lady Abigail Fillmore. What little had been written about that library gave me reason to think that Abigail Fillmore played an important part in designing it and making it a cultural center of the White House during her husband’s brief term of office.

It has been my goal to document the historical role and cultural contributions of first ladies ever since I founded the National First Ladies’ Library in Canton, Ohio, in 1996. Over the years this organization has restored and renovated a majestic seven-story 1895 bank building, which is the home of the National First Ladies’ Library Education and Research Center. This building houses an extensive research library with works about and related to first ladies, museum exhibit rooms, a seminar room, archival storage and processing rooms, and a small Victorian theater open for public presentations. It also has a small library room dedicated to First Lady Abigail Fillmore, in which the books representing those in the first White House Library will be housed. In addition to its scholarly resources on site, the center maintains a Web site with the only available complete bibliography of all publications about first ladies, a biographical entry for each first lady written by renowned historian Carl Sferrazza Anthony, and a wealth of other information about America’s first ladies.

But it is one thing to have virtual information about Abigail Fillmore and quite another to show the actual books demonstrating her intellectual influence in the White House and her important role in forming the reading habits of her husband. If it would be possible to determine the contents of the first White House Library, I hoped to acquire equivalent copies of books for display in the Abigail Fillmore library, where scholars and visitors could see for themselves what books the Fillmores believed were most important for instruction and guidance at a critical juncture in the history of this nation, as well as what books of enduring literary value the Fillmores thought would be used and appreciated by future residents of the White House.

These were the aspirations I had in mind when I discussed this project in the course of the meeting in 2004. At the very beginning of this project, and every step of the way, Jon Lindseth advised me on the bibliographical challenges we would face in identifying these books, which had been dispersed in mysterious circumstances. As far as we could tell, just a few volumes remained in the White House, although some vouchers had come to light that contained a cursory account of the Fillmores’ earliest acquisitions. The antiquarian bookseller Jay Dillon delivered a report that encouraged us to think that some books could be identified on the basis of the vouchers.

Also present at the meeting were representatives of the Library of Congress and the Bibliographical Society of America (BSA). They agreed that it would be possible to reconstruct the library and proposed to compile a catalogue with notes and commentary describing the books and explaining their significance in relation to the literary tastes and intellectual outlook of the period. The Librarian of Congress, James H. Billington, offered to provide working space in the Rare Book and Special Collections Division for a project bibliographer, who would be recruited and supervised by BSA. At that time the president of BSA was John Bidwell, and the chair of the Publications Committee was Hope Mayo: they too have been involved in this project every step of the way and have helped to see this catalogue through the press long after they concluded their official responsibilities in the society. They could rely on previous experience at BSA, which organized and supervised the production of the monumental nine-volume Bibliography of American Literature, funded by the Lilly Endowment and the National Endowment for the Humanities. Although much smaller in scope, this project required similarly substantial funding, for which I am very grateful to the Institute of Museum and Library Services.

John Bidwell and Hope Mayo invited several individuals active in library and cultural affairs to join them in forming an editorial board: William P. Blair, Mark Dimunation, Jon Lindseth, and Elizabeth Thacker-Estrada. The editorial board proceeded to recruit a project bibliographer, Catherine M. Parisian, who had just received her doctorate at the University of Virginia and, without taking a second breath, immediately went to work in the Library of Congress. She made a number of important discoveries while compiling the catalogue, such as several books in the Library of Congress stacks that still retain traces of having been in the Executive Mansion in 1850 as well as inventories in the Library of Congress archives that have enabled her to identify the exact editions of many books only briefly mentioned in the vouchers. Her prefatory essay on the history of the library reveals what became of it in later administrations and how it served as precedent for the current White House Library, now more of a public institution than a personal collection.

Three other prefatory essays help to put the catalogue in context. Sean Wilentz, the Sidney and Ruth Lapidus Professor in the American Revolutionary Era at Princeton University, has written on the social and political forces underlying the Fillmores’ choice of reading matter. Elizabeth Thacker-Estrada, branch manager of the Excelsior Branch of the San Francisco Public Library, has drawn on her research for her forthcoming biography of Abigail Fillmore to recount how the first lady designed the library to be a place for social occasions, cultural events, and leisure activities at the Executive Mansion. William G. Allman, Curator of the White House, has described the decorative scheme and the furnishings the Fillmores selected for the library room. These contributors deserve a special word of thanks.

This catalogue is a co-publication of the Bibliographical Society of America, the National First Ladies’ Library, and the Penn State University Press. Patrick Alexander, Associate Director and Editor-in-Chief of the press, and his colleagues are to be commended for their editorial expertise and for the handsome design of this volume. I hope that it will inspire people to appreciate the importance of the first White House Library and to learn more about it by viewing the reconstructed version in the Abigail Fillmore Library Room at the National First Ladies’ Library’s Education and Research Center. Patricia Krider, Executive Director of the National First Ladies’ Library, has already started to work with designers to equip the room with bookcases, a fire suppression system, lighting, and humidity control that will meet the highest museum and archival standards.

Finally, I should acknowledge the support of my husband Ralph Regula who believes, like I do, that libraries hold a paramount position in the intellectual life of this nation. In 2005 he received the Public Service Award from the Friends of Libraries USA in recognition of his success in implementing government programs to sustain and improve library services. Some libraries grow and prosper; others fade away. After a promising beginning, the first White House Library was neglected and would have been forgotten if not for the collaborative effort that went into this catalogue, which has in its own way grown and prospered to become a valuable record of the ideals, beliefs, concerns, and goals of our nation’s leaders at the midpoint of the nineteenth century.