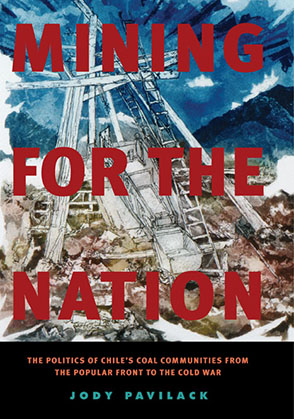 The dramatic story of Chile’s coal miners in the mid-twentieth century has never before been told. In Mining for the Nation, Jody Pavilack shows how this significant working-class sector became a stronghold of support for the Communist Party as it embraced cross-class alliances aimed at defeating fascism, promoting national development, and deepening Chilean democracy. During the tumultuous 1930s and 1940s, the coal miners emerged as a powerful social and political base that came to be seen as a threat to existing hierarchies and interests. Pavilack carries the story through the end of World War II, when a centrist president elected with crucial Communist backing brutally repressed the coal miners and their families in what has become known as the Great Betrayal, ushering Cold War politics into Chile with force. The patriotic fervor and tragic outcome of the coal miners’ participation in Popular Front coalition politics left an important legacy for those who would continue the battle for greater social justice in Chile in the coming decades.

“In Mining for the Nation, Jody Pavilack tells a complex story with commendable clarity. The book is well conceptualized, lucidly analyzed, and persuasively argued, with the support of extensive research in diverse local, national, and international primary and secondary sources, both public and private. Pavilack makes good use of recent literature on citizenship, on states of exception in Chile, and on the Cold War in Latin America. This is a book that every scholar of Chile and Latin American labor and the Left will want to have.”—Peter Winn, Tufts University

“[Jody Pavilack] does an excellent job of summarizing Chilean politics from the 1920s through the 1940s.”—Michael Monteón, The Americas

Jody Pavilack is Associate Professor of History at the University of Montana.

Preface: Beginning at the End

Part I Hopes and Promises

1. From Soldiers of Revolution to Citizen Workers

2. Challenging Exclusion: The Birth of the Popular Front in the Coal Region

3. From Tremors to Quakes: The Popular Front Wins the Presidency in 1938

4. Workers Contend with the Companies and the Popular Front Government, 1940–1942

5. “With a Bullet in His Heart and the Chilean Flag in His Hand”: Police Shootings in Lota, October 1942

6. “Soldiers of Democracy”: Collaboration and Conflict During World War II

7. General Strikes and States of Siege: Polarization in the Postwar Transition

9. The Great Betrayal: González Videla and the Coal Miners’ Strike of October 1947

Conclusion: Coalition Politics in the History of Chilean Democracy

Mining for the Nation tells the history of a group of people who continue to inspire with their resilience and, at times, resistance. These are the coal miners of southern Chile, descendants of Mapuche and mestizo campesinos who migrated to emergent mining settlements in the latter half of the nineteenth century. They were legendary within Chile for their political role as a Communist base of support—indeed, their region became known as a “Red zone.” They were also renowned among Latin American workers for their social solidarity and combative grassroots actions. With their proximity to Concepción, the birthplace of the Revolutionary Left Movement (Movimiento de Izquierda Revolucionaria; MIR), it is not surprising that the people of the coal communities actively mobilized during the radical years of the 1960s and 1970s.

In 1970–73, the coal mining zone emerged as a stronghold of support for President Salvador Allende and his leftist Popular Unity coalition, which tried to implement Socialist reforms within the bounds of constitutional democracy. As part of this project, in December 1970, the Chilean national development agency CORFO (Corporación de Fomento de la Producción de Chile) became the majority shareholder of the country’s largest coal mining company, Carbonífera Lota-Schwager, thus moving the coal industry into the public sector. This period of dramatic experimentation with new social, political, and economic arrangements ended abruptly with a military coup on September 11, 1973, led by Augusto Pinochet. During the sixteen-year dictatorship that followed, the coal mining communities experienced brutal repression, with thousands of people arrested and tortured and hundreds executed.

On my first trip to Chile, in July 1996, less than a decade after the country began its long road back to democracy, coal miners and their families flooded the streets of Santiago on strike against the National Coal Mining Company (Empresa Nacional del Carbón; ENACAR), created under Allende, which was now insolvent and on the verge of shutting down at any moment. Given the centrality of miners in Chile, both as an economic force and as a symbol in the national imagination, an entire era of Chilean history appeared to be coming to an end. The coal miners’ strike became the focus of popular and intellectual debate throughout the country, as reflected in a Sunday feature entitled “Coal Conflict: The End of Working-Class Culture?” in Chile’s leading newspaper, El Mercurio. Here sociologist Elena Irrázabal presented the coal miners as the last vestige of a tradition of radical working-class politics forged in Chile in the twentieth century.

Powerful public images of coal mining derive in part from vivid portrayals—most notably in Baldomero Lillo’s classic 1904 novel Sub-terra—of the arduous work conditions in mines extending deep beneath the Pacific Ocean. Equally important is the region’s historical assertion of a distinct and strong cultural and political identity through which “the Lota coal miners” have appeared as a singular cultural and political force within the nation, particularly at critical junctures. As its historically dominant town, Lota has stood for a diverse region structured around the extraction and transportation of coal.

By mid-1997, all of the large coal mines in the country had shut down, and the region struggled to find viable projects of economic development. Newly created industrial parks tried to attract business, while workers sought retraining to cope with the new economic realities. The famous Lota slope mine known as the “Devil’s Tunnel” (el Chiflón del Diablo) became a tourist site where former miners led underground walking tours. A nearby mansion built for company administrators was converted into a museum, staffed by working-class women dressed up as matrons of the late nineteenth-century local elite. State agencies and nonprofit organizations promoted such projects as a way to “preserve” the region’s unique history and create jobs at the same time.

Despite these efforts, the coal mining region quickly fell to the bottom nationwide in all indicators of social and economic well-being. Elderly coal miners now sat in the central plaza reminiscing about the region’s past, as they watched their grandchildren head north to Santiago or the copper mines in search of work. In the coal mining town of Curanilahue, a new, fully equipped industrial park stood empty, and people soon began to notice a form of reverse migration. Those whose ancestors had migrated from the countryside to the burgeoning coal mines in the late nineteenth and early twentieth century were now heading back to family plots or agricultural estates to eke out a living. With a powerful historical identity and highly charged memories, the coal mining region presented a tragic tale of the social and cultural destruction wrought by adherence to a neoliberal socioeconomic model.

In July 1996, winter in the Southern Hemisphere, I sat in Lota’s huge, dilapidated union hall (fig. 1) talking to desperate coal miners and their leaders as they fought what looked to be their last fight, negotiating for the best possible terms as the industry shut down. It was clear to me that the historical significance of these changes would emerge only through a deep understanding of the politics of industrial relations and class struggle during the region’s twentieth-century heyday. Over the next several years, I studied the coal miners’ role in Chile’s national development model, which began in the 1920s and came to an end with Pinochet’s structural readjustment policies in 1975. Mining for the Nation focuses particularly on the coal miners’ heightened participation in local, national, and international politics during the turbulent 1930s and 1940s. It seeks to show how their collective agency contributed to a deepening of the participatory and socioeconomic dimensions of Chilean democracy.

Several recent events highlight the significance of Chile’s first major period of Center-Left governing coalitions. On June 12, 2009, when former first lady Rosa Markmann, wife of Gabriel González Videla, died at age 101, the Chilean press and public debated the legacy of this presidential couple with an interest not seen for decades. In 1947, President González Videla had sent Army troops into the coal mines to repress worker activism and had then outlawed the Communist Party, which remained illegal for the next ten years.

Also in June 2009, Chilean political scientist Carlos Huneeus published the first major study of the late 1940s, La guerra fría chilena: Gabriel González Videla y la ley maldita (The Chilean Cold War: Gabriel González Videla and the “Damned Law”). The book caused a great stir both in Chilean academic and political circles and in broader Internet forums, partly due to its timing: it coincided not only with the death of Rosa Markmann but also with the signing of a historic pact between the Chilean Communist Party (Partido Comunista de Chile; PCCh) and the centrist governing coalition, the Concertación. Known as the “Agreement Against Exclusion,” the pact was designed to circumvent prejudicial aspects of Chile’s electoral system, which particularly hinders smaller parties such as today’s PCCh. Its signing prompted renewed public reflection about Chile’s prior experiences with coalition politics aimed at making society more democratic, less exclusionary, and more equitable. The story of the coal mining communities in the 1930s and 1940s brings to life one of Chilean history’s least-studied democratic experiments.