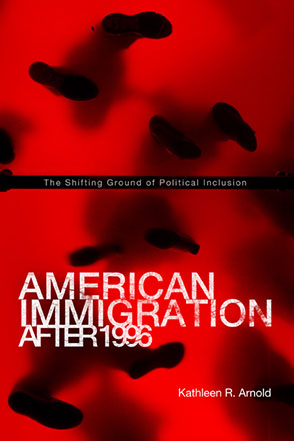 “This book is extremely well researched and cited. A must have for university libraries and highly recommended for graduate students and policy makers.”—I. Coronado, Choice

Few topics generate as much heated public debate in the United States today as immigration across our southern border. Two positions have been staked out, one favoring the expansion of guest-worker programs and focusing on the economic benefits of immigration, and the other proposing greater physical and other barriers to entry and focusing more on the perceived threat to national security from immigration. Both sides of this debate, however, rely in their arguments on preconceived notions and unexamined assumptions about assimilation, national identity, economic participation, legality, political loyalty, and gender roles. In American Immigration After 1996, Kathleen Arnold aims to reveal more of the underlying complexities of immigration and, in particular, to cast light on the relationship between globalization of the economy and issues of political sovereignty, especially what she calls “prerogative power” as it is exercised by the U.S. government.

“This book is extremely well researched and cited. A must have for university libraries and highly recommended for graduate students and policy makers.”—I. Coronado, Choice

“This book will be of great interest to scholars of immigration across the disciplines and, more generally, to political theorists and international relations scholars.”—María Cristina García, Bulletin of Latin American Research

“Scholarly, concise, and lucid, Kathleen Arnold’s American Immigration After 1996 unmasks the psychosocial underpinnings of anti-immigrant ideology, U.S. immigration policy, and the undeclared war on immigrant labor, as part of both a hegemonic agenda for the twenty-first century and a xenophobic reaction to globalization. This is an essential update on immigration history and theory, as well as a coherent new vision of immigration as the transnational phenomenon it truly is.”—Erik Camayd-Freixas, Florida International University

“Kathleen Arnold has written a fascinating account of the ‘undecidable’ status of Mexican immigrants in the United States, as well as factory workers (the ‘maquiladoras’) who work along the U.S./Mexico border. For Arnold, these groups represent the intersection between sovereignty and bare life. Arnold shows how in the United States both right-wing and liberal ‘solutions’ to the ‘problem’ of undocumented immigration collude to produce a group of people without rights. Where the right wing produces the sovereign response, separating these workers from the rest of U.S. society, the liberal solution serves to take advantage of this community’s statelessness and reduce them to merely economic subjects with no legal protections of any kind. In this way there is a kind of unholy alliance between the forces of globalization and neoliberalism on the one hand and sovereignty, nationalism, and racism on the other. In her astute analysis, Arnold identifies a potential for ‘postnational citizenship,’ a status whereby the undecidability of the border offers new hybrid forms of identity that can resist or subvert rather than simply succumb to the pernicious effects of globalization and sovereignty.”—James Martel, San Francisco State University

“Since 9/11, the war on terror and national economic crises have narrowed the parameters of the immigration debate in the United States, even as the vitriol has expanded. More than ever, immigration is a topic crying out for fresh perspective and theoretically informed analysis. Kathleen Arnold’s book offers both.
“Drawing on the work of Michel Foucault and Giorgio Agamben, Arnold uses concepts such as ‘bio-power’ and ‘bare life’ to illuminate the daily struggles and political controversies surrounding immigration to the United States (particularly Mexican immigration), the reconfiguration of state sovereignty in an era of globalization, and the nature of American national identity. In doing so, she challenges unquestioned assumptions about immigration, pushes the discussion beyond ideology and crude empiricism, and ultimately opens space for further innovation in both theory building and policy making.
“Because of its timeliness and theoretical sophistication, American Immigration After 1996 is likely to appeal not only to an audience interested in immigration but also to students and scholars of international relations and political theory more generally.”—Sheila Croucher, Miami University

“Kathleen Arnold examines the contemporary ‘problem’ of immigration—and ‘illegal’ migrants specifically—in a unique and fascinating manner that illuminates how it came to be. In doing so, she identifies and challenges widely held assumptions and provides invaluable insights into globalization, sovereignty, citizenship, and human rights. She puts critical theory to work as one should: to help us understand a messy and complicated ‘reality’ and, more important, to imagine and put into practice a profoundly transformational politics to bring about a more just world. American Immigration After 1996 is of great importance and deserves a wide audience.”—Joseph Nevins, Vassar College, author of Dying to Live: A Story of U.S. Immigration in an Age of Global Apartheid

Kathleen R. Arnold is currently Visiting Professor at DePaul University in Chicago. She is the author of America's New Working Class: Race, Gender, and Ethnicity in a Biopolitical Age (Penn State, 2007).

1. Contemporary Assimilation in the United States

2. Enemy Invaders! Mexican Immigrants and U.S. Wars Against Them

3. Anti-immigration Groups and Civil Society: Pathway to Democracy or Support for Prerogative Power?

4. Homo laborans, Statelessness, and Terror: Economic Deregulation and the Strengthening of Sovereignty

Conclusion: The Right to Rights?

Race, Gender, and Ethnicity in a Biopolitical Age

The Rhetorics of US Immigration