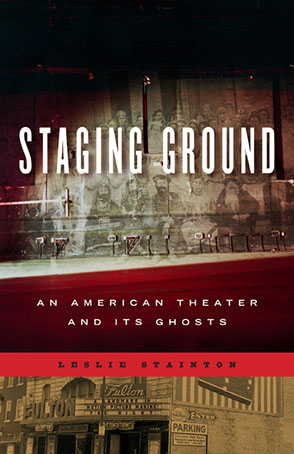 “Rarely does one encounter so trenchant a mix of historical detail (meticulously researched) and personal history (deeply felt). Leslie Stainton weaves the twin strands of her hometown’s Fulton Theatre and her lifelong engagement with drama in ways both delicate and deft; this is one woman’s story, but the story also of our long national wrangle with make-believe and truth. From burial ground to burlesque hall, from jailhouse to opera house and movie theater, the Fulton’s ghosts still haunt this author and, by extension, us.”—Nicholas Delbanco, University of Michigan, author of The Art of Youth: Crane, Carrington, Gershwin, and the Nature of First Acts

In this poignant and personal history of one of America’s oldest theaters, Leslie Stainton captures the story not just of an extraordinary building but of a nation’s tumultuous struggle to invent itself. Built in 1852 and in use ever since, the Fulton Theatre in Lancaster, Pennsylvania, is uniquely ghosted. Its foundations were once the walls of a colonial jail that in 1763 witnessed the massacre of the last surviving Conestoga Indians. Those same walls later served to incarcerate fugitive slaves. Staging Ground explores these tragic events and their enduring resonance in a building that later became a town hall, theater, and movie house—the site of minstrel shows, productions of Uncle Tom’s Cabin, oratory by the likes of Thaddeus Stevens and Mark Twain, performances by Buffalo Bill and his troupe of “Wild Indians,” Hollywood Westerns, and twenty-first-century musicals.

Interweaving past and present, private anecdote and public record, Stainton unfolds the story of this emblematic space, where for more than 250 years Americans scripted and rescripted their history. Staging Ground sheds light on issues that continue to form us as a people: the evolution of American culture and faith, the immigrant experience, the growth of cities, the emergence of women in art and society, the spread of advertising, the flowering of transportation and technology, and the abiding paradox of a nation founded on the principle of equality for “all men,” yet engaged in the slave trade and in the systematic oppression of the American Indian.

“Rarely does one encounter so trenchant a mix of historical detail (meticulously researched) and personal history (deeply felt). Leslie Stainton weaves the twin strands of her hometown’s Fulton Theatre and her lifelong engagement with drama in ways both delicate and deft; this is one woman’s story, but the story also of our long national wrangle with make-believe and truth. From burial ground to burlesque hall, from jailhouse to opera house and movie theater, the Fulton’s ghosts still haunt this author and, by extension, us.”—Nicholas Delbanco, University of Michigan, author of The Art of Youth: Crane, Carrington, Gershwin, and the Nature of First Acts

“An effective framework synthesizing personal memoir with historical overview—and case studies drawn from the annals of the Fulton Opera House in Lancaster, Pennsylvania—produces an insightful study, one that offers an innovative, novel microcosm of American theater in small-town America. Stainton’s extensively researched examination begins with the Fulton’s role in such early events as the Paxton Rebellion and the murder of fourteen Conestoga Indians in the town jail, now the theater’s foundation, and ends with the author’s final departure from Lancaster and the beginning of a new life. This is a fascinating, candid, often entertaining journey, with frequent reflections on crucial issues in our history. Stainton’s book makes an important addition to the literature on American theater and culture.”—Don B. Wilmeth, editor of Cambridge Studies in American Theatre and Drama

“Reading Leslie Stainton’s Staging Ground: An American Theater and Its Ghosts is like having a front-row seat at a thrilling epic drama. Stainton packs her stage with real characters, the famous and the infamous, and events unfold in a tumult of action both tragic and comic and at times heartbreakingly poignant. This book is great theater—immediate, engrossing, cathartic.”—Helen Sheehy, author of Eleonora Duse: A Biography

“Thanks to . . . Leslie Stainton’s wonderfully unique new book, Staging Ground: An American Theater and Its Ghosts, I find that I care about this building I’ve never seen. . . . I can’t recommend this book highly enough.”—KeithTaylor, Ann Arbor Observer

Leslie Stainton is the author of Lorca: A Dream of Life, which received the Society of Midland Authors Award for Biography. Her work has appeared in The New York Times, Washington Post, Opera News, American Theatre, Michigan Quarterly Review, and River Teeth, among many other journals.

No building is static, least of all a theater, whose primary aim is the telling of stories and whose occupants are, for the most part, transients. The Fulton Theatre in Lancaster, Pennsylvania, is particularly mutable. One of the oldest continuously operating theaters in the United States, its history spans at least two centuries, arguably more. For decades I wanted to tell its story—but I wrestled with the problem of how to do so without resorting to numbing detail. A mere account of the more than ten thousand performances that took place in the Fulton from 1852 to the present—never mind its hundred-year existence as a jail prior to 1852—would not begin to convey the complexity of the place, or the Fulton’s significance in the larger story of a young nation struggling to forge an identity. Nor would it capture the bewildering array of personalities who in ways big and small etched their tales into the fabric of this space—from dour James Buchanan and steamy Victoria Woodhull to Richard Jackson, a fugitive slave who in 1825 awaited his fate in what is now the Fulton basement, and the late Michael Mitchell, artistic director of the Fulton from 1999 to 2008, who in his last months of life said he was “at peace,” despite a grave illness, because he had lived his life “in places like this. Grand spiritual enterprises.”

In my search for a way to structure the unruly story of this great American theater, I eventually settled on a framework of two distinct but complementary narratives: the story of Blasius Yecker, who ran the Fulton during its heyday as an American roadhouse, from 1866 until his death in 1903, and whose experience as an immigrant-turned-entrepreneur-and-civic-leader struck me as quintessentially American; and the story of my own coming of age in the 1970s and ’80s, a period when the Fulton reclaimed its status as a venue for live plays, and I worked in the theater as an actress, stagehand, seamstress, office assistant, and member of a children’s theater company. “All history is biography,” said Emerson. That truism underpins much of this book.

Staging Ground is thus both a history and a memoir. I am far from alone in feeling a personal attachment to this building, and my hope is that by filtering the Fulton’s larger story through the smaller lens of my own, I can shed light on both the public and private meanings of this extraordinary space—and convey some sense of the intricate ways that the past and present overlap inside its walls. I could have written about any of the nearly four thousand theaters that existed in towns across America in the late nineteenth century and that shaped the way Americans saw and thought about themselves. Fewer than three hundred of these buildings survive, and most occupy a special place in their communities, as they should. Whether they’ve been lavishly restored or merely spared from the wrecking ball, these are all haunted houses. But the Fulton Theatre has long seemed to me uniquely ghosted—not just because it’s in my hometown or because I worked here in my teens and twenties, but because it is built on sacred ground. Its foundations occupy the site where in 1763 a band of vigilantes murdered the last indigenous people to inhabit Lancaster County when the land was still a wilderness. Those same foundations later served to incarcerate runaway slaves. Thus is the Fulton implicated in the two great crimes on which this nation was built. That a working theater should function for nearly two centuries in such a place strikes me as both absurd and acutely poignant. It’s as if someone had deliberately tried to create a metaphor for the complicated realities of American culture.

The nineteenth-century Shakespearean actor E. L. Davenport called the Fulton “the most beautiful temple of art in the United States,” and it remains one of the most irresistible of American theaters—a crimson and gold wedding cake of a place inside, outside a stately monument to Lancaster-born Robert Fulton, who tinkered with submarines in the Seine and built America’s first commercially viable steamship. Here is a building where America invented itself—where actors shed their European roots to create a genuinely American style of performance, where audiences confronted an image of themselves and who they might become, where a nation wrote and rewrote its history. This singular space resonates in ways no other American theater does. Hence this book, a small gesture of gratitude to a place that has given so much to so many.

A History of the Walnut Street Theatre

From Memory to Memorial