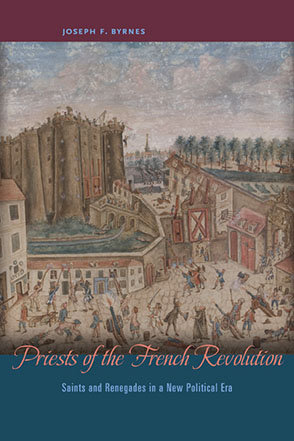 “Joseph Byrnes offers the long-awaited first historical synthesis on the patriot clergy of the French Revolution. A necessary scholarly reconsideration, based on reliable sources, and far from the usual caricatures.”—Paul Chopelin, Université Jean Moulin Lyon III

The 115,000 priests on French territory in 1789 belonged to an evolving tradition of priesthood. The challenge of making sense of the Christian tradition can be formidable in any era, but this was especially true for those priests required at the very beginning of 1791 to take an oath of loyalty to the new government—and thereby accept the religious reforms promoted in a new Civil Constitution of the Clergy. More than half did so at the beginning, and those who were subsequently consecrated bishops became the new official hierarchy of France. In Priests of the French Revolution, Joseph Byrnes shows how these priests and bishops who embraced the Revolution creatively followed or destructively rejected traditional versions of priestly ministry. Their writings, public testimony, and recorded private confidences furnish the story of a national Catholic church. This is a history of the religious attitudes and psychological experiences underpinning the behavior of representative bishops and priests. Byrnes plays individual ideologies against group action, and religious teachings against political action, to produce a balanced story of saints and renegades within a Catholic tradition.

“Joseph Byrnes offers the long-awaited first historical synthesis on the patriot clergy of the French Revolution. A necessary scholarly reconsideration, based on reliable sources, and far from the usual caricatures.”—Paul Chopelin, Université Jean Moulin Lyon III

“In Priests of the French Revolution, Joseph Byrnes provides us with a captivating study of the priests who embraced the Revolution and about whom we know surprisingly little, compared with their Old Regime predecessors and their nineteenth-century successors. The book covers well-known figures, such as the abbés Sieyès and Grégoire, as well as many lesser-known priests who cast their lot with the Civil Constitution of the Clergy, showing the vitality of the French constitutional church during a time of enormous political and cultural upheaval. Written in a lively and engaging fashion, this book should be read by all scholars of the Revolution and of religion in modern France.”—Sarah A. Curtis, San Francisco State University

“Joseph Byrnes has written a completely original and extremely valuable book on the French Roman Catholic clergy who promoted and accepted the ecclesiastical reform known as the Civil Constitution of the Clergy, voted in by the Constituent Assembly in Paris in the years 1790 and 1791. For too long they have been sidelined, positively ignored, and criticized by those who opposed the reform. Byrnes introduces the reader to the faithful and highly intelligent leaders of the many priests (between 58 and 61 percent) who saw the need for change. At the same time, he uncovers those who went on to reject their faith. His story spans the whole of the revolutionary period, including the Terror and the post-Thermidor period, and describes the persecution of the clergy of the Constitutional Church in Napoleon Bonaparte’s empire. A fine achievement.”—Rodney Dean, independent scholar

“In his new book, Joseph Byrnes takes us into the fascinating world of Catholic priests who sought, in different ways, to work with rather than against the French Revolution. Moving beyond a simple narrative of church-state conflict and dechristianization, Byrnes explores the personal and professional dramas of individuals ranging from the abbé Henri Grégoire, who struggled to reconcile Catholicism and the republic through a reformed Constitutional Church, to terrorists such as Jacques Roux, who turned against his past and condemned his clerical colleagues as fanatics and hypocrites. Drawing on their sermons, speeches, letters, and pamphlets, Byrnes allows us to hear a discordant chorus of voices providing a rich commentary on the political and religious history of France during the revolutionary decade of the 1790s. This book will be a valuable resource for historians of France, but it should also draw the attention of scholars interested in the tense and complex relationship between religion and politics that continues to shape our contemporary world.”—Thomas Kselman, University of Notre Dame

Joseph F. Byrnes is Professor of Modern European History at Oklahoma State University. He is the author of Catholic and French Forever: Religious and National Identity in Modern France (Penn State, 2005).

1 The Formation of a Revolutionary Priest: Sieyès and Grégoire

2 The Priests in Action: From Estates General to National Assembly

3 Claude Fauchet at the Bastille

4 The Church of Adrien Lamourette and His Allies

5 The Failed Relationship of Revolutionary Church and State

9 Stabilizing the Constitutional Church: Claude Le Coz and the Council of 1797

10 Constitutional Irresolution in the See of Paris: Jean-Baptiste Royer and the Council of 1801

11 Constitutional Clergy in the Church of Napoleon’s Concordat

12 The Afterlife of the Constitutional Church: Hopes and Reality

Appendix: Administration of the Constitutional Church and Oath Adherence by Department