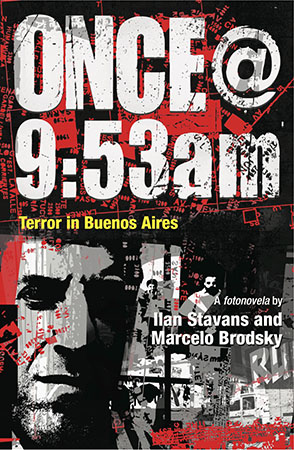 “This is a book that all of us need to read and study, so that we never get accustomed to atrocities and never take them for granted.”—Rabbi Jack Riemer, Jewish News Service

At 9:53 on the morning of July 18, 1994, a suicide bomber drove a Renault Trafic van loaded with explosives into the Asociación Mutual Israelita Argentina, a Jewish community center in the bustling commercial neighborhood of Once, Buenos Aires. The explosion left eighty-five people dead and over three hundred wounded. Originally published in Spanish amid widespread controversy, Once@9:53am: Terror in Buenos Aires imagines the two hours before the attack through the popular format of the fotonovela.

Part documentary, part fiction, this vivid retelling of Argentina’s deadliest bombing depicts a vibrant, complex urban community in the hours before its identity was forever changed. This expanded English edition includes a new essay by Ilan Stavans detailing the aftermath of the attack and the faulty investigations that have yet to yield any arrests or reach resolution.

A unique and powerful visual experience, Once@9:53am is both a commemoration of an atrocity that shifted Latin American Jewish identity in innumerable ways and an ingenious use of a popular format to explore the dangerous intersection of politics and religion in Latin America.

“This is a book that all of us need to read and study, so that we never get accustomed to atrocities and never take them for granted.”—Rabbi Jack Riemer, Jewish News Service

“Creative dream team Stavans and Brodsky skillfully interweave poignant prose with striking imagery that builds to a slow, painful crescendo in the moments leading up to an apocalyptic punctum: the 1994 explosion in the Once neighborhood of Buenos Aires. Everyday Jewish life explodes with dark horror, resonating with a planetary history of Jewish persecution and genocide. Like Jan Komski, Edith Birkin, and Primo Levi, who have dared to turn catastrophic events into art, Once@9:53am exposes the unbearable, tragic tyranny of terrorism.”—Frederick Luis Aldama, author of The Aesthetics of Discomfort (with Herbert Lindenberger) and Your Brain on Latino Comics

“Hemmed in by simplistic conventions, [the fotonovela] seems an unlikely form for so dark a tale as this, and yet it is precisely the ways in which Stavans, who wrote the text, and Brodsky, who took the photographs, both use and modify the conventions that makes Once@9:53am the powerful work it is.”—Mitchell Abidor, Jewish Currents

“A unique work in a unique form that should not be missed by anyone interested in Latin American Jewish culture.”—Julian Voloj, Jewish Book Council

Ilan Stavans is Lewis-Sebring Professor in Latin American and Latino Culture at Amherst College and the publisher of Restless Books. His books include On Borrowed Words (2001) and Quixote: The Novel and the World (2015). He is the general editor of The Norton Anthology of Latino Literature.

Marcelo Brodsky trained at the International Center of Photography, Barcelona. He is a member of the Buena Memoria human rights organization and the Pro-Monument to the Victims of Terrorism Commission.

In a memorable poem called “The Diameter of the Bomb,” Yehuda Amichai wonders, appropriately, what the effects of a terrorist attack are. Depending on its ingredients, the diameter that results from the detonation of a small bomb, of the type made by suicide bombers—that is, the circumference delineated by the explosion—is approximately seven meters. But the circles of pain created around it are far wider, so wide as to build a kind of onion-like structure whose limits are impossible to ascertain: the nearby hospital where the victims are taken to is part of the immediate surroundings, as is the graveyard where those victims are interred. Then come the friends and relatives who knew those who perished or were wounded, and the strangers who attended the funeral, and the people who heard about the tragedy on TV and mourn in distant lands, and the disinterested for whom the whole episode becomes blurry yet asks, puzzlingly, where is God in all this?… So, before you know it, the entire world is part of the concentric circles.

The explosion of the AMIA (Asociación Mutual Israelita Argentina), the Jewish Community Center in Buenos Aires, on July 18, 1994, at 9:53am, that left eighty-five people dead and more than three-hundred wounded, had such an effect. I immediately felt I was in one of its concentric circles. In fact, I remember thinking to myself, was this bomb meant to kill me?

The echoes of that tragedy weren’t only felt across space, within the neighborhood of Once to the rest of the city, Argentina as a whole, the entire region, and further beyond, the Americas and the whole world, but across time as well. Sadly, it continue to have repercussions to this day.

For starters, the incident, which given the monumental terrorists attacks we have gotten used to since then looks relatively small-scale, has a frightening resemblance to the September 11, 2001, attack against the World Trade Center in New York City. The latter is frequently described as “epic,” done after years of planning and using commercial airplanes. The one in the AMIA was caused by a white Renault Traffic van loaded with powerful explosives (about 275 kilograms of ammonium-nitrate fertilizer and fuel-explosive mixture) that was driven next to the building. The van appears to have been positioned about three to five meters away. The entire structure collapsed and so did numerous nearby buildings. The driver and two associates, one of them female, were seen wandering around Once a couple of hours before the incident.

Almost twenty years later, Argentine photographer Marcelo Brodsky, whose brother was one of the desaparecidos, and I felt the need to detail the clockwork that lead to the fatal incident because, although the amount of reporting was substantial, almost two decades after no one had been brought to justice.

The 9/11 attack was performed after years of planning, deep financial support from Al-Qaeda, and a cadre of terrorists willing to live in the shadows in the United States until the time was ripe for their ideological attack to unfold. The animosity, in this case, was against the United States, not Israel or the Jews, although, in the Al Qaeda rhetoric, all three were often intertwined. Perhaps more significantly, Osama bin Laden, the mastermind of the attack, whose tentacles were felt even from his remote location in Afghanistan, portrayed himself as the fundamentalist leader of a stateless, hydra-like organization whose justification was to attacking “the Great Satan” in Washington, a force, it perceived, devoted to destabilizing true Muslims the world over.

To intelligence services, it is obvious that the 9/11 attackers learned from the mechanics the AMIA event. Like the Twin Towers, which were seen as a symbol of American financial power, the AMIA was an attractive target because it represented Jewish interests. Or better, it was an extension of Israeli control beyond the Middle East. It was immediately evident that the perpetrators were Iranian operatives in Argentina. Rumors prevailed, exposés were published.

Actually, the AMIA incident was preceded, on March 17, 1992, by a somewhat smaller explosion, this one targeting the Israeli Embassy in Buenos Aires. Twenty-nine civilians were killed and 242 people were injured. Again, a pickup truck, driven by a suicide bomber, smashed in front of the building. A group called the Islamic Jihad Organization, connected with Hezbollah in Lebanon and also with the Iranian government, claimed responsibility. It said the event was in retaliation for Israel’s assassination of Abbas al-Musawi, Hezbollah’s Secretary General.

The U.S.’s National Security Agency intercepted communication that proved that Iran was involved in the Israeli Embassy case. It pointed to a terrorist cell in the border of Argentina, Brazil, and Paraguay, where a large Muslim community is located. A Hezbollah operative was charged but nothing came of it.As in the AMIA explosion, no one was brought to justice.

Argentina was still reeling from the Dirty War, an ugly period, from 1974 (although some put it half a decade earlier) to roughly 1983, in which a military junta, in power through coup d’etats, had called for a Proceso de Reorganización Nacional, a process of national reorganization whereby dissident were “erased” from society through a variety of intimidating methods that included silencing, intimidation, torture, and disappearance. The atrocities committed during that period were deep and healing, logically, was painfully slow. The Jewish community had inevitably been at the center, dividing families often along generational lines, radicalizing opinions, and breaking solid friendships and political alliances apart.

A decade later, in the early 1990s, Argentina and Iran were hoping to develop a joined nuclear plant. Carlos Saúl Menem was the country’s president. Of Lebanese descent, he was at the helm of the collaboration. Iran was already in the ascent as a significant ideological force in the Middle East. When Menem left office, in 1999, in disgrace, fingers were still being pointed in countless directions for both attacks. No tangible results came about.

A financial crisis at the beginning of the twenty-first century only exacerbated the situation. A quick succession of ad-hoc presidents, some of them lasting only a few hours in power, put the AMIA attack in the back-burner. This changed when Néstor Kirchner, from a left-leaning side of the populist Partido Justicialista, refocused the attention by promising to solve the case. The effort was followed by his wife Cristina Fernández de Kirchner. (The Bill and Hilary Clinton of Argentina, he died of heart failure in 2010, having been expected to run for president again.) During her years in office, from 2007 to the end of 2015, Cristina publicly pushed for a resolution, going as far as to arrange a deal with Iran that included allowing Argentine judges to travel to Teheran to interview potential culprits.

Rather than a breakthrough, the deal was seen by many, including the country’s chief prosecutor, Alberto Nismana divorced father of two, who had Jewish descent, as a betrayal. Nisman believed Cristina’s agreement with the Iranians was a way to muddle the waters even more, so he prepared a dossier in which he blamed the president of criminal conspiracy to stall the AMIA case. Then, on January 18, 2015, hours before he was scheduled to make public his findings before the Argentine Congress, Nisman was found dead in his Buenos Aires apartment.

His body was found in a pool of blood next to one of the apartment’s bathrooms. He had a bullet wound in his head. A .22-caliber gun was in his hand as well as the casting from the bullet. The death was said to be a suicide. Yet the circumstances were fishy. Nisman wasn’t a depressed type. In conversations with friends and acquaintances, he had expressed excitement about the revelations he was about to offer in his meeting with Congress. Why would he die in such way?

For a while, the Nisman case, which never acquired any anti-Semitic undertones, threatened to destabilize Cristina’s government. She defended herself against having ordered Nisman’s execution and explained that having been involved in an effort to silence him, she had provided evidence for him to build his case. Her arguments were contradictory. Public opinion was divided.

In the end, evidence was tainted and detective investigations became more labyrinthine than a Borges story. There was never any resolution. Political intrigue prevailed. Nisman’s case also resulted in impunity.