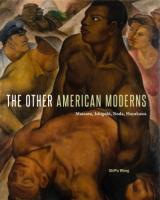 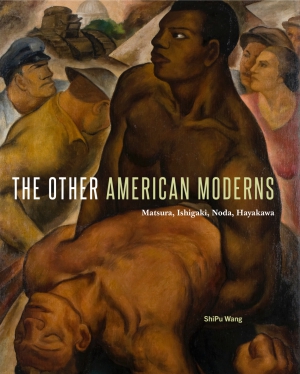 In The Other American Moderns, ShiPu Wang analyzes the works of four early twentieth-century American artists who engaged with the concept of “Americanness”: Frank Matsura, Eitarō Ishigaki, Hideo Noda, and Miki Hayakawa. In so doing, he recasts notions of minority artists’ contributions to modernism and American culture.

Wang presents comparative studies of these four artists’ figurative works that feature Native Americans, African Americans, and other racial and ethnic minorities, including Matsura and Susan Timento Pose at Studio (ca. 1912), The Bonus March (1932), Scottsboro Boys (1933), and Portrait of a Negro (ca. 1926). Rather than creating art that reflected “Asian aesthetics,” Matsura, Ishigaki, Noda, and Hayakawa deployed “imagery of the Other by the Other” as their means of exploring, understanding, and contesting conditions of diaspora and notions of what it meant to be American in an age of anti-immigrant sentiment and legislation.

Based on a decade-long excavation of previously unexamined collections in the United States and Japan, The Other American Moderns is more than a rediscovery of “forgotten” minority artists: it reconceives American modernism by illuminating these artists’ active role in the shaping of a multicultural and cosmopolitan culture. This nuanced analysis of their deliberate engagement with the ideological complexities of American identity contributes a new vision to our understanding of non-European identity in modernism and American art.

“A foundational contribution that enlarges the critical scope of twentieth-century American art history. Through richly conceived case studies, this book foregrounds pictorial strategies employed by four artists of Japanese ancestry active in the United States prior to the Second World War. These artists dynamically engage with American society by speaking to issues of social injustice and by affirming allegiance with groups historically cast as this nation’s ‘Others.’”—Margo Machida, author of Unsettled Visions: Contemporary Asian American Artists and the Social Imaginary

“The result of years of hard archival digging and thoughtful looking, The Other American Moderns recovers the works of four special Japanese American artists. It asks us to rethink what it meant to be an American of Asian descent during the Exclusion Era and charts the artistic savvy—and the courage—it took to express their attachments and commitments to a society that usually saw them as alien. In today’s political climate, especially, this is an urgent and much-needed book.”—Anthony W. Lee, author of A Shoemaker's Story

“The Other American Moderns enriches our understanding of twentieth-century modernism with insightful analyses of photographs and paintings by artists of Asian descent active in the United States. These artists, who interacted with racially and culturally diverse communities, used their images to construct cosmopolitan identities and to establish cross-racial alliances. Beautifully written, every page offers an eye-opening interpretation of modernism, race, and nation.”—Cécile Whiting, author of Pop L.A.: Art and the City in the 1960s

“A novel and extremely interesting project that not only brings forward a set of important but largely forgotten figures, but uses them to tell a larger story about modernism.”—Greg Robinson, author of After Camp: Portraits in Midcentury Japanese American Life and Politics

“ShiPu Wang provides an exemplary, and much needed, account of the important contributions of Asian American artists to the art history of American modernism, challenging how and why that history was originally written and broadening its cultural and sociopolitical scope. Delving into the complex, collaborative, and often ambivalent relationships of cross-racial affinity, diasporic conditions, and national identity, The Other American Moderns is a refreshingly nuanced, well-written, and wonderfully illustrated study, one that promises to spark future research and scholarship on ‘historically overlooked minority artists’ in America.”—Erika Doss, author of Benton, Pollock, and the Politics of Modernism: From Regionalism to Abstract Expressionism

“What did it mean for Japanese/Asian artists to be artistically modern and create a space for themselves as Americans—all while denied the rights of citizenship? In his compelling study, ShiPu Wang illuminates the personal, aesthetic, and sociopolitical implications of this question. He features diasporic communities of producers, commentators, and patrons across the nation,revealing their intricate negotiations of power, social differences, and personal identities. Great to read. Great to teach.”—Ellen Wiley Todd, author of The "New Woman" Revised: Painting and Gender Politics on Fourteenth Street

“[An] ambitious and pioneering book, which serves to cement Wang’s reputation as one of the leading scholars of Asian American art.”—Tom Wolf, Winterthur Portfolio

“ShiPu Wang has made an important contribution to our understanding of American modernism in The Other American Moderns. His study of Frank Matsura, Eitarō Ishigaki, Hideo Noda, and Miki Hayakawa reminds us how limited our knowledge of this movement has been without adequate consideration of Asian American artists.”—Joann Moser, Asian Diasporic Visual Cultures and the Americas

ShiPu Wang is Associate Professor and founding faculty of the Global Arts Studies Program (GASP) at the University of California, Merced. He is the author of Becoming American? The Art and Identity Crisis of Yasuo Kuniyoshi. He also curated and wrote the catalogue for Chiura Obata: An American Modern.

2 By Proxy of His Black Heroes: Eitarō Ishigaki and the Battles for Equality

4 In Search of Miki: Hayakawa, a Californian Cosmopolitan