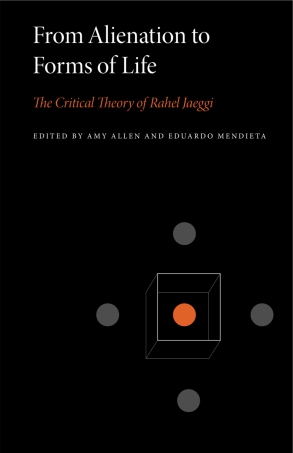 Jaeggi’s innovative work reclaims key concepts of Hegelian-Marxist social philosophy and reads them through the lens of such thinkers as Adorno, Heidegger, and Dewey, while simultaneously putting them into dialogue with contemporary analytic philosophy. Structured for classroom use, this critical introduction to Rahel Jaeggi is an insightful and generative confrontation with the most recent transformation of Frankfurt School–inspired social and philosophical critical theory. This volume features an essay by Jaeggi on moral progress and social change, essays by leading scholars engaging with her conceptual analysis of alienation and the critique of forms of life, and a Q&A between Jaeggi and volume coeditor Amy Allen. For scholars and students wishing to engage in the debate with key contemporary thinkers over the past, present, and future(s) of critical theory, this volume will be transformative.

Amy Allen is Liberal Arts Research Professor of Philosophy and Women's, Gender, and Sexuality Studies and Head of the Department of Philosophy at Penn State University.

4. The Normativity of Forms of Life (Frederick Neuhouser)

5. In Search of the Negative in Rahel Jaeggi’s Kritik von Lebensformen (Max Pensky)

7. On the Politics of Forms of Life (Daniel Loick)

9. Progress, Normativity, and the Dynamics of Social Change: An Exchange between Rahel Jaeggi and Amy Allen (Conducted by Eva von Redecker)

10. Reply to my Critics (Rahel Jaeggi)

Rahel Jaeggi is a leading voice of the new generation of critical theorists working in the rich and storied tradition of the Frankfurt School. Her major publications include Entfremdung (2005), published in English as Alienation (Columbia University Press, 2014), and Kritik von Lebensformen (2013), of which the English translation, Critique of Forms of Life, is soon to be published by Harvard University Press. In addition, Prof. Jaeggi has edited or coedited several volumes, including, most recently, Nach Marx: Philosophie, Kritik, Praxis and Karl Marx: Perspectiven der Gesellschaftskritik (both coedited with Daniel Loick and published in 2013), and she has published numerous essays and book chapters. Throughout this substantial and wide-ranging body of work, Prof. Jaeggi has inventively reappropriated key concepts of Hegelian-Marxist social philosophy, reading those concepts through the lens of such thinkers as Adorno, Heidegger, and Dewey while simultaneously putting them into dialogue with contemporary analytic philosophy. Her work offers a forceful and compelling articulation of the left-Hegelian tradition of critical theory, one that demonstrates how the core concepts and methodological approaches of that tradition can be updated, stripped of their dubious metaphysical baggage, and made fruitful for critical theory in the twenty-first century.

On the Metonymy of the Frankfurt School

Rahel Jaeggi’s work can only be properly understood against the background of the “critical theory” of the “Frankfurt School.” The “Frankfurt School” is in fact a metonymy for “critical theory,” a rich and generative interdisciplinary research agenda and theoretical paradigm that was launched nearly a century ago in 1923, when the Institute for Social Research was endowed and established in Frankfurt am Main. Since its birth, the Frankfurt School’s philosophical agenda and orientation has been neither unified nor homogenous, and its interdisciplinary agenda has continually evolved as it has taken on the challenges of its times. Few movements, schools, or philosophical movements exemplify the Hegelian insight—that “philosophy is its time comprehended in thought”—as has the Frankfurt School.

From Martin Jay, who offered the earliest intellectual history of the Frankfurt School; Raymond Geuss, a British philosopher who provided one of the most acute and succinct overviews of the very idea of a critical theory; and Stephen Eric Bronner, a political philosopher who has written on critical theory and its theorists, we can gather a set of key terms, ideas, and approaches that give coherence to the paradigm called “critical theory.” This paradigm has the following characteristics: an aversion to closed philosophical systems (and Habermas is not an exception, as his Theory of Communicative Action is not a system but a research project that is underwritten by a “fallibilistic” and “reconstructive” methodology); a critical but forward-looking appropriation of thinkers and social science research agendas; a philosophical focus on the subjectivity, interiority, and agency of social and moral agents; a materialist orientation that is attentive to the economic, political, legal, gendered, ethnic, and of course social conditions of agency and subjectivity; a positive but critical appropriation of enlightenment and bourgeois rationalism, which has either turned into ideology or has turned against itself in forms of irrationalisms and aestheticism; a resolute commitment to think through the “dialectical mediations” among the material conditions of the reproduction of social existence, the way in which these modes of existence are reflected in subjective and agential attitudes, and the ways in which they are captured both in “culture” and “social theory”; a complex and ambivalent articulation of modernity that critically appropriates the crucial insights of the great “masters of suspicion”—namely, Marx, Freud, and Nietzsche; and per- haps most importantly, a steadfast refusal to identify or assimilate any form of freedom with the extant institutional arrangements that claim to deliver any modicum of freedom or nonalienation. All these themes or research agendas could be gathered under two basic headings: moral autonomy and the becoming, or history, of freedom, both of which are united in the self-consciousness of a society that is able to direct its own moral development. At the core of critical theory is the rejection of all positivisms, empiricisms, pseudopragmatisms, and naturalisms and the affirmation of self-reflexive critical theory at the service of social emancipation, which has a commitment to the morally autonomous, though not autarkic, subject, who is part of a social project that aims at both individual and collective dignity.

The unruly expansiveness of the category of critical theory is both exhilarating and bewildering. We twenty-first-century critical theorists are like inspired and challenged children trying to decipher who were our intellectual mothers and fathers but also how, whether, and to what extent we want to claim their bequest. The “school,” “paradigm,” “tradition,” “method,” or “movement,” sheltered under “critical theory,” however, claims us, because it is guided by a set of imperatives. We are standing at the foot of the scaffolding of a great edifice still under construction, attempting to articulate the common meaning that we invoke in that name: critical theory. From Alienation to Forms of Life: The Critical Theory of Rahel Jaeggi is a contribution not only to the appropriation of that history but also to the articulation of its future(s).