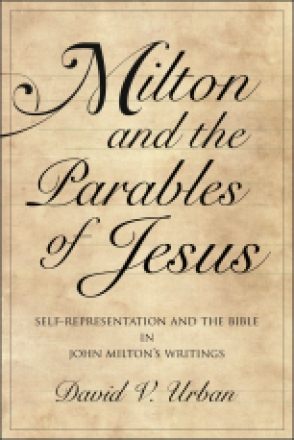 “Urban’s book makes a valuable contribution to an understanding of the parables—of Milton’s use of them—as well as to a comprehension of a significant aspect of the Renaissance and the Reformation.”—Jonathan Locke Hart, Renaissance and Reformation

In Milton and the Parables of Jesus, David V. Urban examines Milton’s self-referential use of figures from the New Testament parables in his works of poetry and prose.

Urban’s informative introduction explores the history of parable interpretation and the writings of sixteenth- and seventeenth-century Reformed biblical commentators, including John Calvin, Matthew Poole, and John Trapp, whose approaches to interpreting the parables resemble Milton’s own. Urban then goes on to analyze Milton’s early poetry and prose; his great epic, Paradise Lost; and his final major poetic works, Paradise Regained and Samson Agonistes. By chronologically tracing Milton’s habit of identifying himself both directly and indirectly with figures represented in Jesus’s parables, Urban delves deeply into the development of Milton’s attitudes toward himself, God, and society.

This comprehensive study opens up a new avenue of inquiry regarding Milton’s hermeneutic of parables and his writings as a whole. Urban’s insightful analysis will be invaluable to scholars and students of John Milton, early modern Christianity and literature, and the Reformation.

“Urban’s book makes a valuable contribution to an understanding of the parables—of Milton’s use of them—as well as to a comprehension of a significant aspect of the Renaissance and the Reformation.”—Jonathan Locke Hart, Renaissance and Reformation

“A significant addition to Milton scholarship in its own right, the book’s detailed endnotes provide a working critical compendium of major studies of Milton over at least the last half-century, up to and including very recent publications. There is not a significant controversy over Milton’s work that David Urban is unwilling to engage, and he does so with judicious fair-mindedness even to scholars with whom he finds himself disagreeing.”—William Shullenberger, Review of English Studies

“Shrewdly engaging Milton criticism, both new and old, and fastidiously taking stock of Milton’s major works, early and late, Urban proves himself a faithful steward as well here. Subsequent studies on Milton’s debt to the parables will have to track through Urban’s house.”—Bryan Adams Hampton, The Seventeenth Century

“Urban’s chapters on the sonnets (especially 7 and 19) and the early poems, as well as his discussion of The Doctrine and Discipline of Divorce and De Doctrina Christiana, make a persuasive case for Milton’s reliance on Jesus’s parables as means of ethical self-conception.”—Ryan Netzley, SEL: Studies in English Literature

“While Urban leaves more work to be done with Milton and parables, this book usefully extends the range of future conversations on that topic. I very much recommend it and urge readers to be sure to read all the notes.”—David Ainsworth, Ben Jonson Journal

“In this highly readable book, Urban offers a sharp focus on the relationship of the personal and the poetic by arguing that, over the course of his life, Milton found deep connections between his own concerns and four of Jesus’s parables from the book of Matthew.”—Elizabeth Skerpan-Wheeler, Renaissance Quarterly

“Perhaps Urban’s most evident strength is his extensive engagement with earlier scholarship and controversies within Milton studies, a prowess surely due at least in part to his role as cocompiler and coeditor of John Milton: An Annotated Bibliography, 1989–1999. With respect to the variety and extensiveness of the notes, Urban is a Miltonist’s Miltonist.”—Joshua R. Held, Modern Philology

“In seeing Milton through the spectacles of the parables and in projecting that vision into his dramatic and poetic works, Urban sheds light on Milton’s meta-narrative of the self, which is at once artistic, theological and existential. Miltonists and readers of Christianity and Literature may welcome Milton and the Parables of Jesus as a major contribution to the study of Milton’s hermeneutic of the Bible and of self.”—Filippo Falcone, Christianity and Literature

David V. Urban is Professor of English at Calvin College. He is the coeditor of Visionary Milton: Essays on Prophecy and Violence and John Milton: An Annotated Bibliography, 1989–1999.

1. The Talented Mr. Milton: A Parabolic Laborer and His Identity

3. Abdiel and the Son: Milton’s Ideal Relationship with the Two Parables in Paradise Lost and Paradise Regained

Part 2: The Parable of the Wise and Foolish Virgins

4. A “Virgin Wise and Pure”: Parabolic Self-Reference in Sonnet 9

5. The Wise Virgin in Action: The Lady of A Mask

7. Perfect and Recovered Virginity in Paradise Regained and Samsom Agonistes

Part 3: The Parable of the Householder

8. “Out of His Treasury Things New and Old”: The Doctrine and Discipline of Divorce and De Doctrina Christiana

9. Milton’s Epic Narrators and the Son and Mary in Paradise Regained