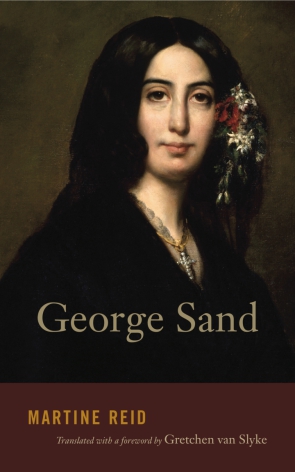 The romantic and rebellious novelist George Sand, born in 1804 as Amantine Lucile Aurore Dupin, remains one of France’s most infamous and beloved literary figures. Thanks to a peerless translation by Gretchen van Slyke, Martine Reid’s acclaimed biography of Sand is now available in English.

Drawing on recent French and English biographies of Sand as well as her novels, plays, autobiographical texts, and correspondence, Reid creates the most complete portrait possible of a writer who was both celebrated and vilified. Reid contextualizes Sand within the literature of the nineteenth century, unfolds the meaning and importance of her chosen pen name, and pays careful attention to Sand’s political, artistic, and scientific expressions and interests. The result is a candid, even-handed, and illuminating representation of a remarkable woman in remarkable times.

With its clear, flowing language and impeccable scholarship, this Ernest Montusès Award–winning biography of the author of La Petite Fadette and A Winter in Majorca will be of great interest to those specializing in Sand and nineteenth-century literature—and to readers everywhere.

“Highly recommended for George Sand devotees, but the audience for this masterly and definitive biography should be legion.”—starred review, Library Journal

“This biography offers an excellent point of entry into Sand’s life and thought, encouraging reevaluation of a famed but perhaps underrated author who felt ‘for humanity . . . because they are me.’”Publishers Weekly

“Patiently illustrates the author’s paradoxes in a work intended for the non-specialist reader. . . . Reid’s writing is level-headed and concise, showing Sand’s engagement with contemporary issues and the way these interests found their way into her writing.”The Economist

“This exciting, intelligent, and informative biography does not dwell solely on Sand’s romantic escapades (though it does do them justice) nor finds it necessary to insist that she was a great writer (which she was); the author takes that as a matter of course. Instead, Reid treats Sand as a worthy biographer should treat a great author, while pointing out the obstacles Sand faced as a woman writer in a repressive century.”—Kathleen R. Hart, author of Revolution and Women's Autobiography in Nineteenth-Century France

“A solid contribution to Sand studies, providing a clear, accessible, well-documented introduction to Sand’s life and works for the uninitiated and a good review for the knowledgeable.”Choice

“Endowed with an impressive lightness of touch and remarkable concision, Reid’s biography is clearly meant to be accessible to a non-specialist readership. In this, however, the book sacrifices none of its scholarliness.”—Claire White, H-France

“This exciting, intelligent, impeccably researched, well-written (and equally well-translated) book is sure to renew the interest of Sand specialists and to attract curious general readers.”—S. Pascale Dewey, Women in French Studies

Martine Reid is Professor of French Language and Literature at Lille University. She is the editor of several critical editions of George Sand’s work, including Mademoiselle Merquem and La Petite Fadette, the latter also published by Penn State University Press.

Gretchen van Slyke is Professor of French at the University of Vermont and the translator of George Sand’s novels The Countess von Rudolstadt and La Petite Fadette, the latter also published by Penn State University Press.

George Sand? Just hearing the name of one of the most famous women in French literature, people, even today, readily express their admiration or aggravation. They really love her or they don’t like her much at all; they can’t get enough of her novels or they basically ignore them. Most people seem to fall in the second category. Take a look at the current literary histories or manuals for high school and university students in France, and you’ll see that Sand continues to occupy a modest place, her work often being reduced to a few “rustic” novels. Yet her place should be right beside the other literary giant of the time, Victor Hugo. Both produced a huge corpus and were eager to make literature a space for moral and political commitment; both exercised the same vibrant influence over the intellectual life of France for nearly half a century, demonstrating the same vigilant care for society and the lower classes, in short, the same way of being in the world, bountiful and generous.

Half admiring, half tongue in cheek, Gustave Flaubert gladly referred to “Mama Sand” and “Papa Hugo,” making these two the symbolic parents of every author in the second half of the nineteenth century, and his own for starters. Yet the way the two of them are treated is quite different, and the same goes for the place reserved to each in France’s literary tradition, the way that these men, women, and the books they wrote are generally remembered. There are all kinds of reasons for this, having to do with their sex, how being a man or a woman conditioned the way they got into literature, the course of their careers, the reception given to their works at the time of publication, and their reputation for posterity. Hugo, whom Sand never met, with whom she had more political affinities than literary ones, no doubt found the best words for sizing up the importance of the woman who was just two years shy of being his exact contemporary. For her funeral in June 1876 he wrote: “George Sand has a unique place in our time. The others are great men; she is the great woman. It is this century’s duty to complete the French Revolution and to start the human revolution, sexual equality being part of mankind’s equality, and so there had to be a great woman. . . . This is how the revolution is fulfilled.”

Yet the majority of France’s “great men” did not share this point of view and would not for quite a while. They preferred to see Sand as “an error of Nature,” unsettling by virtue of her genius or frankly ridiculous by dint of her ambitions to genius. They were revolted by her singularly free behavior that kept the contradictions inherent in private life separate from the convictions that she expressed again and again in her particularly abundant and varied works. More fundamentally perhaps, they were thoroughly annoyed to see a woman abandon her role as muse, mother, as giver of inspiration or consolation, in order to do just what they did. “Bluestocking,” they bellowed, “housekeeper,” “sleepwalker,” “big silly,” “show-off,” “a non-genius,” “a she-ghoul,” “a latrine,” “a ruminating sphinx,” “the Prudhomme of immorality,” “the mum of mush,” “the plague of the Republic,” “the Marquis de Sade’s daughter,” “the novel-writing cow.”

The period’s misogyny was not limited to this deluge of insults. It also churned out loads of caricatures making fun of the woman wearing pants, smoking cigars, dreaming about a “Chamber of Female Representatives,” and spinning her literary yarns among a flock of sheep. Honoré Daumier’s series called The Bluestockings [Les bas-bleus] took aim at the women who wanted to imitate Sand, dreaming of writing novels and, in the meantime, refusing to sew the buttons back on their husband’s trousers. Literary criticism quickly got tangled up in contradictions. Either Sand was mediocre, because she “is a woman and will remain one forever” (Zola), and there’s always been “something very homey about her, like a pot-roast” (Maupassant); from that point on she amounted to “the greatest prejudice of our time, the century’s most routine exercise of admiration” (Barbey). Or, on the other hand, Sand was a genius. In this case, however, “she’s a man and all the more man that she wants to be one and has stepped out of a woman’s role” (Balzac); “a woman made man,” her talent having made a monster out of her: if she’s not “that hermaphrodite genius that brings together a man’s vigor and a woman’s grace” (Dumas), she belongs to some “third sex” (Flaubert).

Endowed with this “narrative genius” hailed by Flaubert, acting as the tireless advocate of the “great forces in charge of the world,” according to Taine, resolute in politics, courageous in the defense of women and peasants, always endeavoring to be perfectly independent in tone, behavior, and expression, Sand had a complicated personality, and the history of her life is no less complicated. Her works, novels, and plays, autobiographical writings and correspondence, reflect this, but like a mirror in a funhouse. In her works Sand undergoes dizzying metamorphoses: “Where would art be, great God! if one not did invent three-quarters of the characters, magnifying their beauty or ugliness, traits in which the stupid and curious public wants to recognize the people they were modeled on?” she asks. For the same reason, the life of the woman who chose to hide under the masculine mask of “George Sand” to get herself into literature and make a name for herself there only sheds light on part of her extremely varied production, and vice versa.

This biography does not aim to account for all of the many lives and publications that made of Sand an extraordinary woman and a woman of letters. Its purpose is more modest: to put forth a series of observations that will allow the reader to size up an exceptional personality and fount of creativity and at the same time to refute a few diehard clichés. Any attempt to talk about all the years of Sand’s life, the men and women who crossed her path, the books she wrote, and the causes she defended could only take the form of a painting with some spots only sketched out. This will be an unfinished portrait of a great woman, but a portrait rich with suggestions about a milieu, a moment, and a singular destiny.

“She has died, here now she lives,” Victor Hugo proclaimed in the funeral oration already quoted. The old man knew how to find just the right words. The same words apply here. After many other attempts at Sand’s biography, it is now a matter of breathing life back into Aurore who became George, Madame Dudevant who all of a sudden became Madame Sand one fine day in May 1832—and of telling her fascinating story.