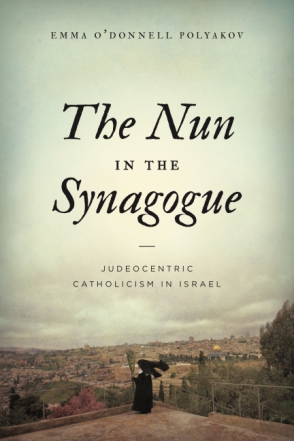 The Nun in the Synagogue documents the religious and cultural phenomenon of Judeocentric Catholicism that arose in the wake of the Holocaust, fueled by survivors who converted to Catholicism and immigrated to Israel as well as by Catholics determined to address the anti-Judaism inherent in the Church. Through an ethnographic study of selected nuns and monks, Emma O’Donnell Polyakov explores how this Judeocentric Catholic phenomenon began and continues to take shape in Israel.

This book is a case study in Catholic perceptions of Jews, Judaism, and the state of Israel during a time of rapidly changing theological and cultural contexts. In it, Polyakov listens to and analyzes the stories of individuals living on the border between Christian and Jewish identity—including Jewish converts to Catholicism who continue to harbor a strong sense of Jewish identity and philosemitic Catholics who attend synagogue services every Shabbat. Polyakov traces the societal, theological, and personal influences that have given rise to this phenomenon and presents a balanced analysis that addresses the hermeneutical problems of interpreting Jews through Christian frameworks. Ultimately, she argues that, despite its problems, this movement signals a pluralistic evolution of Catholic understandings of Judaism and may prove to be a harbinger of future directions in Jewish-Christian relations.

Highly original and methodologically sophisticated, The Nun in the Synagogue is a captivating exploration of biographical narratives and reflections on faith, conversion, Holocaust trauma, Zionism, and religious identity that lays the groundwork for future research in the field.

“In this engaging volume, Polyakov delves into the religious identity of a small group of Roman Catholics, some converts from Judaism, who, while living in the State of Israel, attempt to integrate their own identities, the impact of the Shoah, and the teachings of a post-conciliar Church. The varied responses to these influences are fascinating in their own right and raise important questions for our understanding of Jewish-Christian relations today.”—Rabbi David Fox Sandmel, Director of Interreligious Engagement, Anti-Defamation League (ADL)

“This pathbreaking, important book shows the way along the thorny borders of religious identity, pointing to new and more properly complicated understandings. Emma O’Donnell Polyakov—an elegant writer, a diligent scholar, an empathetic interviewer—proves to be a most reliable guide: trustworthy, alive to hazards, an exemplar of hope on one of history’s most challenging journeys.”—James Carroll, author of Constantine’s Sword and Christ Actually

“The two thousand years of interaction between Jews and Christians have had many twists and turns, but perhaps none as distinctive as what Emma O’Donnell Polyakov calls a ‘Judeocentric Catholicism’ alive today in the State of Israel. Indeed, the spiritualities she describes here would have been impossible before the existence of a nation with a majority Jewish population and the appearance, after the Shoah, of Catholics determined to respect and learn from Jews and Judaism. Her qualitative study testifies to the new era of Christian-Jewish understanding in which we are blessed to live.”—Rabbi Abraham Skorka, co-author with Pope Francis of On Heaven and Earth

“This is an original and important study constituting a phenomenology of a small number of Catholics committed to repairing Catholic-Jewish relations in modern-day Israel. Polyakov’s sensitive interviews and engaging prose open up a challenging landscape: dual identity, Jewish-Catholic relations, and the impact of the Holocaust on Catholic identity are all explored. This book is a significant contribution to ethnography, theology, and the study of religion.”—Gavin D'Costa, author of Catholic Doctrines on the Jewish People after Vatican II

“In an astute analysis of philosemitism and its relationship with antisemitism, the author distinguishes Judeocentricity from these more classic forms of obsessive focus on Jews.”—David M. Neuhaus, Studies in Christian-Jewish Relations

Emma O’Donnell Polyakov is Assistant Professor of Religious and Theological Studies at Merrimack College, the author of Remembering the Future: The Experience of Time in Jewish and Christian Liturgy, and the editor of Antisemitism, Islamophobia, and Interreligious Hermeneutics: Ways of Seeing the Religious Other.

Part 1: The Jewish People Through a Christian Lens

1. Behind the Monastery Walls

3. Christian Constructions of the Jew

7. A Mission Reversed: The Sisters of Sion

Part 3: Religious Identity After the Holocaust

11. Theology After the Holocaust

Part 4: Praying for the Jews

13. Between the Synagogue and the Church

14. The Problematics of Prayer for the Jewish People