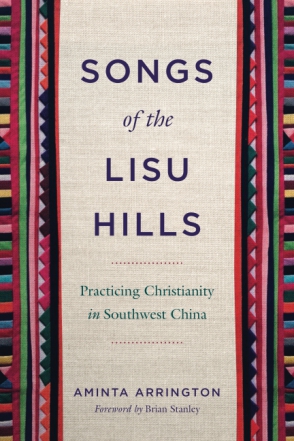 “This original and insightful study of the indigenization of Christianity among Lisu communities in China’s southwestern borderlands is thoroughly researched, convincingly argued, and beautifully written. Aminta Arrington draws on extensive ethnographic information, archival materials, and local Lisu publications to contextualize the making of Lisu churches in the new century.”—Joseph Tse-Hei Lee, author of The Bible and the Gun: Christianity in South China, 1860–1900

Hear the author discuss this book on the New Books Network podcast.
The story of how the Lisu of southwest China were evangelized one hundred years ago by the China Inland Mission is a familiar one in mission circles. The subsequent history of the Lisu church, however, is much less well known. Songs of the Lisu Hills brings this history up to date, recounting the unlikely story of how the Lisu maintained their faith through twenty-two years of government persecution and illuminating how Lisu Christians transformed the text-based religion brought by the missionaries into a faith centered around an embodied set of Christian practices.

Based on ethnographic fieldwork as well as archival research, this volume documents the development of Lisu Christianity, both through larger social forces and through the stories of individual believers. It explores how the Lisu, most of whom remain subsistence farmers, have oriented their faith less around cognitive notions of belief and more around participation in a rhythm of shared Christian practices, such as line dancing, attending church and festivals, evangelizing, working in one another’s fields, and singing translated Western hymns. These embodied practices demonstrate how Christianity developed in the mountainous margins of the world’s largest atheist state.

A much-needed expansion of the Lisu story into a complex study of the evolution of a world Christian community, this book will appeal to scholars working at the intersections of World Christianity, anthropology of religion, ethnography, Chinese Christianity, and mission studies.

“This original and insightful study of the indigenization of Christianity among Lisu communities in China’s southwestern borderlands is thoroughly researched, convincingly argued, and beautifully written. Aminta Arrington draws on extensive ethnographic information, archival materials, and local Lisu publications to contextualize the making of Lisu churches in the new century.”—Joseph Tse-Hei Lee, author of The Bible and the Gun: Christianity in South China, 1860–1900

“A compelling story about the contested Christianity embraced by the Lisu. The author shows how the Lisu have made translated Western hymns their own, how they express their faith in practices rather than in creeds, and how they perpetuate these practices, which serve as boundary markers that help maintain Lisu identity as one of fifty-five minorities in China.”—Michael Rynkiewich, author of Soul, Self, and Society: A Postmodern Anthropology for Mission in a Postcolonial World

“Songs of the Lisu Hills provides real insight into Lisu history and religious experience and into the theological possibilities behind those joyful songs.”—Nathan Faries, Journal of Ecclesiastical History

“This book is highly readable and suitable for readers who are interested in ethnic Christianity in China. At the same time, its scholarly contribution stands out, especially in its anthropological approach to the situation of Lisu Christianity after the establishment of the People’s Republic of China, which can effectively complement the historical research orientation of established studies. In addition, the book’s emphasis on a research perspective of world Christianity and the path of practicing Christianity is conducive to promoting the development of ethnic Christianity studies in China.”—Wei Xiong, Religious Studies Review

Notes About the Lisu Language and Its Usage

1. J. O. Fraser and the Beginnings of Lisu Christianity

3. The Evangelization of the Nujiang Valley

7. Copying the Bible by Torchlight

8. Hymns of the Everlasting Hills

9. Building the House of Prayer

An African Understanding of the Bible

Mobilizing Faith and Justice for an Entangled World