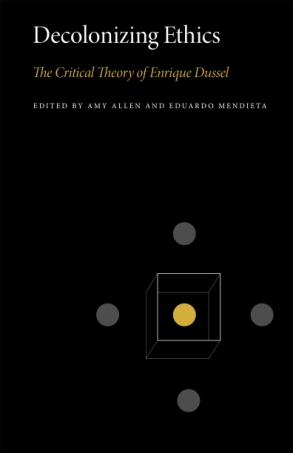 In addition to being one of the most original, prolific, and widely known members of the Latin American Philosophy of Liberation movement, Dussel has also made important contributions to world philosophy, the history of philosophy, the history of the Catholic Church in Latin America, and the understanding of Karl Marx. Dussel famously engaged in a decade-long debate with Karl-Otto Apel on the relationship between material and formal ethics—that is, between an ethics of the community of life and an ethics of the community of discourse—and he has produced novel interpretations and analyses of the concepts of alterity, exteriority, the other, and the world history of ethical systems. Most recently, Dussel extended his work on an ethics of liberation into a politics of liberation, developed over the course of three published volumes.

In this book, scholars from around the world assess Dussel’s work in ways that are both appreciative and critical. Two essays by Dussel bookend the volume: the collection opens with a consideration of the (im)possibility of multiple modernities and ends with an autobiographical trajectory of the philosopher’s thinking.

In addition to Dussel and the editors, the contributors to this volume include Linda Martín Alcoff, Don Thomas Deere, Oscar Guardiola-Rivera, Mario Sáenz Rovner, Alejandro A. Vallega, and Jorge Zúñiga M.

Amy Allen is Liberal Arts Professor of Philosophy and Women’s, Gender, and Sexuality Studies and Head of the Department of Philosophy at Penn State University. She is the coeditor, with Eduardo Mendieta, of From Alienation to Forms of Life: The Critical Theory of Rahel Jaeggi and Justification and Emancipation: The Critical Theory of Rainer Forst, both published by Penn State University Press.

2. Are Many Modernities Possible? A South-South

3. The Hegel of Coyoacán

4. Ideality and Intersubjectivity: Dialectics and Analectics in a Philosophy of Liberation

5. The Upsurge of the Living: Critical Ethics and the Materiality of the Community of Life

6. Ethics of Liberation and Discourse Ethics: On Grounding the Material Principle of Life

7. On the Apophatic Urgency of Now: A Future for the Philosophy of Liberation

8. An Introduction to Liberatory Decolonial Aesthetic Thought: A South-South Path, from Indigenous and Popular Thought in América and from the Sense of Xu in Chinese Painting

9. The Ethics and Politics of Progress: Dussel and the Frankfurt School