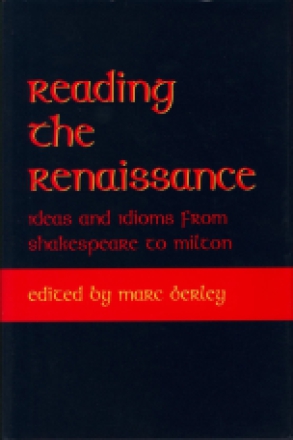 Reading Renaissance literature requires what Edward W. Tayler calls “literary tact,” the willingness to allow poets their own ideas. A reader might best come to understand Renaissance writers by attending, again and again, to their ideas, idioms, and intentions. “Reading,” writes Marc Berley, “is a dangerous act, for how we confront another’s genius reveals much about ourselves.”

The contributors here—Frank Kermode, Marc Berley, Michael Mack, Louis L. Martz, Albert C. Labriola, Anne Lake Prescott, Stanley Stewart, Ernest B. Gilman, Martin Elsky, Anthony Low, Edward W. Tayler—hold that the author, not the critic, is supreme, that the aim of a reader should be, as Ben Jonson urged, to “understand.” These scholars focus on the various Renaissance authors they consider, not contemporary theories or schools that might seem to offer totalizing safety. They are committed to the thrill of reading the Renaissance—not the power of rewriting it. This commitment, not coincidentally, leads them to authoritative new readings of major texts.

Reading the Renaissance makes a powerful corrective statement about the direction in which Renaissance literary studies should go in the wake of critical theory. Unabashed in detailing wrong turns made by critical theory in recent years, this book will doubtless make waves. But it will be most appreciated for its own considerable accomplishments. The essays here are exemplary—signs of how rich, joyous, and indeed critical, engagement with the Renaissance can be in the twenty-first century.

Marc Berley is adjunct associate professor of English at Barnard College, Columbia University, and president of the Foundation for Academic Standards & Tradition. He is the author of After the Heavenly Tune: English Poetry and the Aspiration to Song.