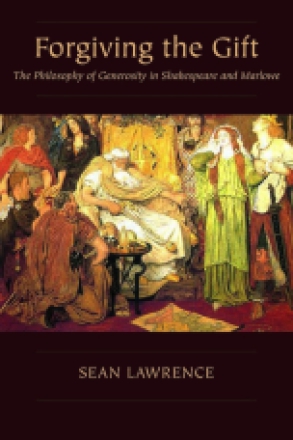 The prologue reads Marlowe’s Dr. Faustus to show how the play aligns gift and grace, depicting Faustus’s famous bond as the instrument simultaneously of reciprocal exchange and of damnation. In the introduction, the author frames his argument theoretically by placing Marcel Mauss’s classic essay, “The Gift,” into dialogue with Jacques Derrida, Emmanuel Levinas, and Paul Ricoeur to sketch two very different understandings of gift-giving. In the first, described by Mauss, the gift becomes a covert form of exchange. Though Mauss contrasts the gift economy with the market economy, his description of the gift economy nevertheless undermines his own project of discovering in it a basis for social solidarity. In the second understanding of gift exchange, derived from the philosophy of Levinas, the gift expresses the radical asymmetry of ethical concern.

Literature and philosophy scholars alike will benefit from the original readings of The Merchant of Venice, Edward II, King Lear, Titus Andronicus, and The Tempest, which constitute the body of the text. These readings find in the plays a generosity that exceeds the social practice of gift-giving, because extraordinarily generous acts of friendship or filial affection survive the collapse of social norms. Antonio in Merchant and the title character in Edward II practice a friendship whose extravagance marks its excess. Lear, on the other hand, brings about his tragedy by attempting to reduce filial love to debt. Titus also discovers a love excessive to social convention when rape and mutilation annihilate his daughter’s cultural value. Finally, Prospero in The Tempest sacrifices power and even his own life for the love of his daughter, giving a gift rendered asymmetrical by both its excess and its secrecy.

While proposing new readings of works of Renaissance drama, Forgiving the Gift also questions the model of human life from which many contemporary readings, especially those characterized as new historicist or cultural materialist, grow. In so doing, it addresses questions of how we are to understand literary texts—and how we are to live with others in the world.

Sean Lawrence is assistant professor of English at the University of British Columbia, Okanagan, and is a past fellow of the Killam Postdoctoral Fellowship at Dalhousie University. His work has appeared in the European Journal of English Studies, English Studies in Canada, Renascence, and other journals.

1. The Venice of Merchants

2. Romans and Venetians on Grace and Exchange

3. “Nothing Will Come of Nothing”: Avoiding the Gift in King Lear

5. The “Dearest Friend” in Edward II

7. Returning to the World: Prospero’s Generosity and Power