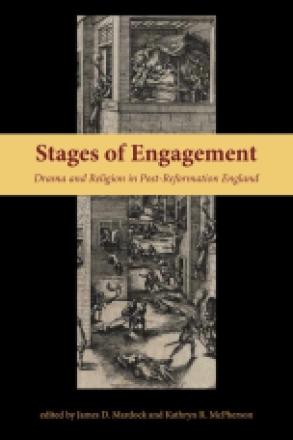 Stages of Engagement, in 12 essays from a wide range of scholars, reflects a reinvigorated concern for religion’s role in the early modern English stage. The essays address reformed redefinitions of intimate, sacred experience, anxiety about Calvinist determinism, attitudes toward icons and representation, and the relationship of liturgy and performance. Importantly, these intertextual discussions are grounded in a meticulously historicized viewpoint that acknowledges the often chaotic and multidirectional nature of Reformation in England.

Throughout, the contributors offer a corrective to the secularization thesis by treating religion on the stage on its own terms while also challenging older histories that see professional English drama evolving from liturgical ritual. Thus, it becomes clear that the confessional makeup of English drama’s audiences cannot be reduced to Protestant and Catholic, or to recusant, Anglican, and Puritan; rather, we must explore the ways in which early modern theater staged its religious culture’s complex negotiations of ideas.

From the early Elizabethan touring companies’ role in disseminating reformed doctrine to the representation of Wolsey and Cranmer in London’s playhouses, English stages were potential sites of encounter—officially sanctioned or not—with mainstream ideology. As Stages of Engagement demonstrates, early modern drama both conveyed and shaped Protestant beliefs and practices, and drama was itself shaped by the religion of its producers and its audiences.

James D. Mardock is associate professor of English at the University of Nevada, where he was named the 2011 Crowley Distinguished Professor of the Humanities. He is the author of Our Scene Is London: Ben Jonson’s City and the Space of the Author, and he has edited quarto and folio editions of Henry V for the Internet Shakespeare Editions, for which he serves as associate general editor. He has also served as the dramaturge for the Lake Tahoe Shakespeare Festival.

Kathryn R. McPherson is professor of English at Utah Valley University and the 2012 recipient of the Trustees Award, the university’s highest honor. She is the coeditor of Shakespeare Expressed: Page, Stage, and Classroom in Shakespeare and His Contemporaries; Performing Pedagogy in Early Modern England: Gender, Instruction, and Performance; and Performing Maternity in Early Modern England.