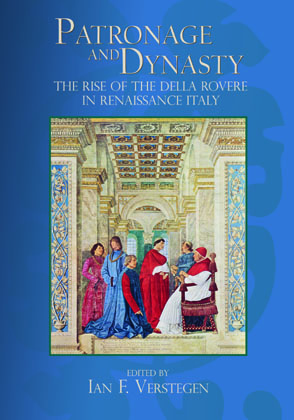 This collection of essays offers a thorough study of the patron-artist relationship through the lens of one of early modern Italy’s most powerful and influential historical families. Contributors present a longitudinal study of the della Rovere family’s ascent into Italian nobility. The della Rovere was a family of popes, cardinals, and powerful dukes who financed some of the world’s best-known and greatest artwork. The essays explore the issue of identity and its maintenance, of carving a permanent spot for a family name in a rapidly changing atmosphere.

Although these studies depart from art patronage, they uncover how the popes, cardinals, dukes, and signore of the della Rovere family constituted their identity. Originally a nouveau-riche creation of papal nepotism, the della Rovere first populated the ranks of cardinals under the powerful popes Sixtus IV and Julius II. Within the framework of later papal relations, the family negotiated its position within the economy of Italian nobles.

“It is fascinating to see, through the various branches of one family, the breadth and diversity of the types of patronage undertaken.... As such, [the book] does its job well, engaging with current debates on a number of different levels and further extending our understanding of the complexities of Renaissance patronage.”Renaissance Quarterly

“Art historians look at the della Rovere family as a whole—from Pope Sixtus IV della Rovere to Francesco Maria II, last Duke of Urbino—as they faced distinct but not uncommon issues at any given time during the dynasty's two-century floriat.”Book News

“The various essays collected in Patronage and Dynasty taken together chart the ways this family laid claim to a kind of cultural and enlightened nobility as time went by, carving a niche for itself through patronage of the arts. The book offers a unique and thorough study of the patron-artist relationship as well as insight into how a notable family constituted its identity over time.”SirReadaLot.org

Avignon to Rome: The Making of Cardinal Giuliano della Rovere as a Patron of Architecture.....Henry Dietrich Fernández

Felice della Rovere and the Castello at Palo.....Caroline P. Murphy

Francesco Maria and the Duchy of Urbino, between Rome and Venice.....Ian Verstegen

Duke Guidobaldo II della Rovere, Federico Barocci, and the Taste for Titian at the Court of Urbino.....Jeffrey Fontana

Francesco Maria della Rovere and Federico Barocci: Some Notes on Distinctive Strategies in Patronage and the Position of the Artist at Court.....Stuart Lingo

Federico Barocci and the Oratorians

Corporate Patronage and Style in the Counter-Reformation