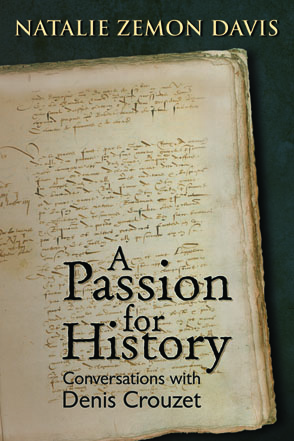 “Natalie Zemon Davis, one of the world’s most creative and influential historians, has always believed in dialogue as a path to knowledge, and these fascinating conversations prove her right. They are must reading for anyone interested in history, the historian’s craft, the role of women in our society, or the lives of engaged intellectuals in the twentieth century.”—Lynn Hunt,

The pathbreaking work of renowned historian Natalie Zemon Davis has added profoundly to our understanding of early modern society and culture. She rescues men and women from oblivion using her unique combination of rich imagination, keen intelligence, and archival sleuthing to uncover the past. Davis brings to life a dazzling cast of extraordinary people, revealing their thoughts, emotions, and choices in the world in which they lived. Thanks to Davis we can meet the impostor Arnaud du Tilh in her classic, The Return of Martin Guerre, follow three remarkable lives in Women on the Margins, and journey alongside a traveler and scholar in Trickster Travels as he moves between the Muslim and Christian worlds.

In these conversations with Denis Crouzet, professor of history at the Sorbonne and well-known specialist on the French Wars of Religion, Natalie Zemon Davis examines the practices of history and controversies in historical method. Their discussion reveals how Davis has always pursued the thrill and joy of discovery through historical research. Her quest is influenced by growing up Jewish in the Midwest as a descendant of emigrants from Eastern Europe. She recounts how her own life as a citizen, a woman, and a scholar compels her to ceaselessly examine and transcend received opinions and certitudes. Davis reminds the reader of the broad possibilities to be found by studying the lives of those who came before us, and teaches us how to give voice to what was once silent.

“Natalie Zemon Davis, one of the world’s most creative and influential historians, has always believed in dialogue as a path to knowledge, and these fascinating conversations prove her right. They are must reading for anyone interested in history, the historian’s craft, the role of women in our society, or the lives of engaged intellectuals in the twentieth century.”—Lynn Hunt,

“Davis’s work and her life are bound by her commitment to justice and humanity, and infused with hope. Her intense enjoyment of her work, so evident in these conversations, is infectious and inspiring.”—Kathleen Wellman, Early Modern Women: An Interdisciplinary Journal

“This is a gracious book. While Davis has been at the forefront of many methodological innovations, and met and worked with many or most of the leading historians of the past fifty years, she does not grind axes. Crouzet's informed and thoughtful questions give readers a sense of how he thinks her work will be judged by future historians, but the interview as a whole focuses on allowing Davis to reflect on her own life and work.”Sixteenth Century Journal

“A Passion for History is based on a series of 2003 conversations between Davis and fellow historian Denis Crouzet, first published in France the following year. It has now been published in a slightly amplified form in English as an elegant paperback that deserves to grace the shelves of both researchers and undergraduates interested in the practice of history. Although Davis has told some of these stories before, the comprehensive self-reflection and the wide-ranging, dynamic exchange between Davis and Crouzet set this volume apart.”H-France Review

“It is clear that either through the “privilege” of collaboration or as a student of their work, Davis’s passion for history and approach to her craft has been influenced by the doyens and doyennes of the discipline and explains why her work has been much lauded, admired, and enjoyed.”Parergon

“Several years ago, Davis sat down with the Sorbonne professor Denis Crouzet for a series of remarkably personal conversations about her life, her writings, and the writing of history in general, which a leading Paris publisher transcribed and published. Now, thanks to Michael Wolfe and Truman State University Press, it has appeared in a concise, readable translation. It is a valuable book.”The New Republic

“A picture emerges of Davis as an original, contemplative and (exceptionally for the academic world) charitable woman whose success rests firmly on her love for the craft of history.”Literary Review of Canada

“History is a passion that pulses strong for many, and both Natalie Zemon Davis and Denis Crouzet share this passion. A Passion for History is a dialogue between historian Davis and professor of history Denis Crouzet. Through their conversations, they discuss a wide variety of history, with a special focus on French Wars, the ancient tensions between the Christian and Muslim worlds, and more, A Passion for History is an endlessly informative and riveting read, a top pick for anyone with an interest in history as a whole.”Midwest Book Review

“A forward by Orest Ranum sets the mood by stating that what the reader will find is not simply a Q&A session, but a genuine, lively dialogue between Crouzet and Davis.... I expect two types of readers to be seized by this gripping interview. On the one hand, it shall be read with great profit by those historians already familiar with Davis's work—critics and votaries alike. On the other, it will serve as a fine introduction to the work of this most innovative historian.”European Review of History: Revue europeenne d'histoire

Natalie Zemon Davis is a social and cultural historian of early modern times. Her published works have been translated into various languages including French, Italian, German, and Japanese. She was historical consultant for the film Le Retour de Martin Guerre and the opera The House of Martin Guerre. Davis has taught at major universities including the University of Toronto, the University of California at Berkeley, and Princeton University. Emerita from Princeton University, Davis is now an adjunct professor of history and anthropology and professor of medieval studies history at the University of Toronto.

Denis Crouzet is professor of modern history at the Université de Paris 4-Sorbonne. He is the author or editor of twelve books, including Les Guerriers de Dieu and Dieu en ses Royaumes.

Michael Wolfe is the author or editor of six books, including The Conversion of Henri IV and most recently Walled Towns and the Shaping of France.