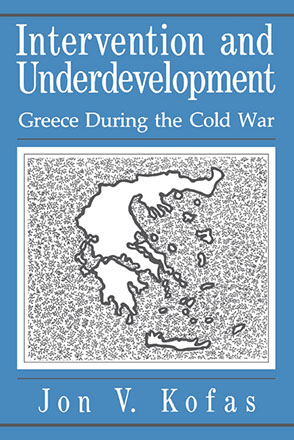 Those who seek meaningful reappraisal rather than beguiling rationalization might well begin with this study, solidly grounded on all available sources. It presents a revisionist perspective regarding both the economic and the political development of Greece under American tutelage. The declared objective of the economic aid was to avoid restructuring of the Greek economy, and to preserve Greece as an exporter of raw materials and an importer of manufactured goods. Kofas asserts that an alternative program similar to that of the northern Balkan countries was feasible, and that failure to undertake such a program is vulnerable of today's Greek economy.

Likewise in the political realm, Kofas rejects the Washington dogma that Greece has to be in either the Soviet or the American camp, and therefore must be in the latter. Kofas proposes as a "plausible alternative" a social-demographic regime that, in addition to socioeconomic reforms at home, could have pursued abroad a pro-Greek rather than a pro-Soviet or pro-American course.

The victory of the American-supported forces in Greece obscured this alternative vision for decades. Yet it was persistently propounded, in the face of discouraging odds, by a variety of centrist and leftist leaders. With the coming to office of Andreas Papandreou, this vision has become official policy in Athens. Furthermore, assorted versions of this alternative strategy are cropping up globally, which is the underlying reason why the Third World today is out of control. And also why superpower doctrines and projects not recognizing this indisputable and irreversible fact are experiencing difficulties as embarrassing as they are predictable. Hence the broad significance of this thoughtful and thought provoking study. —From the Foreword by L. S. Stavrianos