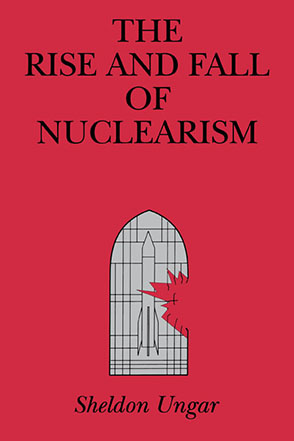 While not denying explanatory value to bureaucratic, technical, political, and economic factors, The Rise and Fall of Nuclearism focuses attention instead on the cultural dimensions of the arms race. It traces the long-term secular changes in Western societies that made the faith in "nuclearism" possible to begin with; and it draws on sociological concepts to explain how such a misplaced faith accrued to nuclear weapons and why this faith eventually came undone. The concept of "moral panic" is central to the argument. Ungar shows that moral panics were precipitated by authentic surges of fear responding to perceived Soviet challenges to American nuclear supremacy; these panics provided the political leverage for large-scale nuclear buildups and made possible the growth of the military-industrial complex in the United States. Elite efforts to orchestrate panics, however, typically failed or backfired.

The key to understanding the episodic nature of the arms race, Ungar argues, lies in the dynamic oscillation between nuclear worship, which viewed the "bomb" as the source of salvation, and nuclear dread, which conjured up images of vaporized cities and an end to civilization. In the concluding chapter he discusses what role nuclear fear—about proliferation, for instance—may continue to play in the post-Cold War world.

Sheldon Ungar is Associate Professor of Sociology at the University of Toronto.