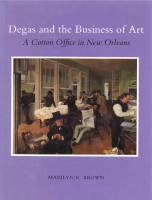 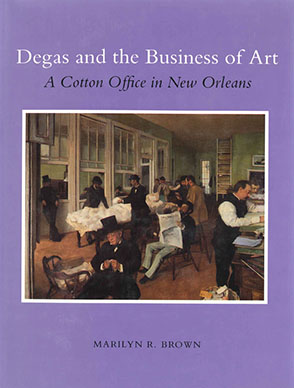 Despite the financial failure of the actual cotton firm he represented, Degas carefully constructed his picture with a particular buyer—a British textile manufacturer—in mind. However, world events, including an international stock market crash and declines in the market for cotton and art, destroyed his hopes for this sale. It was under these circumstances that the canvas was exhibited in the second Impressionist show in Paris in 1876. While it received a more positive response than other works exhibited, its success was with the conservative audience. After considerable difficulty, Degas finally succeeded in selling the painting in 1878 to the newly founded museum in the city of Pau. The painting was probably regarded as an appropriate homage to the old textile manufacturing family who funded its purchase. It also appealed to "progressive" provincial and more cosmopolitan audiences in Pau.

The picture's scattered form and atomized figures—in which some interpreters today read evidence of the artist's own ambivalence about capitalism—seemingly contributed to its "innovative" cachet in Pau. But the private and public meanings of the painting had shifted, in discontinuous fashion, between its production and consumption. Under the circumstances, Degas's unfixed and even mixed messages about business became, among other things, his most successful (if unwitting) marketing strategy. The official recognition Degas received in Pau in 1878 heralded the gradual upswing of his own financial status during the 1880s, but his attitudes towards success remained mixed.