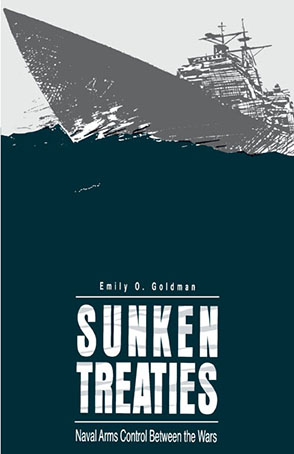 “Emily O. Goldman presents an interesting and stimulating interpretation of the interwar naval conferences. . . . Goldman’s effort is an important interpretive contribution that adds much to the ever-growing debate on the Washington Conference.”—Journal of American History,

In this analysis of naval arms control between the two world wars, Emily Goldman dissects the underlying assumptions of arms control theory that have guided theorizing and practice for the past thirty years. She concludes that because there has been a near-exclusive focus on the behavior of the superpowers and on the consequences of nuclear technology, the arms control process has been artificially constrained in its scope and potential. Returning to the most important historical precedent of arms control prior to the Cold War, Goldman demonstrates that there are two distinct strategies of arms control, one that integrates force limitation with political conflict resolution and one that confines itself to technical limitations exclusively.

Goldman's is the first analytical treatment of the interwar period that examines arms control in both its technical and conflict-resolution dimensions in tandem and traces them through the entire life of the arms control system. By debunking Cold War orthodoxy about arms control and by illuminating how arms control functioned between the wars, Goldman shows how the process of arms control can transcend the narrow goal of regulating the military balance and become a constructive tool for restructuring power relationships.

“Emily O. Goldman presents an interesting and stimulating interpretation of the interwar naval conferences. . . . Goldman’s effort is an important interpretive contribution that adds much to the ever-growing debate on the Washington Conference.”—Journal of American History,

“Sunken Treaties makes an important contribution to the study of arms control. Unlike many examinations of arms control that narrowly focus on weaponry and their characteristics, this study puts arms control within a broader international political framework. Goldman analyzes a complex attempt at multilateral arms control that sought to limit a variety of nonnuclear weapons technologies. This perspective on arms control—multilateral and nonnuclear—is of great importance for understanding better the dynamics of the post–Cold War international security environment. By providing a broader perspective, Sunken Treaties helps enhance the theory of arms control, providing guidelines for evaluating when it might be effective and when it is likely to fail.”—John H. Maurer, U.S. Naval War College

Emily O. Goldman is Assistant Professor of Political Science at the University of California, Davis.