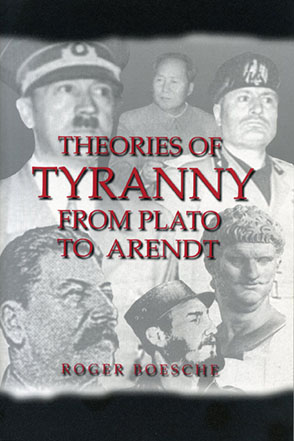 “A great achievement in the scholarship of political philosophy. Anyone who wants to think deeply about the meaning of tyranny must read it.”American Political Science Review (APSR)

This book explores a little-noticed tradition in the history of European political thought. From Plato to Aristotle to Tacitus and Machiavelli, and from Tocqueville to Max Weber and Hannah Arendt, political thinkers have examined the tyrannies of their times and have wondered how these tyrannies come about, how they work, and how they might be defeated. In examining this perennial problem of tyranny, Roger Boesche looks at how these thinkers borrowed from the past—thus entering into an established dialogue—to analyze the present. Although obviously tyrannies are not identical over time (Hitler certainly did not rule as Nero), we can learn partial lessons from past thinkers that can help us to better understand twentieth-century tyrannies.

“A great achievement in the scholarship of political philosophy. Anyone who wants to think deeply about the meaning of tyranny must read it.”American Political Science Review (APSR)

“Lucid in its analysis and accessible in style, Boesche’s book will prove to be a wonderful companion piece for students looking for a fresh interpretive angle on the classic texts of political philosophy.”Review of Metaphysics

“This book is an unexpected pleasure. Unexpected, because the topic of tyranny might seem antiquated, dark, and plain uninviting. But the subject becomes perversely fascinating under Roger Boesche’s pen. Written in steady, jargon-free prose, Theories of Tyranny holds the reader’s attention and sustains one’s interest over the course of almost 500 pages. . . . Each well-researched chapter contains insightful gems. . . . The strength of the book—I would even say the marvel of the book—is that Boesche truly identifies or at least creatively redescribes an entire subterranean ‘tradition’ of discourse in the European canon just at the time when that form of theorizing was thought to be exhausted or discredited.”Political Theory

“[Boesche’s] treatment of such different authors as Tacitus, Tocqueville, and Freud is clever, elegant, and never perfunctory; his final definition of tyranny as ‘the form of government that least meets human needs’ is both correct and attractive, for it reminds us that tyranny is not only the symbol of political evil but also an actual form of government that too many people have experienced.”Booklist

“This book is not only a significant historical and analytical study of the idea and concept of tyranny—a project that is in itself unique and distinctive—but a sensitive and creative rendering of the classic texts that are discussed as well as of the work of twentieth-century theorists such as Arendt.”—John Gunnell, SUNY at Albany

1. Plato: The Political Psychology of Tyranny

3. Tacitus: Tyranny as a Politics of Pretense

6. Tocqueville: The Pleasures of Servitude

7. Marx: Despotism of Class and Workplace

8. Freud: The Reproduction of Tyranny

9. Weber: The Inevitability of Bureaucratic Domination

Language, Contestation, and the Shaping of Political Agency