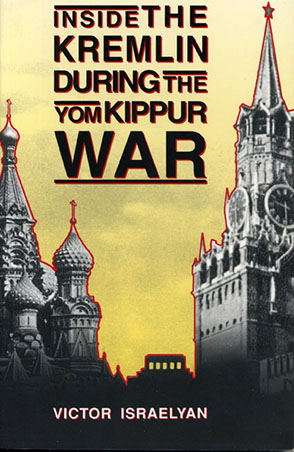 Victor Israelyan was a senior ambassador in the Soviet Foreign Ministry when the armies of Egypt and Syria invaded Israeli-occupied territory on October 6, 1973. Critical to the outcome of this conflict were the Soviet Union and the United States, whose diplomatic maneuverings behind the scenes eventually ended what came to be known as the Yom Kippur War. During the crisis, however, tensions between the superpowers nearly escalated into nuclear war. Israelyan is the first Soviet official to give us a firsthand account of what actually happened inside the Kremlin during these three important weeks in 1973.

Israelyan's account is a fascinating mixture of memoir, anecdotes, and historical reporting. As a member of Soviet Foreign Minister Andrei Gromyko's staff, he was assigned to a four-man task force that attended the many Politburo meetings held during the war. The job of this task force was to take notes and prepare drafts of letters and other documents for the Politburo. In remarkable detail, made possible by his sharp memory and the notes and documents he saved, Israelyan chronicles the day-by-day activities of Kremlin leaders as they confronted the crisis. For the first time we can see how the cumbersome Soviet policy-making mechanism, headed by the Politburo, functioned in a tense international situation. We see how the actions of Henry Kissinger, Anwar Sadat, Hafiz al-Assad, and other participants in the crisis were interpreted in Moscow. From his own experience Israelyan gives us intimate portraits of top Soviet officials including Brezhnev, Gromyko, and Andropov. His access to important documents—including letters from Richard Nixon to Leonid Brezhnev, never officially released in the U.S.—provide a much-needed corrective to assertions made by Kissinger, Nixon, and Sadat about the war.

Supplemented by rare photographs and interviews with other Soviet officials, Inside the Kremlin During the Yom Kippur War is more than a record of the past. Israelyan offers a unique vantage point on the continuing Middle East conflict, and his candid assessment of the mindset of Russian leaders is instructive for understanding how the present leadership of Russia faces its new role in the post-Cold War world.

“For more than 20 years, scholars and pundits have been writing about the October 1973 Arab-Israeli war with one enormous handicap: the missing piece of the puzzle was what was going on in Moscow during a crisis that brought the world to the brink of confrontation and set the stage for the unraveling of détente. Now a Kremlin insider has written the book that shines light on precisely this hitherto mysterious topic-and what a story it is! Almost all the assumptions about Soviet policy made by leading diplomats and scholars—American, Israeli, and Arab—seem to have been wrong. . . . One wishes other Soviet diplomats of Israelyan's caliber would write honest memoirs of this sort on the other great crises of the Cold War. But for now, his stands alone as a model to be emulated.”Foreign Affairs

“. . . [A]n extraordinary and unprecedented memoir from a Soviet observer, Ambassador Victor Israelyan . . . . Writing from his notes, recollections, and interviews with other diplomats and policy makers, Israelyan has provided the first authoritative account of policy deliberations among Politburo members on any issue and, until Kremlin archives are opened, the most complete description of Politburo politics during a crisis.”Middle East Journal

Victor Israelyan has had a rich and distinguished career as a physician, diplomat, scholar, and professor spanning more than five decades. During the 1970s and 1980s, he was one of the Soviet Union's leading diplomats specializing in disarmament negotiations. He retired from the Foreign Ministry in 1987. He has written more than ten books, including Russian Diplomacy in Transition (Penn State, forthcoming).

1. Training for the Cold War

2. The First Collisions of the Cold War

4. Sowing the Seeds of Hatred in Hungary

5. The Khrushchev Style of Diplomacy

7. On the Diplomatic Sidelines

10. The Cold War on the Middle East Front

14. An Uneasy Truce in the Cold War

15. The Apotheosis of the Cold War

17. The Beginning of the End of the Cold War

19. Farewell to the Cold War

As God would have it, I lived in a country that was in the midst of a tragic social-economic experiment. The goal was to build a new society, a society with neither poor nor rich, oppressed nor oppressors, where justice prevailed over inequality. The country that declared such noble goals achieved great accomplishments. By putting the lives of 27 million of its sons and daughters on the altar of victory, it helped to rid the world of the menace of fascism. It was the first country to successfully explore space. So powerful did this country become that by the latter half of the twentieth century it was recognized as one of only two superpowers determining the face of the modern world. At the same time, monstrous crimes were committed in this very same country; monstrous crimes against its own citizens, including mass murders and terrible infringements of human rights and freedoms. This is what gave rise to the label “evil empire”—a label that reverberated with shame throughout my country. I personally felt this shame, knowing that I shared the responsibility for the crimes and violations.

Nonetheless, I was a believer in the experiment, and to the best of my ability I served the system that had been created to support that experiment. Over the course of my forty years of service in the Foreign Ministry I gained a reputation among my colleagues and partners in negotiations as a knowledgeable diplomat. My service was appreciated highly; I was awarded nearly twenty governmental orders and medals, a state prize, ranks, and other decorations. Hundreds of times I sat in conference halls, negotiating at tables beneath a plaque bearing the name of the Union of Soviet Socialist Republics, and I always felt proud and honored to be representing the interests of such a great country. In the end, however, the Soviet experiment collapsed under the weight of its contradictions. And the irony for me was that I was a casualty of these contradictions, forced to resign in shame after having always tried to fulfill my duties.

I resolutely oppose those of my countrymen, including my fellow diplomats, who shift responsibility for the Soviet evil exclusively to the leaders. No doubt the leaders must bear a lion’s share of the responsibility, since they were, so to speak, directing the show, but the others—party functionaries, bureaucrats, diplomats, military officers, scientists, artists, and more—participated in this show. Surely some played greater roles than others, and many did so out of fear, but it is important that each Soviet citizen realize and admit his or her share of the responsibility.

Memoirs are worthless if their authors attempt to present themselves as angels. I hope, therefore, that I do not belong to the unfortunately large group of former Soviet functionaries (party and governmental “apparatchiks,” bureaucrats, diplomats, and others), who have written memoirs in which they try to convince their readers that during their sometimes stellar careers they always saw the errors and blunders of the Soviet leadership. Some of them belonged to the very leadership they now criticize, and yet we are supposed to believe that they apparently stood firm against these errors, but alas in vain. This seeming opposition did not prevent these men from climbing the ladder of service, for some were elected as delegates to the Supreme Soviet, some became members of the Party’s Central Committee, and some even became CPSU secretaries, being assigned to prestigious and important posts all along the way. In actuality, any noticeable opposition would not have been tolerated and would have resulted in strict punishment in the totalitarian Soviet state. Some authors, for example, former CPSU functionaries, claim to have sympathized with the “Prague Spring” and yet they advanced in the apparatus precisely because they had participated in its suppression. After the disintegration of the USSR, Politburo members who once headed the KGB in Soviet republics claimed to be champions of human rights and fighters for democratic freedoms. We shall leave it on their conscience.

It is important that we have firsthand accounts from those who held the highest leadership positions in the Soviet Union. Less recognized, but equally interesting and important, are the ordinary civil servants who labored in the trenches—the middle tier of the Soviet State apparatus. I myself belonged to this tier; and therefore, it is what I have concentrated on in writing my memoirs.

In the summer of 1991 I was invited by the Fulbright Foundation to teach a course on Soviet foreign policy at Pennsylvania State University. I accepted this invitation with pleasure; but when I left Moscow for the United States in the days of the August 1991 coup, I could not imagine that I was leaving a country that soon would cease to exist. So sudden was the Soviet collapse that I had to alter the course I was teaching at the time. Continuing to hold forth on the foreign policy of a nonexistent state somehow seemed inappropriate. In the years that followed I was invited many times to lecture and to participate in conferences. Invariably, the one subject I was always asked to speak about was the Soviet collapse. Why had it happened? Even today I find it impossible to fully explain the fall of the Soviet state. I do not even attempt such an explanation here. Rather my aspiration is to bring to life, as best I can, one part of the Soviet experience to which I devoted all my life. I cannot claim to be objective but I have tried to be as evenhanded as possible in the hope that future observers will have one more piece of the puzzle as they seek to understand the tragedy that was the Soviet experiment.