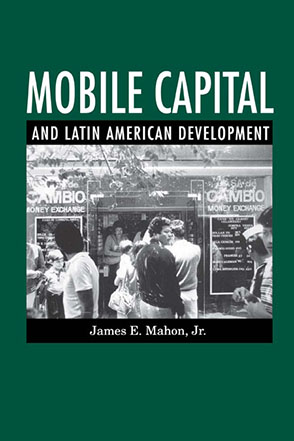 “Mobile Capital offers an outstanding study of capital flight, along with thought-provoking reflections on the political implications of neoliberalism.”American Political Science Review (APSR)

Particularly timely in light of the recent Mexican peso crisis, Mobile Capital and Latin American Development examines the causes, consequences, and implications of the Latin American capital flight of the 1980s. It addresses the increasingly mobile and privatized nature of international capital and its power to shape economic policy in those countries.

Through a comparison of the policy experiences of Argentina, Brazil, Chile, Colombia, Mexico, and Venezuela, James E. Mahon finds that those countries that suffered the most capital flight had previously faced fewer structural trade problems and had not reoriented their exchange policies to diversify exports and deal with exchange-market instability. Since the countries that stumbled worst into capital flight before the debt crisis were later among the most aggressive neoliberal reformers, Mahon discusses the ways in which overseas capital served as a kind of pressure for free-market reform. Finally, the idea that internationally mobile capital now can operate as a kind of senate—an arm of the wealthy few, guarding the established order against the arbitrary, dangerous tendencies of the executive and popular chamber—is examined with relation to theories of dependency and the institutionalization of democracy.

“Mobile Capital offers an outstanding study of capital flight, along with thought-provoking reflections on the political implications of neoliberalism.”American Political Science Review (APSR)

“The problem of capital flight has been important for understanding constraints on development in Latin America and the turn toward neoliberalism in the past decade, and this book offers a focused discussion of the issue particularly valuable for highlighting its political dimensions. It is a timely work that should be of interest to scholars beyond just those specializing in Latin American studies.”—Manuel Pastor, Jr., Occidental College