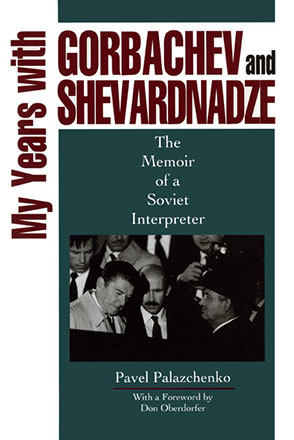 “There are few subordinates better placed to describe the amazing turn in Soviet foreign policy between 1985 and 1991 than Pavel Palazchenko. . . . He has produced a solid, reliable account . . . that will be important supplementary reading for future historians and students of the Cold War.”Washington Post Book World

As the principal English interpreter for Mikhail Gorbachev and his foreign minister, Eduard Shevardnadze, in the critical period of 1985–1991, Pavel Palazchenko participated in all U.S.-Soviet summit talks leading to the end of the Cold War. This personal and political memoir sheds new light on Soviet/American relations and personalities during that time.

Palazchenko focuses on what he saw with his own eyes during important negotiating sessions with world leaders such as Presidents Ronald Reagan and George Bush, Secretaries of State George Shultz and James Baker, and Prime Minister Margaret Thatcher. He shares his impressions and opinions about these leaders as well as their Soviet counterparts and gives a firsthand account of the phase of preparation leading up to important international events, including the process of hammering out positions on sensitive arms control issues. Palazchenko describes the events themselves, such as the summits in Reykjavik, Malta, and Moscow, adding many fascinating details to previous accounts.

Palazchenko contends that the peaceful end of the Cold War was possible not because of some behind-the-scenes dealings, but because of the trust that gradually developed between world leaders. He shows us how this developing trust led to the remarkably peaceful transition from the dangerous pre-1985 confrontation to the new relationships between major powers. This book sheds light on Soviet thinking about Soviet-U.S. relations, the Third World, arms control, German reunification, and the Gulf War. It also provides an insider's view of domestic politics and policy during Gorbachev's last year in power and Soviet developments leading up to the collapse of the USSR.

“There are few subordinates better placed to describe the amazing turn in Soviet foreign policy between 1985 and 1991 than Pavel Palazchenko. . . . He has produced a solid, reliable account . . . that will be important supplementary reading for future historians and students of the Cold War.”Washington Post Book World

“The historical record is fortunate that a man as gifted and capable as Pavel Palazchenko served as interpreter for Gorbachev and Shevardnadze from 1985 through the fall of the Soviet Union. His is a keen mind, and his recollections and observations add to our understanding of those crucial years.”—James A. Baker, III, 61st U.S. Secretary of State

“Palazchenko was always more than a gifted interpreter, and his book is thereby an especially revealing account of pivotal events and pivotal people. A compelling read.”—George P. Shultz, 60th U.S. Secretary of State

“The memoirs of Pavel Palazchenko are remarkably revealing—not in the sense of sensational new disclosures, but in the re-creation of the thinking and decisions of the Soviet leaders, in particular illuminating their relationships with Presidents Ronald Reagan and George Bush and Secretaries of State George Shultz and James Baker. It is a straightforward account by a keen observer at closest hand, full of insight, and makes a real contribution to understanding the history of these crucial final years of the Cold War and of the collapse of the Soviet Union. It is, as well, well-written and a pleasure to read.”—Raymond L. Garthoff, The Brookings Institution

Pavel Palazchenko is a consultant to the Gorbachev Foundation, a Moscow-based think tank founded by Mikhail Gorbachev. He also teaches at Moscow Linguistic University and works as a freelance interpreter. From 1980 to 1991 he served in the Foreign Ministry and in the Executive Office of the USSR President, before which he was an interpreter with the United Nations.