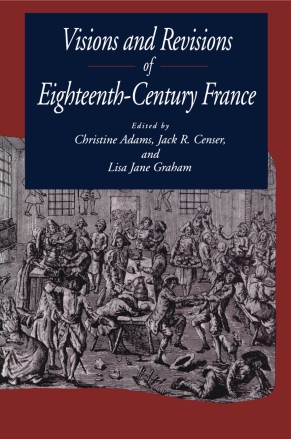 The articles encompass the Old Regime and the revolutionary era without falling into the teleological trap of using the former as the backdrop for the events of 1789. On the contrary, many of the authors consciously avoid this bias by investigating the Old Regime in its own right or by consciously linking the pre- and postrevolutionary eras. This decision alone marks an important turning of the tide. By establishing a dialogue between the Old Regime and the revolution, this volume implicitly pays homage to those historians who insist on the structural continuities that underlay the rupture of 1789.

Christine Adams is Assistant Professor of History at St. Mary's College of Maryland.

Jack R. Censer is Professor of History at George Mason University. His most recent book is The French Press in the Age of Enlightenment (1994).

Lisa Jane Graham is Assistant Professor of History at Haverford College. She is the author of If the King Only Knew: Seditious Speech in the Reign of Louis XV (2000).

A Taste for Comfort and Status

A Bourgeois Family in Eighteenth-Century France

Friendship and Politics in Post-Revolutionary France