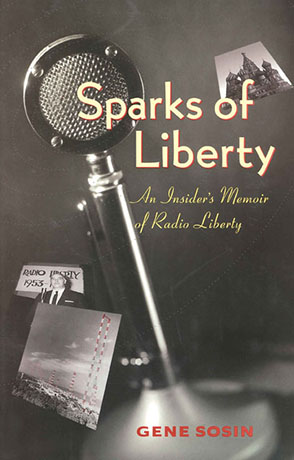 During the Cold War, one of America's most powerful weapons struck a major blow against tyranny every day over the airwaves. Radio Liberty became a critical source of information for listeners within the Soviet Union, broadcasting in Russian and more than a dozen other languages, and covering all aspects of Soviet life.

Sparks of Liberty provides an insider's look at the origins, development, and operation of Radio Liberty. Gene Sosin, a key executive with the station for thirty-three years, combines vivid eyewitness reports with documents from his personal archives to offer the first complete account of Radio Liberty, tracing its evolution from Stalin's death to the demise of the USSR, to its current role in the post-Soviet world.

Sosin describes Radio Liberty's early efforts to cope with KGB terrorism and Soviet jamming, to minimize interference from the CIA, and to survive pressure exerted by J. William Fulbright, chairman of the Senate Foreign Relations Committee, who considered Radio Liberty a deterrent to détente. The insider's perspective sheds important light on world affairs as Sosin tells how, over the years, Radio Liberty took the advice of experts on Soviet politics to adapt the content and tone of its messages to changing times.

The book is rich in anecdotes that bring home the realities of the Cold War. Sosin tells how famous Western political figures, educators, and writers broadcast messages about workers' rights, artistic freedom, and unfettered scholarly inquiry—and also how, beginning in the late 1960s, Radio Liberty beamed the writings of Soviet dissidents back into the country. During these tumultuous years, Sosin and his associates saturated the airwaves with the words of Sakharov, Solzhenitsyn, and others, while many dissidents who had emigrated from the Soviet Union joined Radio Liberty to help strengthen its credibility among listeners. Radio Liberty ultimately became the most popular station from the West, its influence culminating with the crucial support of Gorbachev and Yeltsin during the attempted coup against them in August 1991.

As Radio Liberty entered the post-Soviet era, it became a model for the Russian media. It is now a voice for democratic education in the post-Soviet nations—broadcasting from Prague, with local bureaus in several major cities of the former Soviet Union. Capturing the work and legacy of this enterprise with authority and exhilaration, Sparks of Liberty is a testament to an enterprise that saw its message realized and continues to broadcast a message of hope.

“Gene Sosin has produced an animated and readable history of Radio Liberty. He enlivens the story with many deftly written thumbnail sketches of staff members and contributors, providing a virtual who's who of American intellectual life and the Soviet dissident and émigré intelligentsia. It is fortunate for the historical record that Sosin has written this book.”—Robert V. Daniels, University of Vermont

“A well-documented, lively account of one of the most fascinating chapters in the history of the Cold War. Gene Sosin's story of Radio Liberty is a major contribution to the annals of the ideological war between the United States and the Soviet Union that was waged from Stalin's death in 1953 to the dissolution of the Soviet Empire in 1991.”—Maurice Friedberg, University of Illinois at Urbana-Champaign

Gene Sosin, former director of program planning for Radio Free Europe/Radio Liberty, is also a contributing author to Dissent in the USSR (1975) and other books on Russia.