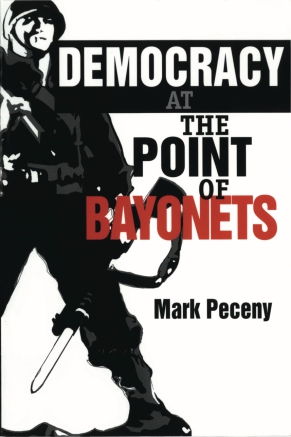 No country has worked harder to coerce others to adopt liberal institutions than the United States. This book examines the promotion of democracy during U.S. military interventions in the twentieth century, showing it to be one of the central ways in which the United States attempts to reconcile the potential contradictions involved in being a liberal great power.

Examining interventions from the Spanish-American War through recent actions in Bosnia, Mark Peceny shows how the United States has encouraged the institution of free elections and other liberal reforms—often at the point of bayonets. Peceny applies statistical analysis to ninety-three cases of intervention and presents six case studies: Cuba and the Philippines after the Spanish-American War, Vietnam during the Kennedy administration, El Salvador during Reagan's first term, and Clinton's interventions in Haiti and Bosnia.

By forging a synthesis of realist and domestic liberal approaches, Peceny illuminates the roles that both security concerns and liberal values play in the formulation and implementation of foreign policy. He shows how presidents often initially choose proliberalization policies to serve U.S. security interests and how Congress exerts pressure when presidents fail to take the initiative. Under these circumstances, he shows, presidents use the promotion of democracy to build domestic political consensus and to legitimize interventions.

Although the United States has failed to promote democracy in most interventions, Peceny demonstrates that it has often had a profound and positive impact on the democratization of target states. His study offers new insight into the relationship between American power, the promotion of democracy, and prospects for the liberal peace in the decades to come.

“Mark Peceny’s book is a welcome contribution to a rather muddy and inconclusive field of inquiry. Peceny’s undertaking is enormously ambitious and wide ranging. . . . He thus restricts the method of democracy promotion to the use of force, and is not concerned with other, ’softer,’ commonly employed techniques, such as assistance programs or even economic sanctions. Limiting the universe in such a way permits rigorous statistical analysis, which, combined with carefully selected, in-depth case studies, sheds considerable light on the dynamics of such interventions.”—Michael Shifter, Latin American Politics and Society

“The book is clearly written and well organized. By combining both quantitative analysis and case studies, Peceny presents the strengths that each approach can offer. The two quantitative chapters report robust findings of multivariate analysis, and the case studies and footnotes provide a wealth of detailed information. . . . I highly recommend this work to scholars and to advanced undergraduate and graduate students interested in U.S. military intervention and democratization.”—Mi Yung Yoon, American Political Science Review (APSR)

Mark Peceny is Associate Professor of Political Science at the University of New Mexico and a contributor to The Peruvian Labyrinth: Polity, Society, Economy, edited by Maxwell Cameron and Philip Mauceri (Penn State, 1997).