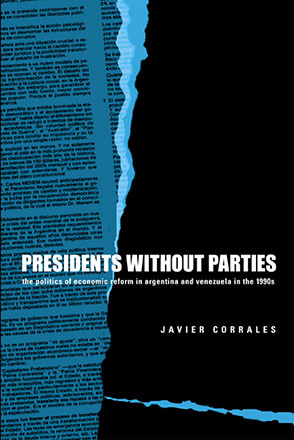 “In Presidents Without Parties, Javier Corrales makes a significant contribution to the growing literature on the comparative political economy of state and market reform. . . . By weaving together arguments from the political science literature on parties and executives with analytical perspectives drawn from rational choice and public choice approaches, this book is ‘controversial’ in the best sense by challenging much of the conventional wisdom and scholarship on the politics of economic reform.”—William C. Smith, University of Miami

Most studies about the politics of economic reform focus on the struggles between the state and interest groups or opposition political parties. In this book Javier Corrales argues instead that the key struggle is between the executive and the ruling party. Deep economic transformations require cooperation from the ruling party. This support allows the state to sustain societal support and simultaneously ward off the potentially paralyzing influence of interest groups. Without such cooperation, the executive loses credibility and the political fortitude necessary to neutralize the opposition from skeptical as well as cost-bearing sectors of society. Presidents Without Parties puts this argument to the test by examining closely what happened in Argentina and Venezuela during the 1990s.

Similarly situated when they embarked on economic reform in 1989, Argentina experienced success, with the reformers reelected in 1995, whereas Venezuela saw its reformers’ efforts fail, leading to a prolonged crisis. Corrales shows precisely how the executive’s relationship with the ruling party shaped the different outcomes in the two countries. He then applies this argument to eight other cases of market reform in Latin American countries in the 1990s.

This book resuscitates and refines the ancient but often forgotten argument that political parties are indispensable for governability. In an era in which it is trendy to discount the usefulness of parties and to celebrate extrapartisan institutions, Corrales offers a reconsideration of the costs of trying to govern in the absence of competitive parties.

“In Presidents Without Parties, Javier Corrales makes a significant contribution to the growing literature on the comparative political economy of state and market reform. . . . By weaving together arguments from the political science literature on parties and executives with analytical perspectives drawn from rational choice and public choice approaches, this book is ‘controversial’ in the best sense by challenging much of the conventional wisdom and scholarship on the politics of economic reform.”—William C. Smith, University of Miami

“This book represents the field of comparative politics at its very best. Javier Corrales argues compellingly that the nature of Executive-ruling party relations is key to understanding the sustainability of market reforms in middle-income developing countries—an insight that has been steadily borne out over the past few years in Latin America. Perhaps most impressive is the amount of original thinking and fieldwork research that went into this project. The book is a welcome addition to any reading list for courses in economic development, comparative politics, and Latin American studies.”—Carol Wise, University of Southern California

“This book will be a required reference for anyone interested in how reform programs are adopted—or rejected—in Latin America. Venezuela and Argentina are fascinating and troubling cases of the political dilemmas faced by presidents in the ebb and flow of political and economic processes.”—Janet Kelly, Caracas, Venezuela

“By focusing on the relationship between the executive branch and the ruling political party, Corrales provides an interesting and ambitious explanation for the recent institutional demise of the two nations. While the details of this relationship differ for Argentina and Venezuela, the overall thesis which Corrales advances is very appealing. . . . Corrales's views do justice to Latin America’s complexity—a complexity which, sadly, is frequently misinterpreted or ignored. . . . He presents an important model for understanding the crisis of governability in Latin America. This is no small feat.”—Leo Zaibert, Times Literary Supplement

“The publication of Javier Corrales’s excellent book is very timely.
In Presidents Without Parties, Javier Corrales has provided an excellent analysis of the distinct outcome of economic reform efforts in Argentina and Venezuela.”—Mark P. Jones, Perspectives on Politics

“This is an excellent book. On occasion it is a bit ostentatiously academic and that might put off undergraduates; but, graduate students and their mentors should find it a valuable contribution to our understanding of modern Latin America.”—Joseph Tulchin, E.I.A.L.

“All scholars working on the topic of policy reform should read this outstanding book, as should all students of Argentina and Venezuelan politics and economics.”—William C. Smith, Perspectives on Politics

Do the Poor Count?

Democratic Institutions and Accountability in a Context of Poverty