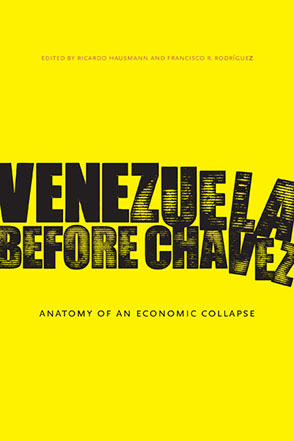 “This objective and expert evaluation of the Venezuelan economy will become an indispensable reference for any future debates on the legacy of the Chávez era.”—Moisés Naím, author of The End of Power

At the beginning of the twentieth century, Venezuela had one of the poorest economies in Latin America, but by 1970 it had become the richest country in the region and one of the twenty richest countries in the world, ahead of countries such as Greece, Israel, and Spain. Between 1978 and 2001, however, Venezuela’s economy went sharply in reverse, with non-oil GDP declining by almost 19 percent and oil GDP by an astonishing 65 percent. What accounts for this drastic turnabout? The editors of Venezuela Before Chávez, who each played a policymaking role in the country’s economy during the past two decades, have brought together a group of economists and political scientists to examine systematically the impact of a wide range of factors affecting the economy’s collapse, from the cost of labor regulation and the development of financial markets to the weakening of democratic governance and the politics of decisions about industrial policy.

“This objective and expert evaluation of the Venezuelan economy will become an indispensable reference for any future debates on the legacy of the Chávez era.”—Moisés Naím, author of The End of Power

“Venezuela Before Chávez is not just a product of scrupulous academic research. It is also, as the authors understand—and as present circumstances in the country attest—a helpful and coherent guide for those who devise policies and make decisions in a country so reliant on oil.”—Michael Shifter, ReVista Magazine

“This is a fine book on Venezuela and its economic and sociopolitical problems during the 20 years preceding the beginning, in 1999, of the Hugo Chávez Frías administration. . . . The story that unfolds in this excellent contribution to the literature is a good one, and the book is likely to become essential reading for understanding Venezuela’s economic decline during the last two decades of the twentieth century.”—Brian McBeth, Hispanic American Historical Review

Ricardo Hausmann is Professor of the Practice of Economic Development and Director of the Center for International Development at Harvard University’s Kennedy School of Government. He served as Venezuela’s Minister of Planning in 1992–93.

Francisco R. Rodríguez is Chief Andean Economist at Bank of America Merrill Lynch. From 2000 to 2004 he served as Chief Economist of the Venezuelan National Assembly.

Chapter 2: Why Did Venezuelan Growth Collapse?

Chapter 3: Venezuela After A Century of Oil Exploitation

Chapter 5: The Incidence of Labor Market Reforms on Employment in the Venezuelan Manufacturing Sector 1995–2001

The Real Effects of a Financial Collapse

Chapter 9: Competing for Jobs or Creating Jobs? The Impact of Immigration on Native-Born Unemployment in Venezuela, 1980-2003

Chapter 10: Sleeping in the Bed One Makes: The Venezuelan Fiscal Policy Response to the Oil Boom

Chapter 11: Institutional Collapse: The Rise and Decline of Democratic Governance in Venezuela

Chapter 12: The Political Economy of Industrial Policy in Venezuela

Chapter 13: Explaining Chavismo: The Unexpected Alliance of Radical Leftists and the Military in Venezuela under Hugo Chávez

Chapter 14: Oil, Macro Volatility and Crime in the Determination of Beliefs in Venezuela

The twentieth century saw the transformation of Venezuela from one of the poorest to one of the richest economies in Latin America. Between 1900 and 1920, per capita GDP had grown at a rate of barely 1.8%; between 1920 and 1948, it grew at 6.8% per annum. By 1958, per capita GDP was 4.8 times what it would have been had Venezuela had the average growth rate of Argentina, Brazil, Chile, and Peru (calculations based on Maddison 2001). By 1970, Venezuela had become the richest country in Latin America and one of the twenty richest countries in the world, with a per capita GDP higher than Spain, Greece, and Israel and only 13% lower than that of the United Kingdom (Heston, Summers, and Aten 2002).

In the 1970s, the Venezuelan economy did an about face. Per capita non-oil GDP declined by a cumulative 18.64% between 1978 and 2001. Because this period was associated with growth in labor force participation, the decline in per worker GDP was even higher: 35.6% in the twenty-three year period. The oil sector’s decline was even more pronounced: 64.9% in per capita terms, 49.2% in per worker terms from its 1970 peak.

Venezuela’s development failure has made it a common illustration of the “resource curse”—the hypothesis that natural resources can be harmful for a country’s development prospects. Indeed, Venezuela is one of the examples Sachs and Warner (1999, 2) use to explain the idea that resource-abundant economies have lower growth. But Venezuela’s growth experience has not only been used to illustrate the deleterious effect of resource rents. Easterly (2001, 264), for example, cites the Venezuelan decline in GDP in support of the idea that inequality is harmful for growth. Becker (1996), in contrast, has argued that the same growth performance actually shows that economic freedom is essential for growth.

How much do we really know about what caused the Venezuelan growth collapse? In our view, a minimal requirement of any explanation for Venezuela’s dismal growth performance must pass two basic tests. On the one hand, it must explain why Venezuela has had such a disappointing growth performance in comparison to the rest of Latin America. On the other hand, it must explain why Venezuela did so poorly after the 1970s when it had been able to do so well in the previous fifty years.

Many existing explanations do not pass these tests. For example, Venezuela’s failure to grow is often attributed to its lack of progress in carrying out free-market reforms during the eighties and nineties. While Venezuela is indisputably far from a stellar reformer, existing data do not support the hypothesis that it is substantially different from many other countries in the region in this respect (at least until 1999). According to Eduardo Lora’s (2001) index of economic reform, the Venezuelan economy by 1999 was more free market-oriented than the economies of Mexico and Uruguay, and its speed of reform (in terms of proportional improvement in the index) was actually the median for the region between 1985 and 1999. Lack of reforms thus does not appear to be a promising explanation for Venezuela’s lack of growth.

Alternatively, consider the hypothesis that Venezuela’s growth problems are due to the exacerbated rent-seeking that was generated by the concentration of high resource rents in the hands of the state. If this explanation is correct, then how do we account for the fact that Venezuela was the region’s fastest-growing economy between 1920 and 1970, a period during which the role of oil was dominant and fiscal oil revenues were significantly higher than during the nineties? Why were corruption, patronage politics, and rent-seeking not a hindrance to development during Venezuela’s golden age of growth?

The purpose of this volume is to present a critical analysis of the Venezuelan growth experience and to attempt to offer new explanations of the enigma of the country’s economic collapse. It is a collective undertaking by economists and political scientists to attempt to gain insight into the causes of Venezuela’s growth performance by systematically analyzing the contribution of each potential factor in the country’s growth performance. Each chapter consists of an in-depth analysis of one dimension of the growth collapse, ranging from labor markets to infrastructure provision to the political system. While each chapter reflects the vision and analysis of the authors, they are shaped by the interaction and discussion between project participants that took place in two conferences held in Caracas in 2004 and in Cambridge in 2006 sponsored by the Center for International Development and the David Rockefeller Center for Latin American Studies at Harvard University, the Andean Development Corporation, and the Instituto de Estudios Superiores de Adminstración.

From Windfall to Curse?

Oil and Industrialization in Venezuela, 1920 to the Present