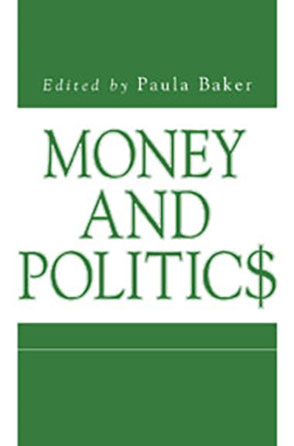 “Money and Politics makes a unique and significant contribution to the literature concerning the history of U. S. campaign finance.”—Frank L. Davis, Perspectives on Political Science

That large financial contributions distort American politics and American democracy is an idea that stands as a truism in political debate. It has fired reform movements; it has inspired round after round of efforts to limit who can give to candidates and parties, how much they can give, and how much campaigns can spend. The laws have generated constitutional arguments about free speech, a still inconclusive literature on whether contributions actually shape policy, and a great deal of work for lawyers and financial analysts who monitor compliance. In the wake of Enron's collapse and subsequent revelations about that corporation's involvement with policy makers, the public's attention has once again focused on the role that money plays in politics. Little of the scholarly work (and none of the legal work) is historical. Yet history can shed light on the long-running debate about the impact of money on politics and what, if anything, are plausible policy options.

This collection of original essays is a step in that direction. The chapters cover episodes from the early nineteenth century through the 1970s. They illustrate how deep concern about money in politics runs—and how the definition of the problem has changed over time. Through the nineteenth century, the "spoils system" in which party loyalists gained reward for their efforts appeared to be the evil that blocked responsive parties and honest public administration. Party war chests that brought howls of complaint (and great exaggeration) seemed quaint by the middle of the twentieth century. In part because reform had weakened the parties and campaigns required consultants' skills in coordination and in part because television advertising was so expensive, the cost of campaigns rose. Candidates griped and policy entrepreneurs worked out possible solutions, which were in place before the Watergate scandal focused public attention on campaign finance. In the history of campaign-finance reform, one generation's solutions have tended to become another's problem. Contributors to the volume are Paula Baker, Robert Mutch, Mark Wahlgren Summers, and Julian E. Zelizer.

“Money and Politics makes a unique and significant contribution to the literature concerning the history of U. S. campaign finance.”—Frank L. Davis, Perspectives on Political Science

Paula Baker is Associate Professor of History at the University of Pittsburgh. She is the author of Moral Frameworks of Public Life (1991).

1. Campaigns and Potato Chips; Or Some Causes and Consequences of Political Spending

3. "To Make the Wheels Revolve We Must Have Grease": Barrel Politics in the Gilded Age

Money in politics is a funny thing. By legend and cliché, money is the “mother’s milk of politics,” that which keeps party machinery working and campaigns running. It is also the focus of generations of suspicion and complaint. From the advent of the “spoils system” in the early nineteenth century to the PACs and “soft money” of today, there appear to be few takers for the proposition that money does not stain what ought to be the majesty and purity of politics. Money, unlike the suffrage, introduces inequality among citizens.

Money gives its favored candidates and policies an unfair advantage

for the public’s attention. Money is the appearance, if not the fact,

Such sentiments may be widely yet lightly held. Only on rare

occasions—perhaps during the early twentieth-century furor over

the connections between business and politics—has the matter of

priorities. Rather, it is an issue that has animated people in or

near the political action. Even then, it has usually taken dramatic

example—to bring reforms into focus. For the wider public, the idea

the sense that there are more important issues.

In this historians perhaps mirror public sentiment. While campaign

finance has been a fairly consistent interest of political scientists,

few historians have given the subject sustained attention.

Matthew Josephson told lurid stories about the venality and greed

in this issue and elsewhere, places in a more realistic light);

accounts of the election of 1896. Campaign finance merits some discussion

in a great number of accounts of elections and politicians,

but Clifton K. Yearley’s 1970 The Money Machines stands out as a

sustained treatment of the subject.1

Still, there are signs of growing interest in the history of campaign

finance, and that history ought to be of interest to policy historians.

in a direct way? Studies of contemporary legislators cast doubt on

the idea of systemic influence. The essays in this collection suggest

that historically, too, a few politicians may have been on the take,

but that selling policy to the highest bidder was not standard procedure.

Some early nineteenth-century legislators worried about the

corrupting power of patronage and, to a lesser extent, assessments of

government workers (though not enough of them did so to block

the practices). Later in the nineteenth century, newspaper editors

retold wild stories about the wealth of the opposition, but party leaders

got wealthy benefactors to open their wallets with difficulty. And

then, their luck was best with businessmen who already supported

contributions aimed at lessening labor’s influence on the Democratic party.2

It is nonetheless hard to put aside the assumption that large

amounts of money must somehow have a loud voice. If nothing else,

dissuading good people from running for office; perhaps in taking

unpopular positions. Democrats and Republicans alike in the 1960s

the time they had to spend raising it—time that otherwise, presumably,

would go to the public’s work. Nineteenth-century candidates,

Summers points out, also needed to pay their share to their party’s

coffers. Earlier in the century, personal wealth seemed perhaps even

more important to a political career. How the fund-raising barrier to

entry to a political career stacks up against others—say, a willingness

to campaign and seem to get nowhere near the respect deserved

To put the money and political influence question another way,

has reform made a difference in the kind of politics or policy we get?

Have voters been wise to put issues (or character) above process

questions like campaign finance in their hierarchy of concerns?

History can add perspective to the contemporary debate about

campaign finance. We might learn not merely that money has always

had a place in American politics, but that the kinds of concerns

that policymakers had changed through time. Robert Mutch’s

essay, on the debate about patronage and assessments in the 1830s,

about businessmen and their corrupt political cronies. By analyzing

the uses and sources of funds, however, he also provides a fascinating

account of how late nineteenth-century politics worked. My essay

and the 1954 California gubernatorial race, to illustrate how fundraising

along with raising a workforce can tell us about changes in

the ways campaigns try to connect with voters. What can campaign

the Watergate scandal—tell us about Americans’ cynicism about

politics and government? He also points out that campaign finance

reform works as a case study of policymaking: a case where policy

entrepreneurs without substantial backing from either politicians or

an outraged public shaped the debate.

The history of campaign finance seems to leave us with a puzzle.

seem to potentially corrupt democracy. Yet the question arose when

mass parties, in contrast to the earlier clusters of elites, pulled men

below the moneyed classes into political office. The loudest complaints

about systems of fundraising have come from politicians and

their allies themselves, often for partisan purposes, and from relatively

elite groups, such as academics and political commentators.

with democratic participation, but it can alert us to some of the pitfalls