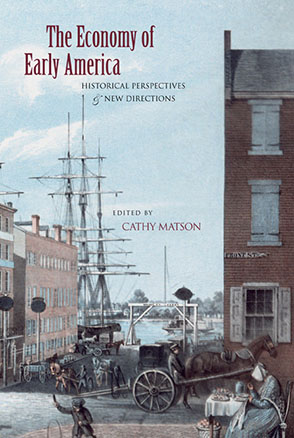 In recent years, scholars in a number of disciplines have focused their attention on understanding the early American economy. The result has been an outpouring of scholarship, some of it dramatically revising older methodologies and findings, and some of it charting entirely new territory—new subjects, new places, and new arenas of study that might not have been considered “economic” in the past.

“The Economy of Early America offers a stimulating overview of recent historical writing on the economic history of early America.”—Richard R. John, William and Mary Quarterly

“With such a diversity of topics, any reader will find it hard to challenge Matson’s vibrant depiction of early American economic history and its potential to continue to make substantial contributions to our understanding of the past. Whatever quibbles readers may have with the individual essays, this volume undoubtedly will inspire new scholars to consider, as well as old scholars to reconsider, the value of economic history to historical inquiries, which is precisely the book’s purpose.”—Troy Bickham, Itinerario

“As this volume documents, the economy, whether measured through numbers, words, or some combination of the two, deserves more attention from scholars who would not necessarily consider themselves economic specialists. At the very least, Matson’s sweeping survey of the field should be required reading for every graduate student of early American history, whatever their research interests.”—Jessica Lepler, Journal of the Early Republic

Cathy Matson is Professor of History at the University of Delaware and Director of the Program in Early American Economy and Society at the Library Company of Philadelphia.

1. A House of Many Mansions: Some Thoughts on the Field of Economic History

2. Rethinking The Economy of British America

5. Indentured Servitude in Perspective: European Migration into North America and the Composition of the Early American Labor Force, 1600–1775

7. Moneyless in Pennsylvania: Privatization and the Depression of the 1780s

8. Creative Destruction: The Forgotten Legacy of the Hessian Fly

9. The Panic of 1819 and the Political Economy of Sectionalism

10. Toward a Social History of the Corporation: Shareholding in Pennsylvania, 1800–1840

12. The Unfree Origins of American Capitalism

Eleven chapters in this volume began as papers prepared for distribution and discussion at the Wrst conference of the Program in Early American Economy and Society (PEAES) in April 2001. The two-day conference, ambitiously titled “The Past and Future of Early American Economic History: Needs and Opportunities,” discussed, in all, twenty-two papers that oVered varied perspectives on economic history written since 1985, and suggested directions for future research. Conference participants were asked to self-consciously place their work in the context of both previous scholarship and today’s debates, and to lay this work before an open forum of people from many academic disciplines. In keeping with the economy program’s objectives of nurturing the study of economic issues from the colonial through the antebellum era, using an expansive deWnition of “economic history,” the authors in this volume oVer diverse approaches and arguments. I wrote the introductory chapter separately in order to provide a much longer range assessment of economic history’s contested terrain, and

to offer a bird’s-eye view of the many directions that the historiography of this Weld has taken.

At the outset, some conference participants were asked to assess a particular pathbreaking contribution or a long-standing point of view; some were asked to evaluate a Weld of scholarship; and some were asked to explain how their empirical research and conceptual approach to an economic issue adds fresh insights to the Weld. The authors bring to this volume their training and inspiration from various methodologies that originate in economic theory and econometrics, but also include cultural studies, political economy, and social and intellectual history. Their arguments are at once sweeping and particular. As with all good history, economic or otherwise, some chapters emulate and expand upon the spadework of historians who preceded them, while others engage in current dialogues or explicitly seek to redirect work in economic history toward new questions and evidence. Some reconsider past scholars’ contributions to the Weld; others investigate new subjects or new places of negotiation and development that have not been considered “economic” in the past. Although readers may see the imprint of traditional economic history from time to time, most of the authors in this volume are immersed in scholarly dialogues that PEAES has sought to promote, dialogues about a broadly conceived role in the Weld of economic history for the Atlantic world economy, regional comparisons of colonial and early national development, the relationship of emerging economic institutions to early America’s rapid ascent in the global economy, the nature of population and migration patterns, popular perceptions of credit and debt, the role of age and gender in household economies, labor and production relations, and many other topics.

The present volume does not attempt to provide a synthesis of all current work in economic history, and the authors do not agree on one interpretation of the historical past in economic terms, especially on such matters as the pace and character of economic growth, the nature and signiWcance of a “transition to capitalism” or a “market revolution,” or the assumptions we make about economic rationality, markets, or the role of governments. However, while the essays do not encompass all the issues or approaches in the Weld of economic history, they do represent certain bands of light along a rich spectrum of recent work that illuminate our past contributions and point toward new “needs and opportunities” in scholarship on the economy of British North America down to the 1850s. As a result, each essay places at the reader’s Wngertips valuable sources for understanding past and current debates, as well as areas in need of further investigation.