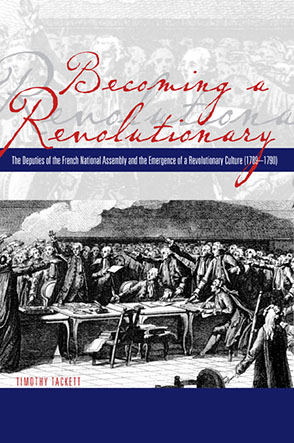 “Narratives abound of France’s first legislature, the Estates General of 1789, which became the Constituent Assembly of 1789–1791. None involve the detailed research that this coherent, collective biography of its total 1,315 deputies represents. Timothy Tackett has combed the public and private archives of France to find over 150 separate collections of deputies’ correspondence. . . . Tackett’s book is essential reading for anyone interested in the origins of that revolutionary France.”—Emmet Kennedy, American Historical Review

Winner of the 1998 Leo Gershoy Prize from the American Historical Association for the best book in Early Modern European History.

Winner of the Leo Gershoy Prize from the American Historical Association, 1998, for the best book in Early Modern European History.

Timothy Tackett’s Becoming a Revolutionary revisits one of the most controversial moments in history: the beginning of the French Revolution. How did it arise? Why did French men and women become revolutionaries? To answer these questions, Tackett focuses on the experiences of the 1200 members of the first French National Assembly. Drawing upon on a wide range of sources, including contemporary letters and diaries, Tackett shows that the deputies were a group of practical men, whose ideas were governed more by concrete subjects than by abstract philosophy. Though it may seem surprising now, most of the deputies were actually in support of the king. Instead of being initiated as a result of a specific ideology founded on Enlightenment principles, the ideas that eventually led to the French Revolution were, instead, a direct result of the actual process of the Assembly.

First published in 1996 and hailed as an “exemplary product of the historian’s craft,” Becoming a Revolutionary is now available in paperback for the first time.

“Narratives abound of France’s first legislature, the Estates General of 1789, which became the Constituent Assembly of 1789–1791. None involve the detailed research that this coherent, collective biography of its total 1,315 deputies represents. Timothy Tackett has combed the public and private archives of France to find over 150 separate collections of deputies’ correspondence. . . . Tackett’s book is essential reading for anyone interested in the origins of that revolutionary France.”—Emmet Kennedy, American Historical Review

“For two hundred years, historians have vigorously debated a basic enigma of the French Revolution: how a group of men without a preconceived goal, divided in their intentions as well as their backgrounds, managed to come together in an undertaking that ultimately led to the overthrow of the Old Regime. In this meticulously documented and convincingly argued study, Timothy Tackett has made a major contribution to this historical debate. . . . By his richly detailed charting of the transformations which occurred in the attitudes of these deputies, Tackett has provided valuable insight into how their reactions to the political contingencies and social interactions which they experienced ultimately turned them into revolutionaries.”—Jo Ann Browning Seeley, Catholic Historical Review

“This book is an exemplary product of the historian's craft, exhibiting a mastery of a vast array of sources, including some 57 public and private archives. Building on this evidential base, Tackett speaks to fundamental issues in the historiography of the French Revolution.”—Alan B. Spitzer, Annals of the American Academy of Political and Social Science

“Timothy Tackett’s book is a critical intervention in the debate on the French revolution. It stands eloquent testimony to an emerging post-revisionist current, one that seeks to reveal the empirical inadequacy of the revisionist case.”—James Livesey, H-Net Book Reviews

“A new book by Timothy Tackett is always one to be welcomed, for he is at once an able writer, a respected scholar, and a pioneer in the art of applying a new methodology to major problems in socio-political history. Moreover, in this book, which is as informative in detail as it is authoritative in substance, he brings his fresh approach to a particularly crucial question, that of the composition and character of the Constituent Assembly, the first national parliament of Revolutionary France.”—Michael Sydenham, Social History

“By exhaustive and resourceful combing of archives and libraries throughout France, Tackett has unearthed far more evidence about the views of the members of the National Assembly than anybody before him. . . . In every sense, this book shows that, even on topics about which we thought we knew everything, the last word has not been said.”—William Doyle, Journal of Modern History

“A major contribution to the history of the French Revolution.”—Sarah Maza, Journal of Interdisciplinary History

“Tackett reintroduces a social dimension to revolutionary politics. . . . His provocative book both challenges many of the ‘revisionist’ arguments and raises questions about the interpretation of the Revolution.”—Mike Rapport, History

Timothy Tackett is Professor of History at the University of California, Irvine. His most recent book is When the King Took Flight (2003).

The Enigma of the Revolution

The Witnesses and Their Testimony

1. THE THREE ESTATES: A Collective Biography

2. A Revolution of the Mind?

The Deputies and the Enlightenment

Deputy Publications before the Revolution

The Religious Culture of the Deputies

Birth of the Aristocratic Party

The Electoral Assemblies of 1789

Third Opinion on the Eve of the Estates General

Noble Opinion on the Eve of the Estates General

4. The Creation of the National Assembly

The Clerical Estate and the Dominance of the Episcopacy

The Noble Estate and the Culture of Intransigence

The Breton Club and the Emergence of a Third Consensus

5. The Experience of Revolution

The Deputies and the King

The Night of August 4

6. Fractional Formation and the Revolutionary Dynamic:

The September Debates and the Limited Victory of the Right

The October Days: Break and Continuity

The Formation of the Jacobins

7. The Deputies as Lawgivers

The Struggle for Self-Definition

8. Jacobins and Capuchins: The Revolutionary Dynamic through April 1790

The Deputy Outlook after October

Political Alignments at the Beginning of 1790

The Advance of the Left through February 1790

The Religious Question and the Abortive Resurgence of the Right

9. To End a Revolution

Division of the Left and the Triumph of ’89

Commemorating the Revolution: The Federation of 1790

Marriage Dowries of Deputies in Livres